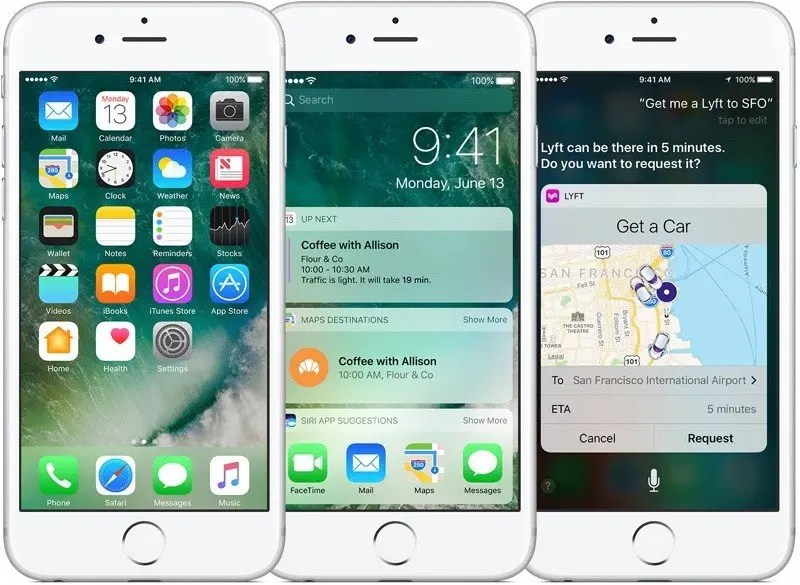 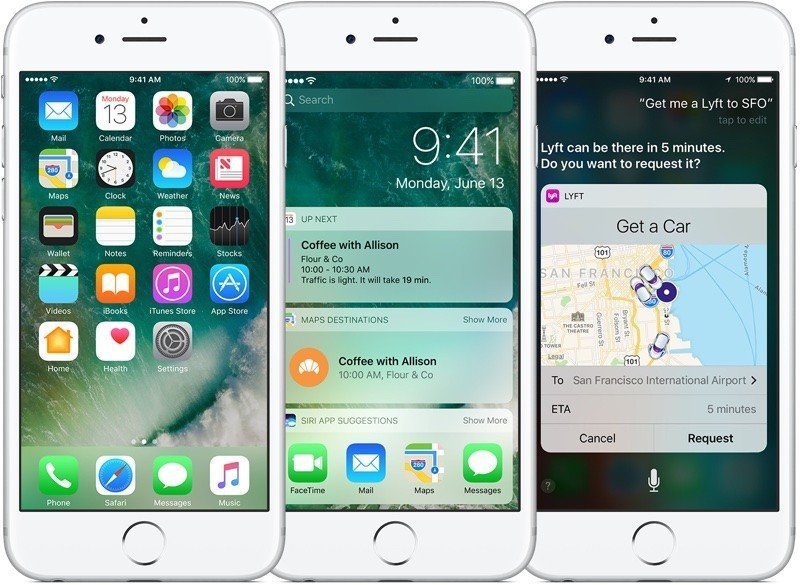 Apple released iOS 10, for the iPhone, iPad, and iPod touch, on September 13, 2016. According to Apple CEO Tim Cook, iOS 10 is the “biggest release ever” for iOS users, with major updates for a wide variety of apps, services, and features, including Messages, Siri, Photos, Maps, Apple Music, News, Apple Pay, Control Center, and more.

The release arrives after weeks of beta seeds, both for developers and public beta testers, and brings with it a plethora of new features.

iOS 10 features a redesigned Lock screen with 3D-touch enabled notifications that offer up more information, a more easily accessible camera, and a new widgets screen that houses widgets formerly located in the Today section of the Notification Center.

A dedicated “Home” app is available for HomeKit devices, and you can now delete almost all pre-installed apps that are unneeded. Photos features impressive facial and object recognition capabilities, which power a new Memories feature for rediscovering forgotten moments.

Both Maps and Apple Music have been redesigned with cleaner interfaces that are simpler to use, with Maps gaining proactive suggestions and integrated third-party apps and Apple Music gaining better content discovery and a new focus on lyrics.

Apple is working on the next-generation version of iOS, iOS 11, and for that reason, iOS 10.3.3 may be the final update that is released for the iOS 10 operating system.

The Lock screen experience is all new in iOS 10, with a new Widgets side panel, a redesigned Control Center, revamped notifications, and the removal of the “Slide to Unlock” feature.

With the introduction of super fast Touch ID in the iPhone 6s and later, many users were bypassing their Lock screens and thus their notifications before being able to view them, so Apple implemented some changes to make things easier.

Incoming notifications have been enhanced with 3D Touch capabilities on the iPhone 6s and later, allowing users to do more without leaving the Lock screen, like viewing photos and videos and responding to incoming iMessages.

Apple introduced a SiriKit SDK in iOS 10, which allows Siri to be integrated into third-party apps for the first time. With third-party app support, Siri is able to do more than ever before. Commands like “Get me an Uber to SFO” or “Send Sarah $20 with Square Cash” or “Call mom with Skype” are all available. Siri’s new functionality has been described as “long over-due” and a feature that makes the personal assistant much more useful in everyday life. 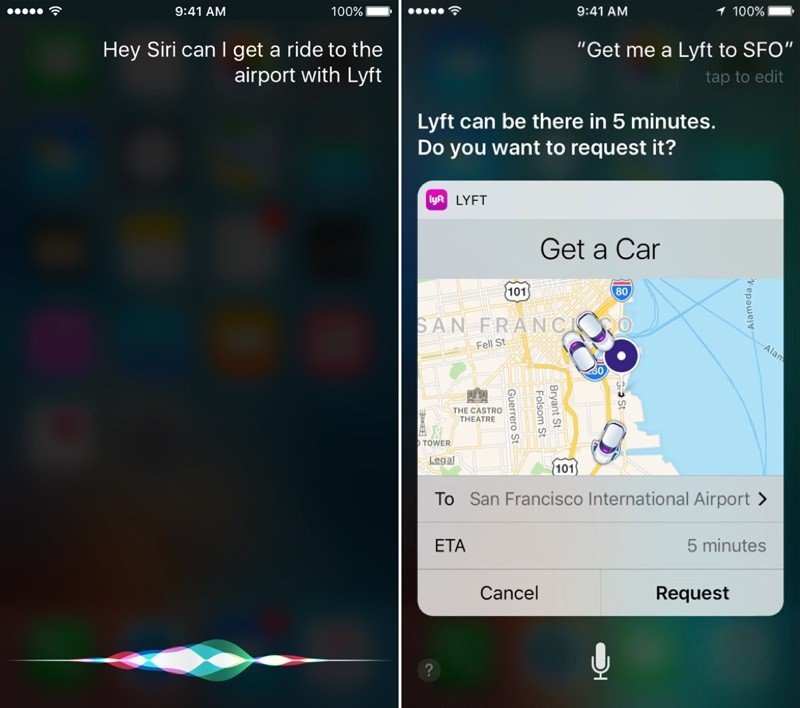 Functionality in SiriKit is limited to these types of apps to allow Apple to keep a tight rein on privacy, control the Siri experience, and develop Siri’s understanding of language and context, but it in the future, Apple plans to expand it to encompass other types of apps.

Siri intelligence has been expanded to the keyboard in iOS 10 with new contextual predictions to bring up suggestions in apps like Messages and Mail based on information like location and calendar availability or contacts.

QuickType also supports multiple languages without the need to switch keyboards, a feature that’s handy for anyone who regularly sends messages in two or more different languages. It’s able to automatically detect when a user changes languages.

People have long wanted a way to delete the apps that come pre-installed on iOS devices to get rid of icons for apps that aren’t in use, and in iOS 10, that’s finally possible.

Many built-in iOS apps in iOS 10 have been moved to the iOS App Store as standalone downloads, allowing them to be deleted and re-downloaded at will. 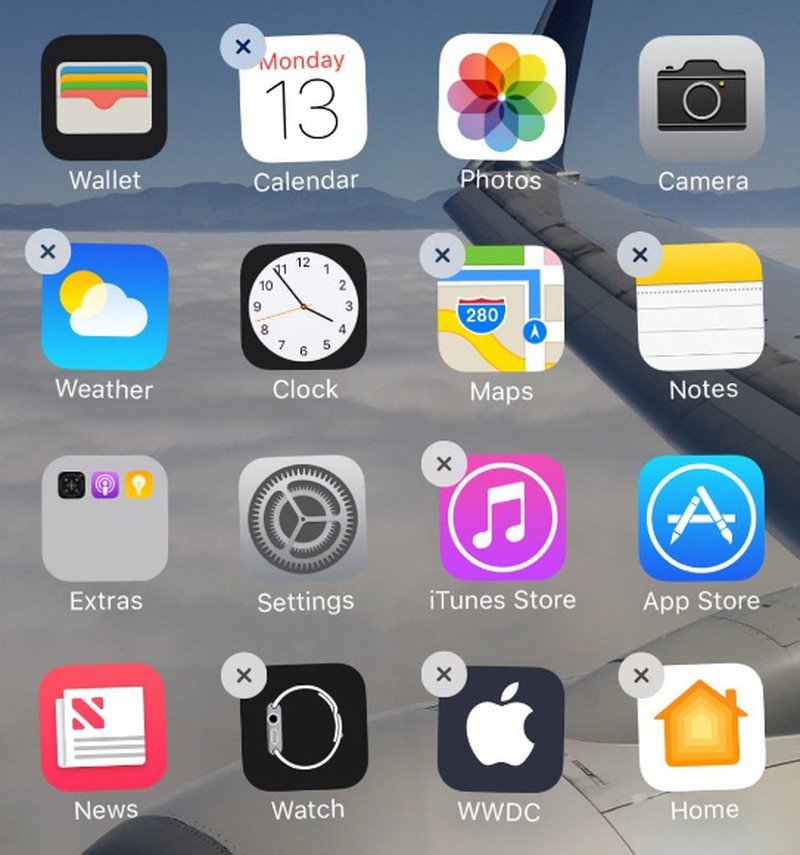 Apps that are “removed” from an iOS device aren’t technically deleted because they are still part of the base operating system, so it’s better to think of them as hidden. Removing the built-in apps deletes user preferences and necessary hooks, but the underlying binaries remain. For that reason, these apps are not updated through the App Store and re-downloading them simply restores the hidden functionality.

Apple has given the Message app a lot of attention in iOS 10, introducing new features to make iMessages more personal, emotive, and fun.

iMessages can be sent with an animated background, like balloons, confetti, and fireworks, or they can be emphasized with a “Bubble Effect,” designed to slightly tweak the animation of a received message to convey emotions like “loud” and “gentle.” There’s also an “Invisible Ink” Bubble Effect for a surprise-like impact, with text that remains hidden until a finger is swiped across it, and you can add quick “Tapback” replies to messages in the form of a heart, a thumbs up, and more by double tapping on a chat bubble. 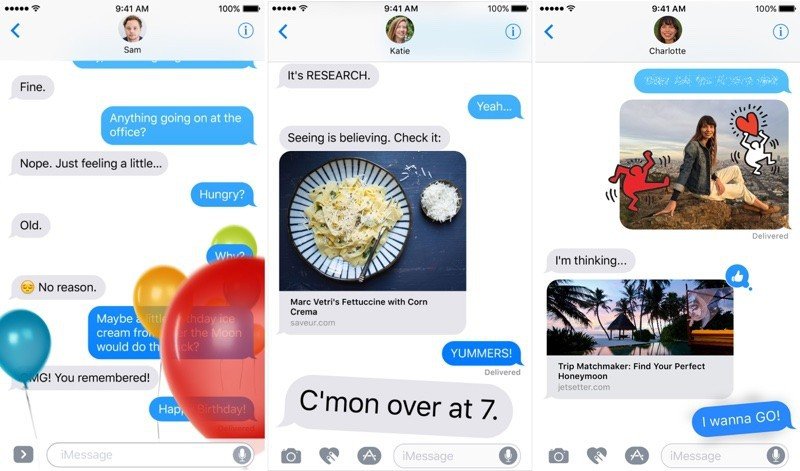 Digital Touch is now available in Messages. With Digital Touch, you can send drawings, heartbeats, and taps to friends, and on iOS devices, Digital Touch can incorporate photos and videos that you can draw on.

iOS 10 brings a fun new emoji prediction feature to the keyboard. When typing, you’ll get emoji suggestions right alongside words, and if you type a sentence and then switch to the emoji keyboard, all words in your sentence that can be replaced with emoji are highlighted. Tapping them turns them to emoji.

One minor but wished for feature has been added to Messages in iOS 10: Individual Read Receipts. You can now set read receipts on a per person basis, turning them on for some individuals and off for others.

The Photos app in iOS 10 has been updated with what Apple calls “Siri intelligence,” which equates to new deep learning algorithms and advanced facial and object recognition techniques, aka computer vision. 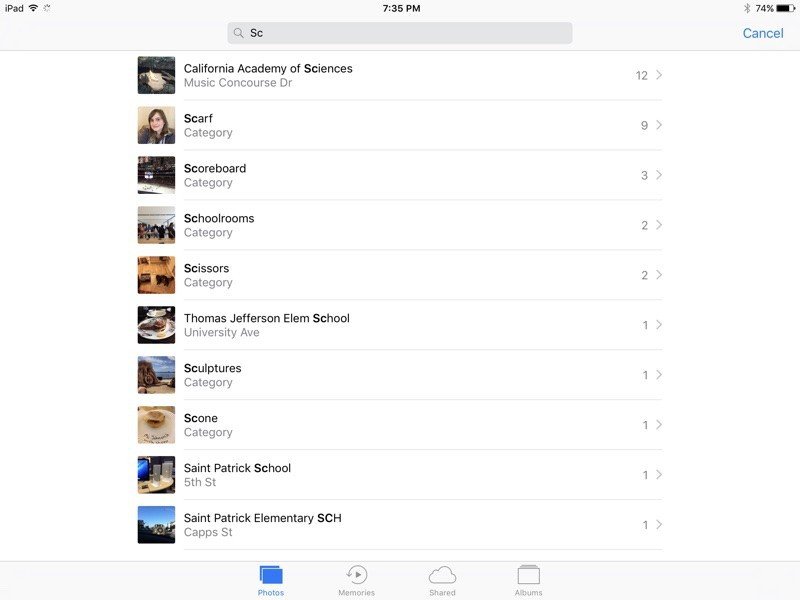 Using these tools, Photos is able to scan a user’s entire photo library, intelligently detecting people, animals, places, objects, and more. Based on this information, Photos groups images together to enable powerful search capabilities, allowing users to search through their images by topic.

Apple added a standalone “Home” app in iOS 10, designed to control all of a user’s HomeKit-connected products in one central spot. Home, available on the iPhone and iPad, offers quick access to favorite HomeKit scenes and accessories, plus a list of all rooms to make it simple to control several accessories at once.

With the Home app, either an Apple TV or an iPad can be set as a Home Hub to allow HomeKit accessories to be used when away from home. There’s also a section to create automated routines to do things like turn the lights on at specific times.

Home is also built into the iOS Control Center, allowing users to access their smart home devices without needing to open an app.

Apple Music has been redesigned with a simpler interface that makes it easier to find new content to listen to. Tabs now include “Library,” “For You,” “Browse,” and “Radio,” for better content discovery, and a new “Search” tab makes searching for songs and albums quicker. 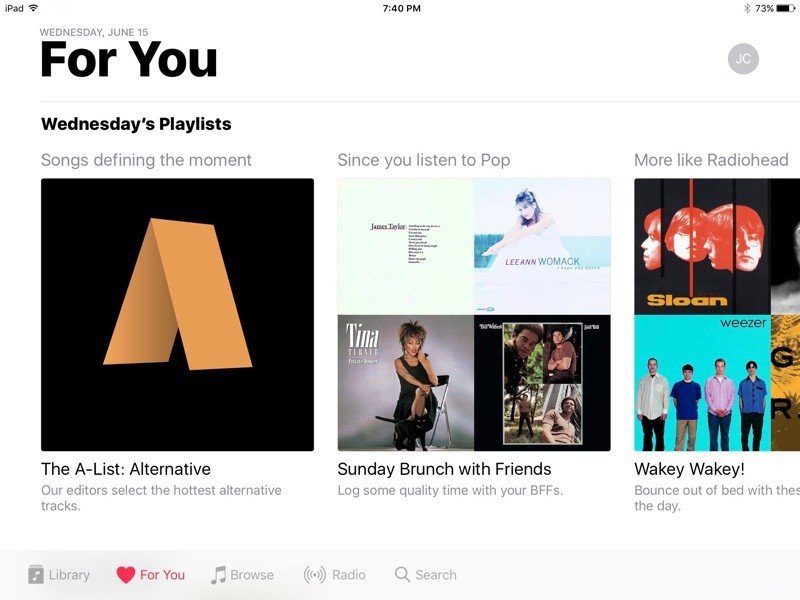 Apple News features a bolder, simpler interface to put content front and center. The main “For You” section has been broken up into smaller topic-based sections and improved organization to make it easier to keep up with incoming stories. “For You” features all of the topics a user follows, “Trending News,” with current popular stories, and “Featured News” with suggestions hand-picked by Apple’s editors. 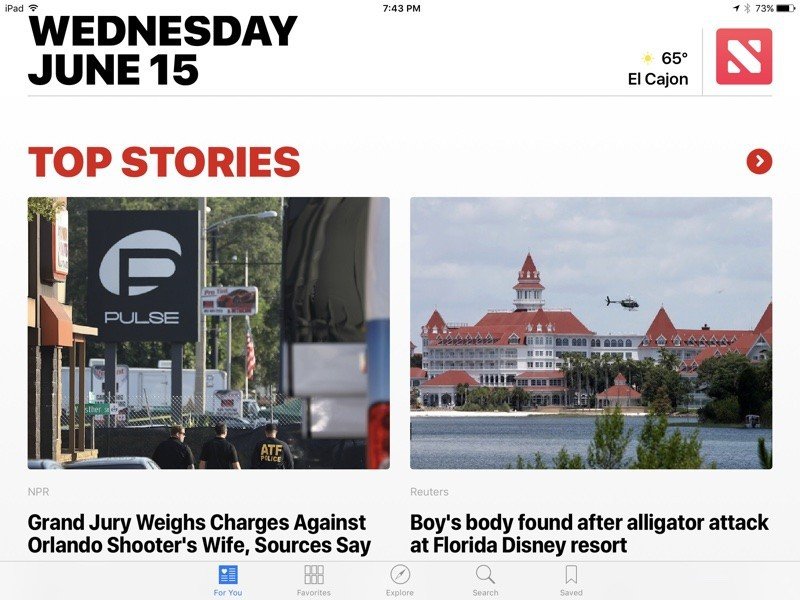 Apple News now sends notifications whenever there’s a must-read breaking news story, and it supports subscription-based publications so you can read content from The Wall Street Journal and other paid sites right alongside free content.

Mail has a new look with threaded conversations, which link multiple messages together in a single page. On the 12.9-inch iPad Pro, which has more screen real estate than other devices, Mail uses the same three-column view that’s available on desktop machines.

With threaded conversations, there are options in the Settings menu to display the oldest message or the newest message first, and for those who don’t care for message threading, it can be turned off.

Maps has been redesigned with easier to access controls, destination suggestions that are front and center, and more prominent feedback tools. Maps now features traffic information en route and a dynamic view that pans in and out to allow users to look ahead to what traffic conditions are like. 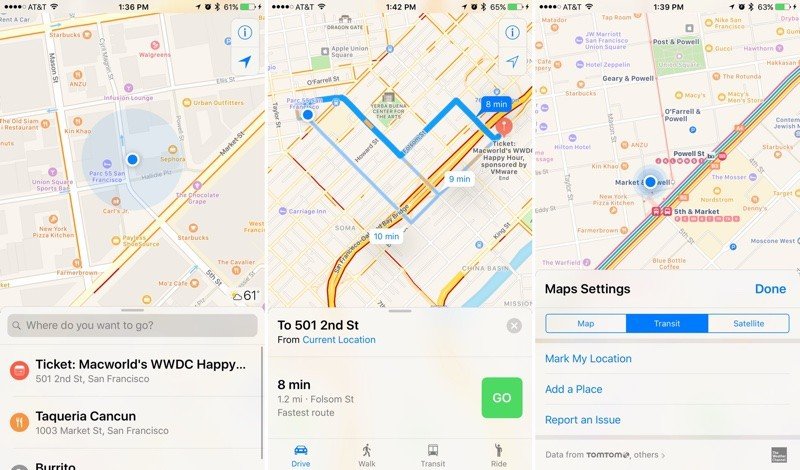 iOS 10 includes Maps extensions for developers, so apps can integrate directly with the Maps app, letting users do more without having to open multiple apps. For example, with OpenTable integration, Maps can be used to book a dinner reservation, and with Uber integration, a user can call an Uber without leaving the Maps app.

A “TV” app was introduced in iOS 10.2, replacing the Videos app. The TV app serves as a central hub for all TV and movies on iOS devices, bringing access to iTunes, purchased content, and a range of apps that offer both free and subscription TV and movies.

Apple’s TV app is currently only available in the United States. Other countries continue to have the standard Videos app.

Following a beta testing period that spanned several months, iOS 10 was released to the public on Tuesday, September 13, three days ahead of the launch of the iPhone 7.