eMMC vs SSD Storage: Everything You Need to Know 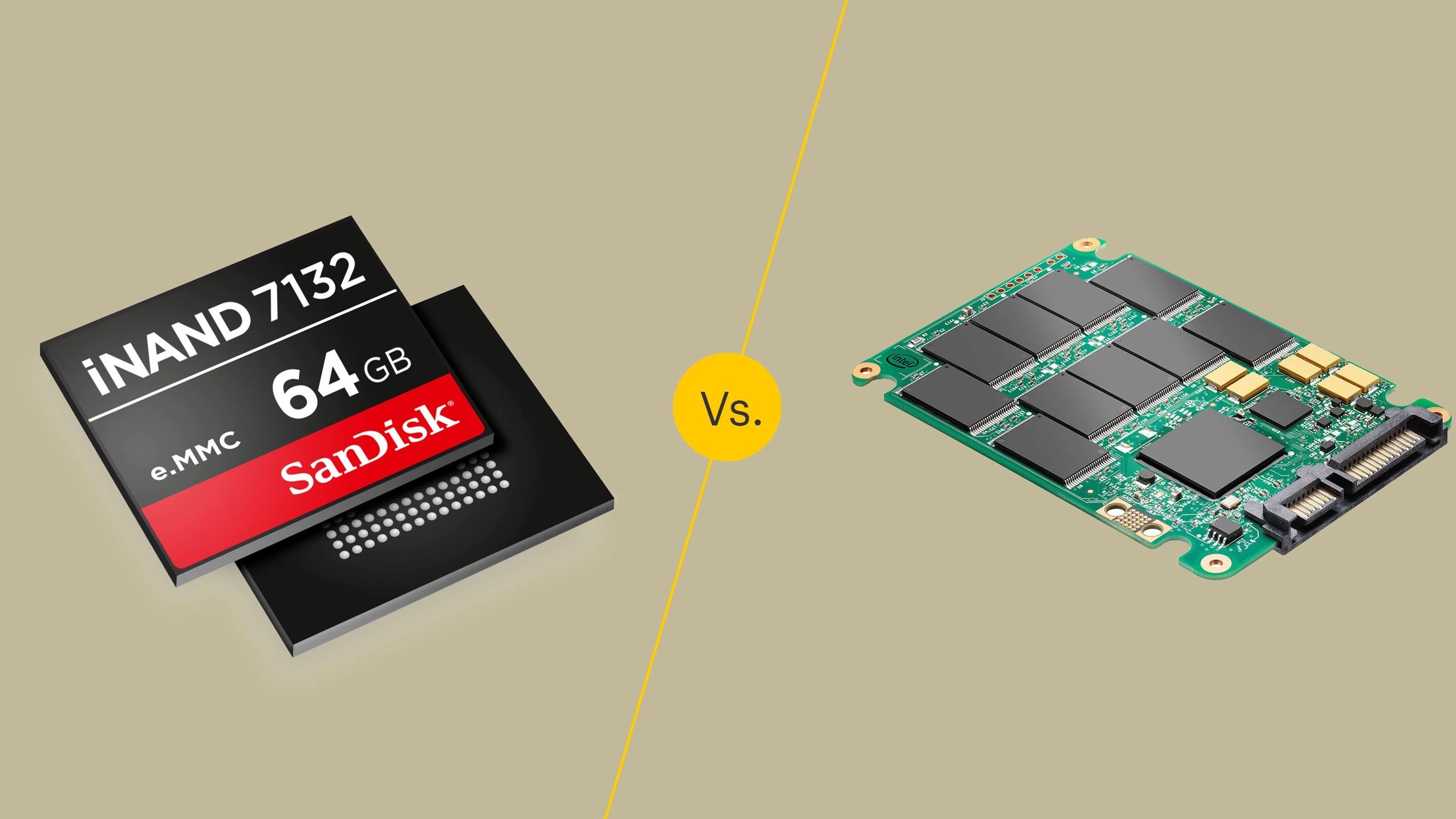 Embedded MultiMediaCard (eMMC) and solid-state drive (SSD) storage have a lot in common, including the use of NAND flash memory. However, SSDs almost always deliver superior performance and are available in far larger sizes for bulk storage. In most cases, if you’re not shooting for a budget PC, we recommend opting for an SSD over eMMC storage. This article explains the differences between eMMC vs. SSD Storage and everything else you need to know.

In fact, when it comes to laptop PC storage, four different storage types come to your minds: SSD, HDD, Hybrid hard drive and eMMC. But how much do you know about them?

Generally speaking, eMMC is one variant of MMC which is a memory card standard used for solid-state storage. MMC has various variants: RS-MMC, DV-MMC, MMCplus and MMCmobile, MMCmicro, MiCard, SecureMMC and eMMC, etc.

eMMC full form refers to embedded MultiMediaCard. It is an internal storage card which is widely used in portable devices because of its relatively low price and small size.

eMMC is used in portable devices such as smartphones, digital cameras, entry-level laptops, tablets, even some removable devices. You can also use eMMC on computers or laptops. There is one thing special about eMMC: you can enlarge the internal storage capacity of a laptop equipped with EMMC by inserting a memory card to its memory card slot.

SSD stands for Solid State Drive. It is also sometimes called a solid-state device or a solid-state disk. SSD is a solid-state storage device which employs integrated circuit as storage to permanently store data. Compared with other storage types, SSD enjoys the best performance and highest price instead. In addition, SSD is more able to withstand physical impacts.

Both eMMC and SSD operated on the NAND principles, where the data is transferred through NAND gates. eMMC typically has only one NAND gate, while SSD tends to have more. Think of NAND gates as highways that allow the flow for traffic. If a city has only one highway in and out, it probably will be congested at all times, making the traffic move slowly. However, if there are more highways then the traffic gets distributed between them, allowing the cars, i.e. data to move faster.

This is what happens between eMMC and SSD. Typically, SSD has a much faster read-write speed as compared to eMMC. The top speed of SSD is about 1500 MB/s, whereas for eMMC the top speed is just 400 MB/s. However, this does of course vary with the model and type. Hence, eMMC and SSD are mostly comparable in their increased durability and energy efficiency, but not in performance.

They also differ in the amount of storage space each one provides. eMMC offers much less onboard storage than SSD. Typically, eMMC is offered in 32GB and 64GB variants, though other sizes are available, such as 128GB. SSD, on the other hand, typically comes in 128GB, 256GB, 320GB, and 512GB variants. Hence, to combat this, eMMCs are often paired with cloud storage, i.e. files are stored on a remote server, whereas SSD doesn’t need to be, but can be if the user needs extra storage.

Should You Avoid eMMC Storage?

Cheaper, smaller eMMC storage isn’t necessarily bad. There’s definitely a market for it, especially in the budget laptop category with devices like Microsoft’s Surface Laptop Go. As far as durability goes, you’ll no doubt see a display or touchpad crap out way before eMMC storage degrades to an unusable condition.

Whether or not you should avoid eMMC storage is more based on your budget and what you’re using your device for. If you need a tablet or affordable notebook for browsing the internet and watching some streaming media, eMMC storage should be just fine. Keep in mind that eMMC storage is not all made the same, and you’ll no doubt want to check reviews for speed benchmarks before making a final decision.