What is MU-MIMO and Why do You Need it on Your Router? 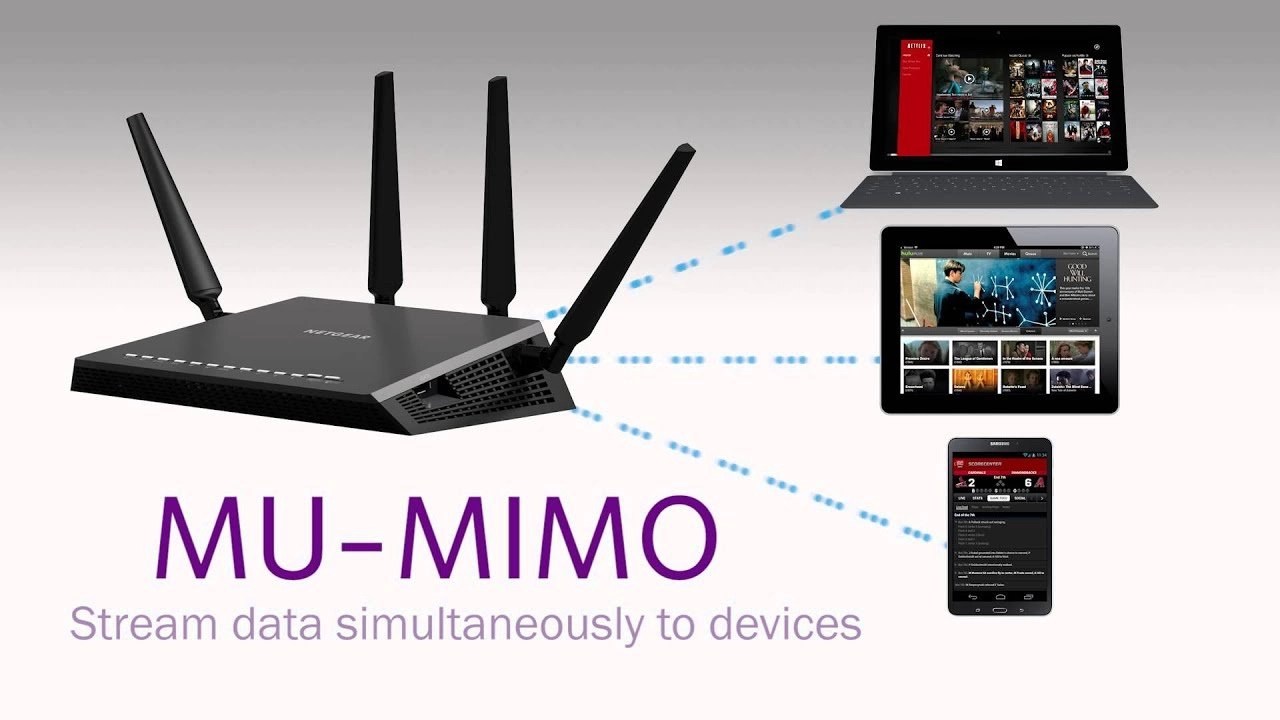 The more gadgets that connect to your home Wi-Fi, the slower it moves. That’s because most routers can only communicate with one device at a time. This article explains what MU-MIMO is and why you need it on your Router.

With these single-user (SU-MIMO) routers, each device waits its turn to send and receive data from the Internet. This means when a new device connects, the line—and the wait—becomes a little longer. Luckily, there’s a new technology standard in town that drastically reduces wait time, and its name is MU-MIMO.

With these routers, only one device can receive data at any given time. This means that if you have one person watching Netflix and another watching YouTube if you were to start both those streams at the same time, one device would get priority while the other had to wait until the first had buffered a few bits of data for itself.

Usually, you won’t notice a slowdown. Even though SU-MIMO routers can only open up one stream at a time, they do so in very rapid succession, which to the naked eye looks like a solid stream of data.

To borrow an analogy, think of it like a Pez dispenser strapped to a carousel: everyone standing around the circle is eventually going to get a piece of candy, but the carousel still needs to make one full rotation before all the members of the network are satisfied.

“MU-MIMO” routers, on the other hand (“Multiple User, Multiple-Input, Multiple-Output”) can break up this bandwidth into separate, individual streams that each share the connection evenly, no matter the application.

MU-MIMO routers come in three flavors: 2×2, 3×3, and 4×4, which refers to the number of streams that they can create for each device in your household. This way, the MU-MIMO carousel can simultaneously send Pez flying in four directions at once. Without getting too technical, this is like each device getting its own “private” router, up to four total in 4×4 MU-MIMO loadouts.

The main benefit here is that instead of each stream being periodically (albeit very, very briefly) interrupted by the time it takes for the carousel to spin around once, a MU-MIMO router can keep its signal constant for those four devices, and fairly distribute the bandwidth to each without compromising the speed of any of the others at the same time.

Do I Need it on My Router?

If you have four or fewer MU-MIMO compatible devices connecting simultaneously from opposite ends of the house, then a MU-MIMO router could be a good pick for you.

For example, if you’ve got a hardcore gamer in one room sharing a connection with someone else who’s trying to watch a 4K Netflix stream in another, MU-MIMO could be worth it in the long run. Of course, this would only make sense if both the streaming device and the laptop can decode a MU-MIMO signal at all.

However, if you’re still on DSL and don’t even have that much bandwidth to go around in the first place, no router (MU-MIMO or otherwise) will be able to increase the base download/upload speeds you get from your ISP.

MU-MIMO is simply a bandwidth management tool, one that only works within the parameters of the speed you’re already getting from the jack coming out of the wall.

For the time being, MU-MIMO will probably be reserved for packed households with devices that demand a lot of individual bandwidth and do so in separate rooms. Otherwise, the increased cost of the newer technology will be prohibitive for the standard buyer until these types of usage patterns become more common and router manufacturers can bring the price down.

There may not be many devices that can take advantage of it just yet, but that doesn’t mean MU-MIMO routers aren’t worth a look. No, they don’t really solve any problems for today’s web users, and there’s still no indication that the MU-MIMO protocol will see widespread adoption in mainstream devices anytime before 2017.

But for anyone who can take advantage of it (like the three people who bought a Lumia 950), it’s still a solid feature that could potentially future-proof your household for the bandwidth needs of tomorrow.

This decreases the time each device has to wait for a signal and dramatically speeds up your network. Considering that the average household has upwards of eight devices battling for bandwidth simultaneously, MU-MIMO will increasingly improve your WiFi experience.

For home WiFi users, annoyances such as choppy video and continual buffering can put a damper on the fun, but anyone who uses a WiFi network will benefit from the performance improvements of MU-MIMO. Here are some of the ways MU-MIMO kicks common WiFi problems to the curb:

Both MU-MIMO and non-MU-MIMO (SU-MIMO) devices operate faster because all devices on the network have less time to wait to get data from the WiFi router.MU-MIMO technology increases the capacity and efficiency of your router, allowing it to handle more WiFi-intensive activities such as streaming and gaming.

All this sounds great, right? It is, but as with most network-related features, there’s one big drawback: for MU-MIMO to work, both the router and the receiving device need to have full MU-MIMO compatibility to communicate with one another.

Currently, MU-MIMO routers are only able to broadcast over the newer 802.11ac wireless protocol, a signal that many devices haven’t been updated to decode just yet.

Even fewer devices have MU-MIMO. As of this writing, there are a only few laptops that have MU-MIMO-ready wireless receivers, and a select number of smartphones and tablets that come with a Wi-Fi chip that knows what to do with a MU-MIMO stream (like the Microsoft Lumia 950).

That means that even if you drop the extra coin on a router with MU-MIMO capability (usually about $50 more, depending on the model), it will likely be several years before every device in your home can use the feature as intended.

Yes, you can buy a compatible MU-MIMO wireless USB dongle for desktops or laptops, but they’re quite a bit more expensive than regular SU-MIMO receivers, which could prevent some users from taking the plunge.

Also, there’s the issue of maxing out your available streams. Right now MU-MIMO tops out at four streams, which means that if you add a fifth device to the network, it will have to share a stream with another device in the same way a SU-MIMO router would, which sort of defeats the purpose.

Lastly, there’s the fact that MU-MIMO broadcast signals work on a directional basis, and can only be split up when devices are in different locations around the house. For example: if you’re streaming a movie to the living room on the TV and your kids are connecting their Nintendo 3DS on the couch only a few feet away, by default both devices will be forced to share the same stream.

Because of the way that MU-MIMO streams work, there’s currently no workaround for this, which means if you live in a small apartment or do most of your browsing from the same room, MU-MIMO won’t provide any extra benefits over SU-MIMO.

To use MU-MIMO, you must first have a router that supports the technology. WiFi Routers operating on older standards such as Wireless-A, B, G, and N do not support MU-MIMO, and it’s only a feature in some of the later Wireless-AC routers. Your safest bet is to look for a router that explicitly states it supports MU-MIMO, Next-Gen AC, or AC Wave 2.

What Devices Work With MU-MIMO Routers?

Any wireless device will work with a MU-MIMO router, but to get the most WiFi performance improvement, the device should also support MU-MIMO technology.

Based on exhibits at the Consumer Electronics Show (CES) and Computex, it’s expected that manufacturers of computers, laptops, smartphones, and tablets will increasingly support MU-MIMO in the coming years. According to DigitalTrends.com, the technology should be a standard feature in most devices by 2017.

How MU-MIMO Works With Wireless Devices

MU-MIMO was created to support environments where multiple users are trying to access the wireless network at the same time. The nature of the 802.11 protocol is that users are served on a first-come, first-serve basis.

When multiple users begin accessing the router at or near the same time, congestion can be introduced as the router services the first user’s request while the second (and third, fourth, etc.) wait.

While these times can be minuscule, it can add up with more devices (smartphones, tablets, computers, etc.) and users asking for resources. MU-MIMO helps this by allowing multiple users to access router functions without congestion.

Also read: How to Fix it When Netgear Router is not Connecting to the Internet

MU-MIMO technology breaks up the available bandwidth into separate, individual streams that share the connection equally. A MU-MIMO router can come in 2×2, 3×3 or 4×4 variations, which refer to the number of streams (two, three or four) that are created by the router (there’s also talk of 8×8 coming in 2018).

In simple terms, imagine you’re in line at the school cafeteria – you get served after the people in front of you get their sloppy joes. With MU-MIMO, instead of one lunch lady, you now get two, three or four lunch ladies, which lessens the time you need to wait.

However, there are some rules regarding this. First, the streams are spatial, which means if two devices are close to each other, they still have to share the same stream.

Imagine that cafeteria scenario again, but this time the four lines that were created are now points on a compass. If you’re physically located in the south line, you have to wait with everyone else unless you move to the east, north or west.

In an office setting, if your adjacent coworker is streaming a video conference while you’re trying to download a super-large sales presentation, you’ll have to wait, unless you move to the other side of the office. This scenario assumes that the router/access point has enabled MU-MIMO and beamforming support.

Second, the technology only works for downlink connections. This is great for home users who will likely need faster speeds for 4K video streams and online gaming, but less useful for business workers who need faster uploads for content creation (such as video uploading) or two-way video conferencing applications.

Don’t miss: Explaining What Wireless HDMI Is And Why You Need It

Bidirectional MU-MIMO on the Horizon

In addition to supporting 8×8 arrays, the coming-soon 802.11ax standard addresses the uplink portion of MU-MIMO, giving uploaders a better experience.

Initial 802.11ax products are expected to appear in 2018, although the standard won’t be finished until early 2019. The standard is also designed for dense environments such as airports, stadiums and urban apartment buildings.

So, the future is bright for MU-MIMO as it expands its capabilities and more devices become able to utilize the benefits. Let’s just hope we don’t need to add any more letters to this already large-enough acronym.

The Future of MU-MIMO Networking

Though MU-MIMO is still an emerging technology, forward-thinking companies like Qualcomm and Linksys have anticipated its future demand.

With the introduction of Qualcomm’s Wave 2 MU-MIMO WiFi® chip and Linksys Max-Stream EA8500 (the first MU-MIMO-capable router) , this faster networking solution has taken its first step toward becoming the standard. Both companies are promoting the early adoption of MU-MIMO by offering the technology in a variety of products: routers, range extenders, and USB client adapters, with more to come as the technology, is popularized.

Given its superiority over existing network standards, it likely won’t be long before MU-MIMO becomes the norm.