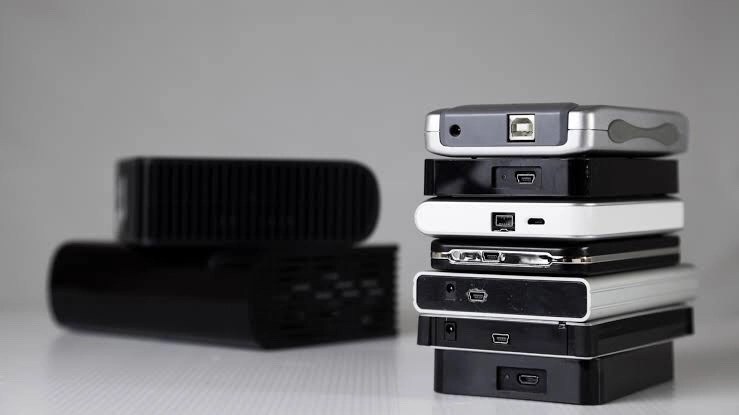 Even though some people have been lucky enough to pick up a PS5, and many more folks are chasing every potential PS5 stock drop right now, the PS4 is still a very relevant console, and its library is bigger than ever.

By simply plugging in an external hard drive into the PlayStation 4, you get extra space to store games. It can also store videos and images you capture and record while playing games (which can quickly fill up the PS4’s built-in storage) and store other media.

Given this dual-generation, the hybrid status we find ourselves in, the need for extra storage is greater than ever. Therefore we have even more reason to lean on a PS4 external hard drive to carry the weight of our games.

This article will list the best PlayStation 4 external hard drive you can buy to expand your console’s storage capacity. Let’s get started.

The My Passport drive from Western Digital is one of the most reliable, convenient, and versatile HDDs. Anyone looking for a standard, reasonably priced PS4 external hard drive will be fine with this. It’s USB 3.0 compatible and only requires a quick reformat the first time you use it.

WD My Passport 4TB Portable Hard Drive is small and sturdy, about the size of a larger smartphone like the iPhone X or the Galaxy S9 Plus. The My Passport series is even styled to look a little like the PS4 console itself, so you should be able to slot it right into your setup. The new aesthetic is arguably even more pleasing and brings further style to a quality HDD.

We’d go for the 4TB version for several reasons. Right now, you see the most significant savings on the 4TB, and you tend to get better value with the bigger the storage capacity. With 4TB, you’ve easily got space for 50+ AAA games and loads more indies and smaller downloads from the PS Store. Essentially, this HDD will last you for about 2-3 years before you ever need to manage your storage, and that’s with heavy use and loads of games installed on it. Definitely the best PS4 external hard drive today.

If you want the best all-round external hard drive for the PS4, the Seagate Game Drive for PS4 is the one to get. It’s officially licensed for the PS4, which means it’s been built especially for use with the console.

This means you can be sure that it’s been optimized to work perfectly with the console, and you won’t have to worry about any incompatibility issues – plug it in, and it’s good to go!

You’ve got the choice of 2TB and 4TB capacities, both providing a massive amount of space for your games and media. It’s also just 12mm thick, so you can tuck it unobtrusively behind the console. With the PS4 branding, it also fits in nicely with the console. Also, it comes in designs that compliment some of the PS4’s best games, such as The Last of Us Part II.

The Samsung T5 remains one of the best SSD drives you can get, and if you’re looking for slightly superior performance over the WD My Passport SSD, consider getting the Samsung SSD T5 500GB. However, it comes at a slightly higher price, so you constantly have to weigh that against what you get. Nevertheless, both read and write speeds come out marginally quicker with the T5.

There’s no doubt the Samsung looks the part, and it’s both compact and durable, making it ideal if you’re carrying PS4 games and files between locations. However, because the performance isn’t hugely different from the WD, it’s probably not worth getting the Samsung if you’re using it as extended storage and not taking it with you. We’ve included the Samsung T5 here because, technically, it offers the best performance of all the PS4 hard drives we’ve tested. Still, because it doesn’t offer the same value for money as other SSDs or the regular HDDs, it’s tough to recommend unless you find a sweet deal and get serious money off.

The Toshiba Canvio Basics is an excellent example of how you don’t need to spend a huge amount on upgrading your PS4’s storage. It’s cheaper than many of the other drives on this list and comes in a range of capacities, from 1TB to 4TB, which means you can pick one that best suits your needs and budget.

If you’re not sure how much space you’ll need, we generally recommend 2TB. That will give you plenty of storage space, even if you have a vast game library, without being overkill.

The Toshiba Canvio Basics budget design does mean that it feels a little cheap. There’s no classy metal shell like on some external hard drives here, which means it also doesn’t feel as robust. However, if you’re tucking it behind the PS4 and not moving it around that much, then it doesn’t matter.

The Toshiba Canvio Basics is not the fastest drive either, but fast enough to run games off, especially considering the low price.

The WD BLACK P50 SSD is pretty much the complete package. And what a robust package it is. Starting from the top, the P50 is a rectangular-shaped drive about the size of a small smartphone. It’s still handheld, though, so it’s incredibly portable while also staying firmly away from the ‘so small I might lose it’ territory. The case is a very cool-looking military style with molded metal and the traditional sleek WD_Black aesthetic and marking.

It comes with a USB-C port into the drive, but this can be implemented as a USB-A or USB-C connection, depending on what device you’re using it. There’s a small but clear LED indicator on one of the short ends, which is always a help, but one minor downside is it does get a little warm when in use, so it’ll pay to keep that in mind when positioning it.

What you’re told you’re getting and what happens is pretty much bang on when it comes to speeds. Its incredible performance for an external SSD and the stated speeds of ‘up to 2000MB/s’ was on the money in our testing. Real-world performance-wise, the P50 gives you everything a high-quality external SSD should do: games were loaded incredibly quickly, we retrieved files in the snap of a finger and remarkably consistent performance levels. It’s a surefire SSD that will rapidly improve your gaming experience by reducing the time looking at loading screens and increasing the time when you’re playing.

While you will pay for the performance and privilege of using the P50, it justifies the investment and will not let you down. The WD_Black P50 Game Drive is right up there when it comes to the best PS4 external hard drives.

Increase your storage again with this ridiculously well-priced 6TB offering from Seagate. It’s slick, slim, and you can get versions from 2TB upwards – although this 6TB model represents the best value for money. It’s a simple plug-and-play setup on two counts: mains power; and USB 3.0. The latter is excellent for transferring at breakneck speed. The price is kept low because this is a standard HDD, so read speeds won’t be as fast as the SSD hard drives like the Samsung. If you get a 6TB drive… that’ll probably store between 80-100 PS4 games, so you’ll never need to worry about space again.

Here’s another external hard drive from WD, but unlike the WD My Passport, the WD Black P10 Game Drive is designed for gaming from the ground up. This means that it offers excellent performance that’s been tuned to running games off it, but it’s also got an eye-catching metal design, which will attract a lot of gamers.

The WD Black P10 Game Drive is impressively small, so you can easily place it by your PS4 or even carry it around with you if you want to take your games and files to another location, and with capacities ranging from 2TB to 5TB, you have plenty of choices.

However, this is an expensive external hard drive, and there are better value options on this list. The fact that there’s no 1TB option also means if your storage needs are relatively modest, you may end up having to spend extra on the larger 2TB option and so have paid for storage you don’t need.

But, if you can afford this drive, you’ll be pleased with its performance.

While the world is moving slowly but surely to SSDs, becoming the go-to for PS4 external hard drives. Still, they can be pricey units; an HDD will still offer way better GB to $/£ value. However, there are chinks forming in the prices of SSDs, and the Crucial X6 offers a quality, slightly cheaper offering while still giving you that excellent performance and decent capacity. The fact that you can get a 1TB X6 for a similar price of SSDs with less than half of the storage demonstrates this.

The Crucial X6 is fantastic for storing and playing PS4 games and will ensure you have the speediest of file transfers, loads, and games at your fingertips. A big benefit is getting a PS4 external hard drive that’s likely faster than your PS4’s internal one, and this will also be a drive that will go incredibly well with the new-gen PS5 console when and if folks upgrade.

The drive’s USB-C connection means you’ll have to use the adapter that comes with it to plug into your PS4, but you’ll have to be aware of the short cable that might force it into some weird positions. If you like the look of this one but want an even faster version, you’ll want to take a look at the Crucial X8.

This is a great value option for those looking for a tough-as-nails hard drive with decent and reliable transfer rates and speeds, robust design, and a do-it-all feel to their external hard drive.

It’s a solid unit with a fair bit of weight, making it feel like it could survive a drop or two or bump around the house. There’s a big emphasis on robustness here, with the drive being shockproof, water-resistant, and anti-scratch protected. Plus, a rubber bumper around the outside helps with grip when on the go and adds a bit more protection to the drive. The rubber pulls away at some parts (safely) to act as a holder for the USB cable when on the go, and there’s a USB port cover which is a nice touch for storage.

As well as using it solely as a PS4 external hard drive, we used this to back up a load of files onto a PC. And it was straightforward to set up and use, and the transfer speeds were very quick; transferring more than 1.5GB of data didn’t take any time. So this represents an all-round solid acquisition in the hard drive department.