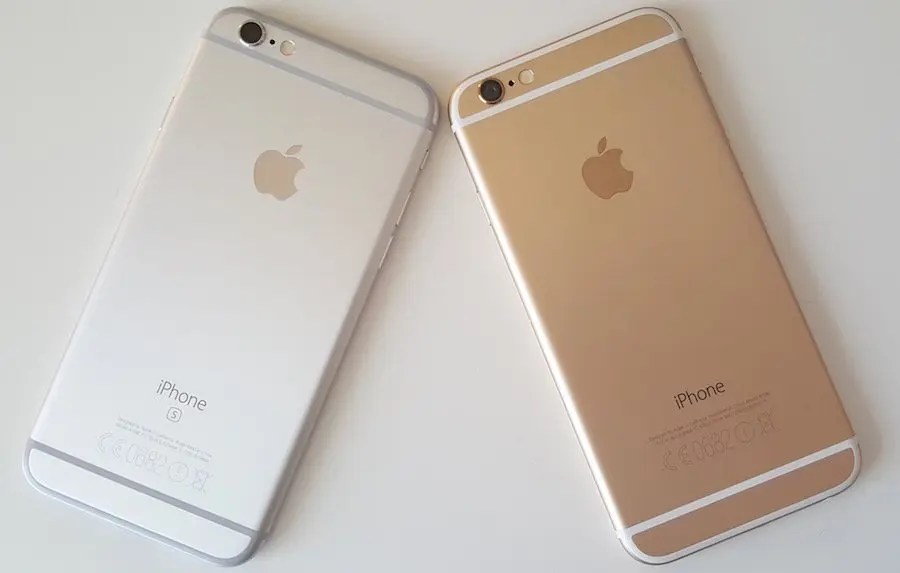 At first glance, iPhone 6 and iPhone 6s look almost identical. In fact, if you were to put each model side-by-side, there’s a good chance you wouldn’t be able to tell which is which.

Aside from the “S” logo on the back of the iPhone 6s, there are very minimal differences between the 6 and 6s on the outside. Under the surface is where most of the improvements are.

Let’s take a look at some of the features that distinguish the two models, and you can see for yourself if there’s enough of a difference to call it a dealbreaker.

As stated earlier, you might think that the iPhone 6 and iPhone 6s are the same phones, but actually, there are a number of design differences between the two handsets.

Below are a few major features that mark the difference between iPhone 6 and iPhone 6s are:

Let’s dive in for more detail.

First of all the iPhone 6s introduced a new color option called Rose Gold. Otherwise, both handsets are available in Gold, Silver and Space Grey.

The iPhone 6s is also made out of a more durable Series 7000 aluminum. This is presumably to prevent a repeat of the Bendgate debacle that happened when some iPhone 6 Plus owners found that their iPhones had bent after prolonged periods of time spent in their pocket.

Aside from that, the design and build of the iPhone 6 and iPhone 6s are essentially the same. There is a tiny increase in height, width, depth, and weight for the 6s, but you’re unlikely to notice.

The big difference is the inclusion of 3D Touch on the 6s models. 3D Touch means that the display on the iPhone 6s can distinguish between a tap, a light press, and a hard press, and that opens up a whole host of new navigation, interaction, and gesture possibilities. There is haptic feedback (a gentle buzz) so you know you have trigged the hard press functions.

Apple has always touted improved Camera specs with each new model of iPhone. And there was nothing different about the release of the iPhone 6s. In iPhone 6, the rear-facing camera was 8 megapixels and was able to record videos at a resolution of 1080p. And with the iPhone 6s, the rear-facing camera was boosted to 12 megapixels and was now able to film 4K videos.

Inside the iPhone 6s is the A9 64-bit processor and M9 motion coprocessor. At the time Apple said the iPhone 6s’s processor was 70 percent faster and had 90 percent better graphics performance than the A8 and M8 chipset used in the iPhone 6.

Modern iPhones are considerably faster of course, but this does demonstrate that there was s significant difference between the 6 and 6s.

Connectivity for both handsets is the same – they all offer 4G LTE Advanced, 802.11ac WiFi, Bluetooth 4.2, and NFC.

While the displays on both iPhone 6 and iPhone 6s look virtually the same and have the same resolution, another key difference between the two models lies in the iPhone 6s’ screen. It was with the 6s release that Apple introduced the new feature, 3D Touch. It’s a new way to interact with your phone by applying pressure to the screen instead of simply tapping. With 3D Touch, you get previews by pressing on links or notifications and open entirely new app menus with a full click-through.

Finally, battery life is estimated to be the same on all these handsets at up to 10 hours of internet browsing or 11 hours of video playback.

If you’re wondering whether your phone is an iPhone 6 or 6s, the easiest way to tell is to look at the back of the phone and see if it has the “S” logo at the bottom of the casing. If you don’t see it, then you’re probably using an iPhone 6.

If for some reason you’re still unsure which model of iPhone you have, you can always check in Settings > General > About > Model Name.

When you compare the iPhone 6 and 6s side by side, the differences are minimal in contrast to other models. Hopefully, this article has sorted them out for you. At the end of the day, if you’re looking for a phone that will take better pictures, run faster, and has a few extra features, then the iPhone 6s should be your phone of choice. Happy shopping!