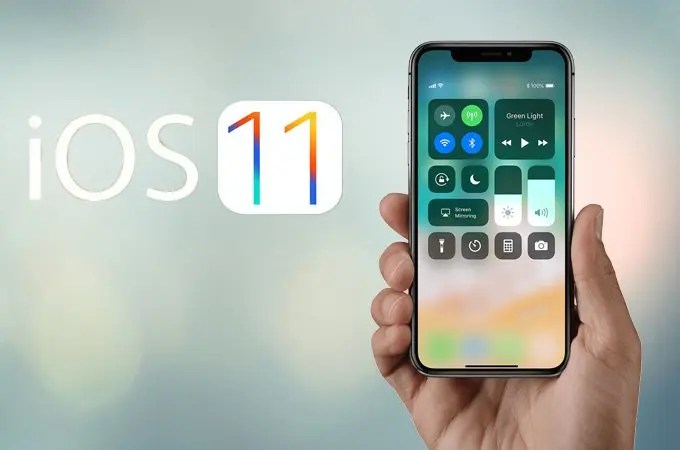 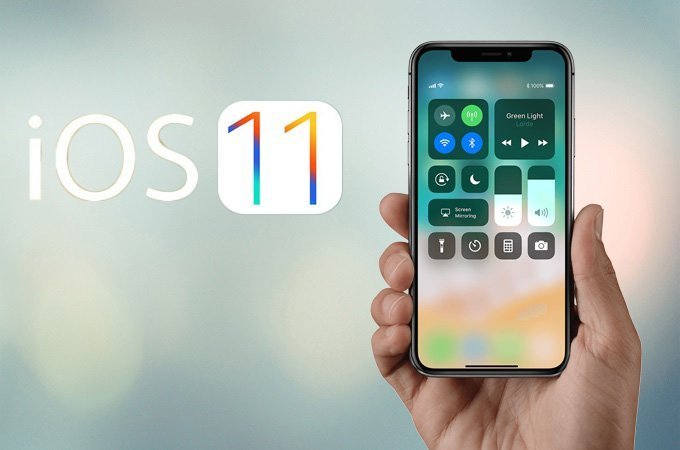 Apple introduced the iOS 11 in June, 2017 at the Worldwide Developers Conference. As Apple CEO Tim Cook said on stage at WWDC, the update takes the best and most advanced operating system and turns it up to 11.

Rumors suggested iOS 11 would see design changes. We didn’t get a complete overhaul to the design language, but there are indeed subtle design updates throughout the operating system. 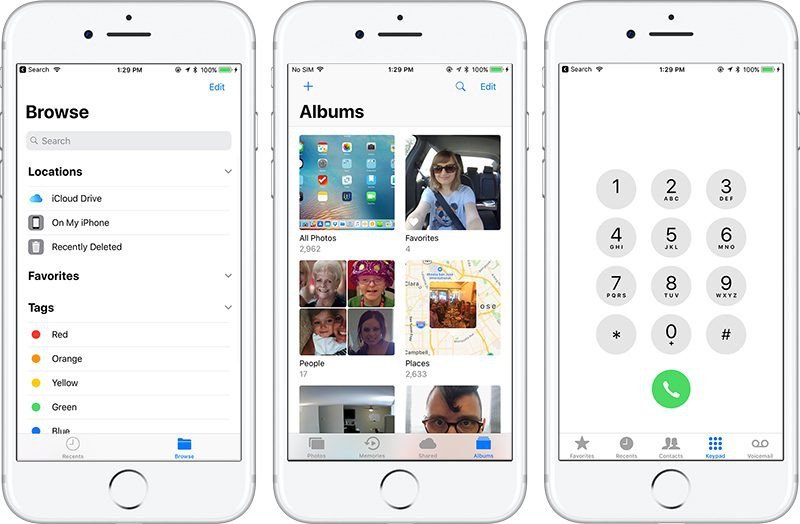 Many built-in apps have been refined with darker lines and bolder fonts, with Apple moving away from the thin fonts that have dominated since iOS 7.

Important UI elements like the Control Center and the Lock screen have seen the most significant updates.

In iOS 10, Apple split the Control Center, accessed by swiping upwards from the bottom of the display, into multiple windows. In iOS 11, it’s back to a single consolidated window and it has an entirely new look with bubble-style icons. There are two top sections for basic networking options and Apple Music controls, plus sliders for volume and brightness. 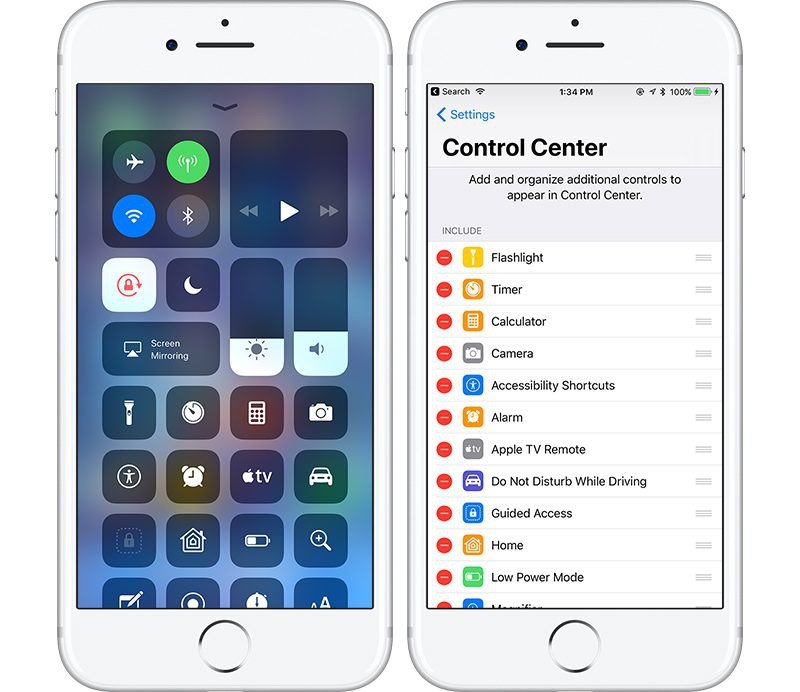 Instead of taking up just the bottom half of the display when brought up, Control Center now takes over the entire iPhone screen. Because the Control Center is no longer restricted to half the display, it can offer access to a wider range of functions, which can be customized.

Control Center also has expanded 3D Touch access. A 3D Touch on one of the icons brings up additional options.

3D Touch options are available for all of the Control Center settings that are more complex than just a simple toggle on/off button.

Siri has been updated with more realistic male and female voices that are designed to more closely mimic natural human speech. Apple says Siri’s new voice options are powered by deep learning for better pronunciation and a more expressive voice.

In iOS 11, Siri is using on-device learning to understand more about your preferences, allowing the personal assistant to learn more about your interests to better anticipate what you might need next. 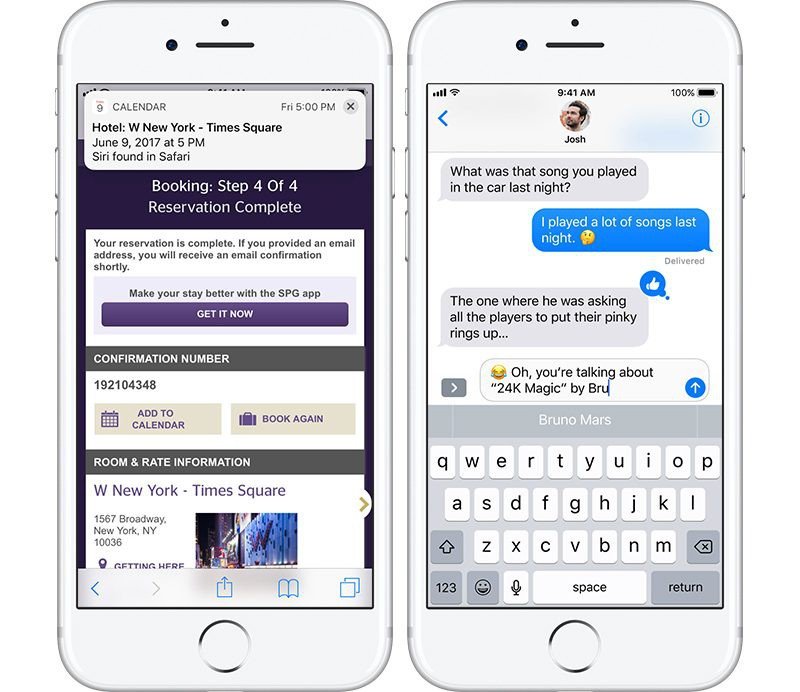 When using Siri, you might notice a new icon at the bottom of the display in iOS 11, and you can now ask Siri to translate English to Chinese, French, German, Italian, and Spanish. Apple plans to expand translation languages over the coming months.

iOS 11 does not feature iCloud Drive app, because it’s been expanded into a more comprehensive “Files” app that’s designed to mimic the Finder app on the Mac. 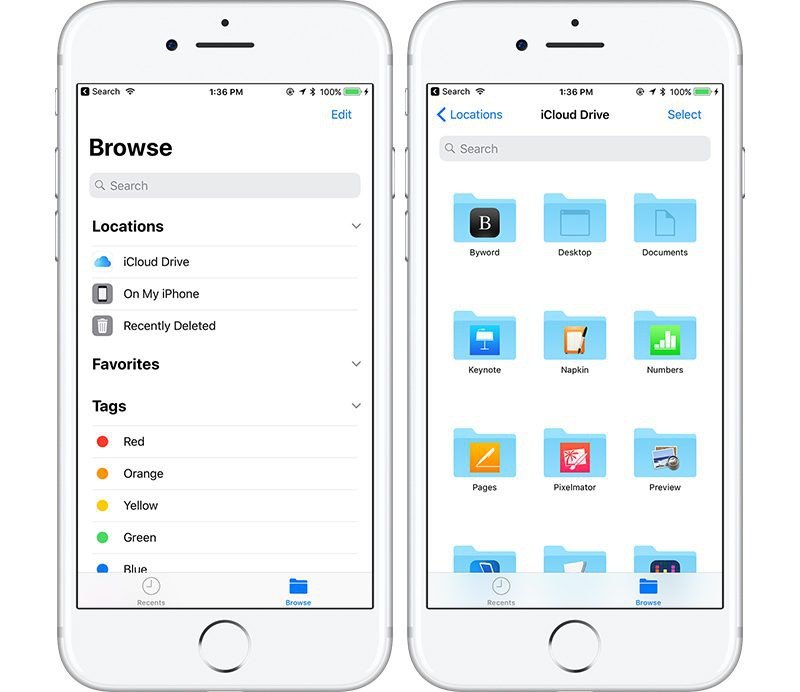 Files is well-organized and offers up quick access to all content that’s stored on an iOS device. Like Finder for Mac, it’s searchable, has a section for viewing all recently accessed files, and it supports tags, spring-loading, nested folders, and favorites.

For iPad Pro models, Apple Pencil support has been expanded with new features and functionality that allows it to work anywhere in the operating system, similar to a standard stylus or a finger. In previous versions of iOS, the Apple Pencil could only be used within certain apps, but there is system-wide support in iOS 11.

In iOS 11, there’s a new App Drawer located below the text entry in Messages that’s designed to make it easier to access apps and stickers. 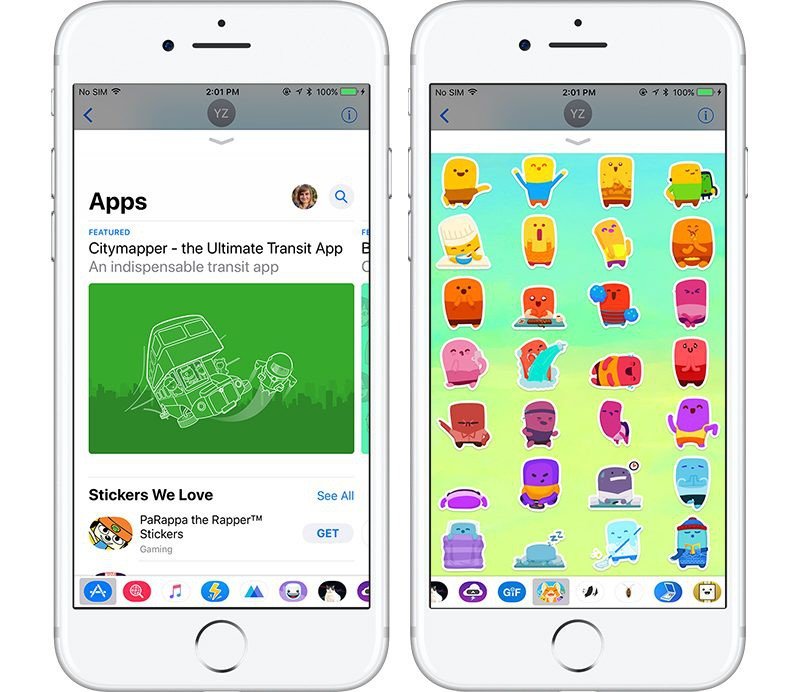 Along with the App Drawer, Messages is the home of a major new Apple Pay feature — peer-to-peer payments. Using an Apple Pay Messages app, you can now send and receive money using Apple Pay and a connected debit or credit card, similar to Square Cash. 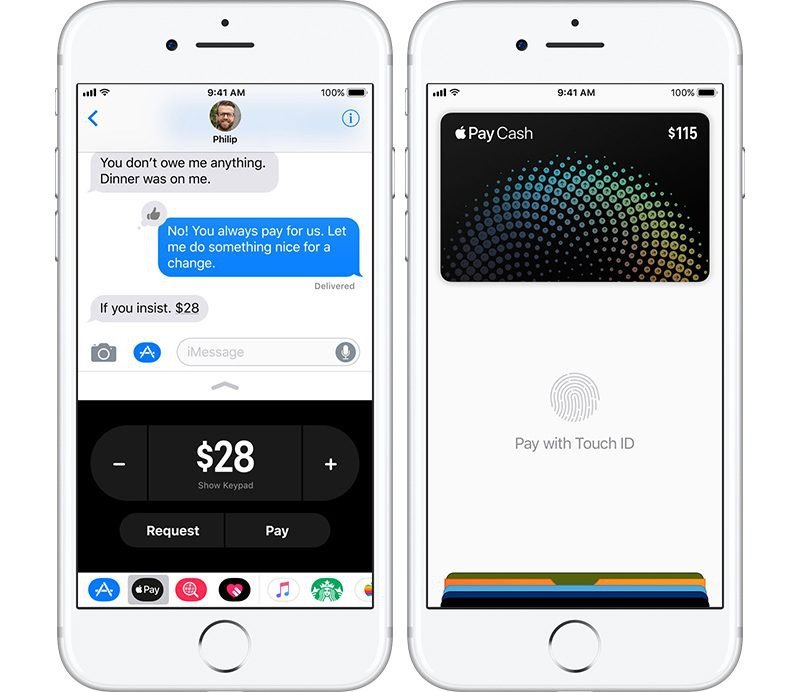 Apple has purchased several indoor mapping companies, and in iOS 11, it’s making use of that technology. iOS 11 supports indoor maps of select malls and airports around the world, displaying full layouts of each location with icons for restaurants, bathrooms, and other notable indoor landmarks. 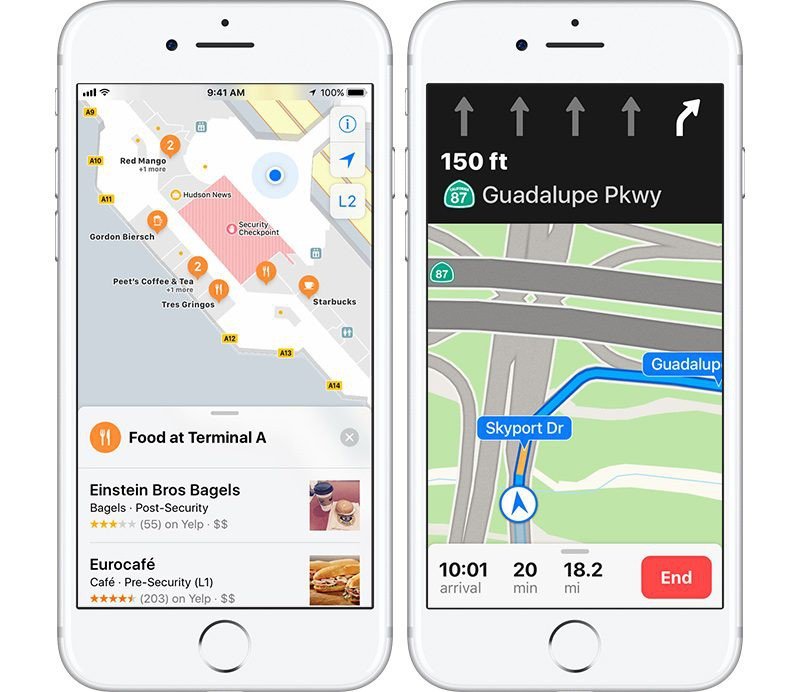 Indoor mapping technology is limited to a handful of malls and airports at launch, but Apple says support will be dramatically expanded over time.

Maps is gaining lane guidance, which is designed to help you avoid missing a sudden turn or an exit by telling you which lane to be in, and it will now display the speed limit of the road that you’re on.

The “Connect” feature in Apple Music that required you to make a Connect account back when the service first debuted is finally being put to use beyond following artists. In iOS 11, you can make an Apple Music profile that allows you to share playlists with friends and see your friends’ playlists.

Your profile lives in the “For You” section of Apple Music, and when you tap it, you can see the profiles of the friends that you follow. From there, you can see what they’ve been listening to. Profiles can be set to public or private, as with any social network.

Internally, the way photos and videos are stored is being updated, which means images and videos are going to take up less space on iPhones and iPads. For video, Apple is implementing HEVC or H.265 video encoding, which results in 2x better compression. The JPEG image format is also being changed to HEIF (High Efficiency Image Format), which also allows for photos that are half the size.

Photos and videos will also take up less storage space in iCloud, and though there are new storage formats, photos and videos sent from iOS devices remain compatible with other devices so you can still share content with your friends. These new formats are available on Apple’s latest devices, those with an A9 chip or later.

Facial recognition in Photos, which was previously exclusive to each iOS or Mac device, will now sync with all of your devices. That means you only have to tell Photos who each person is once, and it’ll sync that info across Macs, iPhones, and iPads.

Photos is taking advantage of better machine learning techniques to surface new kinds of Memories. In iOS 11, you’ll see Memories of pets, activities, and children growing up, among other new montages.

When editing a photo, there are several new filter options available, like Vivid, Vivid Warm, Vivid Cool, Silvertone, Dramatic, and more. Many older filters have been replaced with the new options. Photos also includes better support for GIFs.

In Photos, there’s also a new custom Share Sheet option that’s designed to make it much easier to turn a photograph into a watch face for an accompanying Apple Watch. 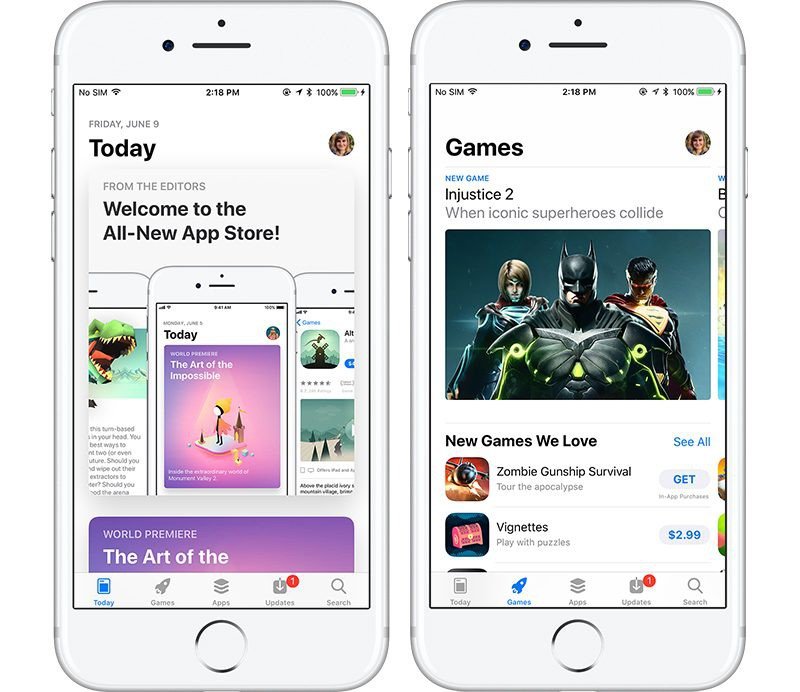 The App Store looks entirely different in iOS 11 because it’s been completely overhauled. Games and Apps are split out into their own individual sections and there’s a new “Today” section that’s designed to surface new app content on a daily basis.

Today features an App of the Day and a Game of the Day, along with editor’s choice app selections, interviews with developers, app tutorials, and more. Individual app pages have also been redesigned, with more of a focus on reviews and video overviews.

Safari has a new feature that’s designed to prevent websites from tracking you across multiple sites for the purposes of delivering ads. It’s not going to cut down on the ads that you see, but it will make it harder for advertisers to gather data about what you’ve been browsing.

In iOS 11, data collected in the Health app can be uploaded to iCloud, making it accessible across multiple devices and ensuring your data is safely backed up. Uploading Health data to iCloud is optional, and it’s turned off by default.

The Home app, and HomeKit, are gaining support for speakers. HomeKit-compatible speakers, like Apple’s HomePod, will be able to interface with HomeKit, allowing the Home app to be used to configure and control them.

Do Not Disturb has been expanded with a new “Do Not Disturb While Driving” feature that mutes all incoming notifications on an iPhone when it’s connected to a car’s Bluetooth or WiFi. The feature is meant to cut down on distracted driving.

Do Not Disturb While Driving not only mutes notifications but also responds to any incoming messages with a quick note letting people know you’re in the car. It will, however, let through emergency texts, and it can be disabled if you’re a passenger in a car.

iOS 11 was released to the public on Tuesday, September 19 following a beta testing period that spanned from June to September. iOS 11 is followed by iOS 12, set to be released in September 2018.