8 Proven Ways: How To Screenshot On Snapchat Without Them Knowing 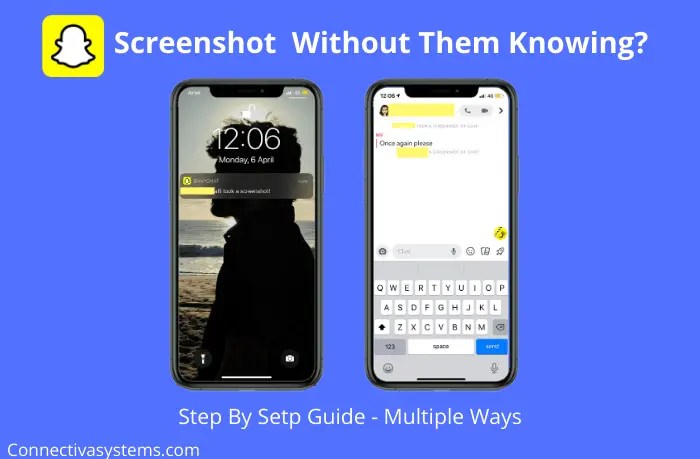 How to Screenshot on Snapchat without them knowing – We all know how popular and important the photo-sharing app Snapchat has become in our lives. Snapchat is one such platform that has successfully kept our secrets since its launch. You message any snaps, memories, or photos; they get removed right after opening. And this privacy feature is being loved by millions of users worldwide.

The app sends a notification to the user whose screenshot has been taken when it comes to screenshots. Because of this anti-screenshot feature, people are quite baffled and look for different ways to screenshot on Snapchat without them knowing in 2022.

Thankfully, some methods make it possible & let you take a sneak peek into someone’s Snapchat secretly without notifying them.

How To Screenshot On Snapchat Without Notifying Them 2022 (Android/iOS)

There are a few tricks that you can consider separately on iPhone and Android to take a screenshot on Snapchat secretly.

If you are desperate to capture & save someone else’s Snapchat story, use another device to take a picture of a particular snap before it self-destructs. The quality won’t be surprising, but it depends on how you keep your hands steady to capture a decent shot.

In this method, you cannot only capture the screenshot on Snapchat without them knowing but can also record the story videos without notifying them. Of course, if your smartphone offers a built-in Screen Capture tool, you can use it the usual way to capture a Snapchat story. You can even download third-party Screen Capturing Apps for Android or iPhone to take screenshots of Snapchat stories.

This trick is similar to WhatsApp Status Savers, several exciting apps in the market that lets users take screenshots of Snapchat stories without them knowing. Try installing SnapSaver on your device & follow the instructions step by step:

This method is easy and doesn’t require you to do a lot. However, here are the steps you have to follow:

Just open the snap you want to take a screenshot of, take a screenshot, and it is done. After 30 seconds or a minute, turn on your internet connection, and no one will know what you just did.

Although this method won’t help you capture the story in full size, you can still keep some part of the Snap. This method is perfect for keeping the chat messages in the form of screenshots. Using this method, you can undoubtedly ditch the notification “_ took a screenshot of chat” using this method. Just follow the hack step by step to screenshot on Snapchat without them knowing.

Open the chat on Snapchat, of which you would like to take a screenshot.Now press the recent app button, where all the recently used apps get displayed. Screenshot the chat quickly & close the apps.

This is another Snapchat screenshot hack that requires some work. First, you have to use the screen mirroring feature (which can be accessed from your smartphone’s Settings) to cast your device on an external device such as a smart TV.

Once this is done, you will have to open up your Snapchat and use another device to record the Snapchat video or photo. After a couple of edits, you will get yourself someone else’s Snapchat Story, and they won’t even know about it.

This would work for Android users only. However, many users command Google Assistant to clear the cache, and taking a screenshot later can help take shots.

After opening the chat, say “OK, Google” and “Take a screenshot.” Later, you can save this screenshot on your phone or share it with other apps. Unfortunately, Snapchat cannot detect this way of capturing a screenshot, and no alert message would be sent.

It would be best if you were very quick at performing this trick; otherwise, the concerned person will instantly know that you’ve secretly screenshotted their Snapchat story. Just follow the hack step by step:

The person whose story has been screenshotted would not receive a pop-up notification that someone has taken a screenshot & no screenshot indicator (a double-arrow icon) will be displayed for a few minutes. But once you see their next Snap, a ‘screenshot message’ will appear in their chat. So, if the person you screenshot is super unobservant, you can quickly get away with your screenshot game on Snapchat!

Bonus Tip: How To Screenshot Snapchat Without Them Knowing On Mac?

Follow this simple trick to take screenshots of Snapchat Story secretly on Mac:

There is a simple trick to screenshot on Snapchat without them knowing. You have to enable the QuickTime Screen Capture to perform the task. For this:

You have to connect your iPhone to your Macbook and open the QuickTime Player app.

Once the setup is done, you have to hit the record button, open Snapchat, and you will be able to screenshot Snapchat without notification.

We hope our simple hacks will help you take a screenshot on Snapchat without the other person knowing of it.

As a reminder, we don’t endorse the act with any cruel intention but just for fun. So, you have to ensure you maintain others’ privacy and don’t cross the line!