Why Your iPhone Keep Randomly Beeping And The Fix 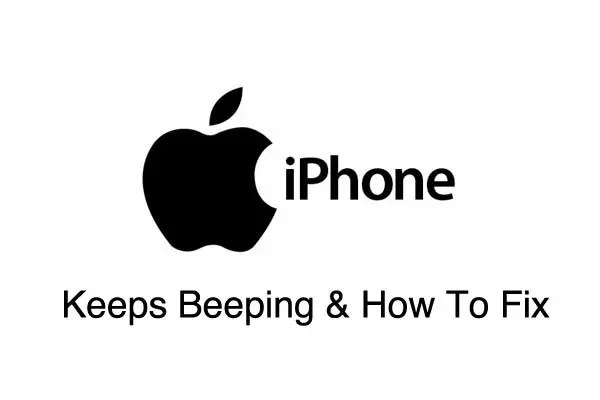 Your iPhone randomly beeps and you don’t know why. It may even sound as loud as a fire alarm! In this article, I’ll explain why your iPhone keeps beeping and show you how to fix this problem for good.

Why Does My iPhone Keep Beeping?

Your iPhone keeps beeping because an ad is playing an mp3 file which you are hearing through your iPhone’s speaker. The ad is likely coming from an app you have open on your iPhone, or from a web page you were viewing in the Safari app.

Occasionally, an app malfunctions. If you haven’t closed it definitively, then it may continue to run waywardly in the background, possibly resulting in your iPhone’s random beeps.

What To Do When Your iPhone Keeps Beeping

Close Out Of Tabs In Safari

If your iPhone started beeping while you were browsing the web on Safari, it’s a possibility that the beeps are coming from an ad on the web page you were viewing. If this is the case, you may see a strange mp3 file such as “smartprotector.xyz/ap/oox/alert.mp3” playing in your iPhone’s audio widget. To turn off the ad, close out of the tabs you have open in Safari.

To close out of your tabs in Safari, open the Safari app and press and hold the tab switcher button in the lower right-hand corner of your iPhone’s display. Then, tap Close All (Number) Tabs.

Close Out Of Your Apps

Safari isn’t the only app that may cause your iPhone to beep randomly. Many users have reported that their iPhone keeps beeping after using apps like theCHIVE, BaconReader, TutuApp, the TMZ app, and many more.

If your iPhone keeps beeping after you use a certain app, it’s best to close out of the app immediately after the beeping begins. If you’re not sure which app is causing the beeps, close out of all of your apps just to be safe.

To close out of apps, double-click the Home button to open up the app switcher. You your finger to swipe apps up on and off the screen. You’ll know an app is closed when it no longer appears in the app switcher.

Now that the beeping has stopped, check the App Store to see if the app that’s causing your iPhone to beep randomly has an update. Developers frequently release updates to patch bugs and fix widely reported problems.

Settings or Other Issues

As a last resort, restore your iPhone’s settings or the entire device to its original factory condition. Back up your iPhone before attempting this, so that you can restore your photos, apps, contacts, settings and other data to the iPhone later on. Touch “Settings” on your home screen, followed by “General” and “Reset.” Choose “Reset All Settings” to see if that solves the beeping problem; if not, choose “Erase All Content and Settings,” followed by “Erase iPhone.” Then, slide to open the iOS Setup Assistant that appears onscreen and choose “Set up as new phone” on the next screen. If your iPhone continues to randomly beep even in this pristine condition, then it’s time to contact Apple support for help.

Another Reason Why Your iPhone May Be Beeping

By default, your iPhone is set to receive alerts from the government such as AMBER alerts and Emergency alerts. Sometimes, your iPhone will beep loudly to make sure you notice the alert.

If you want to stop receiving these alerts, open the Settings app and tap Notifications. Scroll all the way to the bottom of the menu to Government Alerts.

We hope you’ll share this article on social media or leave us a comment down below if you have other questions about your iPhone.