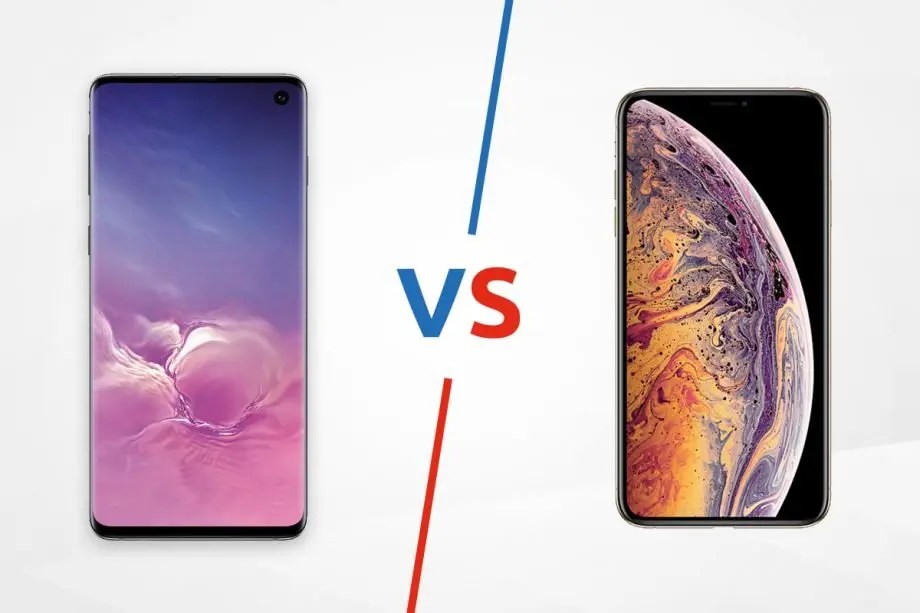 The new Samsung Galaxy S10 is now available to buy in all good phone retailers. It’s a stunning return to form for Samsung after the slightly lacklustre Galaxy S9.

But the comparison that most people will be making is with the latest effort from Samsung’s greatest rival, Apple. So which is the better phone between the Samsung Galaxy S10 and the iPhone XS?

Beyond that, though, how do these two phones compare? And more importantly, which should you buy?

The Samsung Galaxy S10 is made up of two sheets of glass, with a metal frame sandwiched between them. The screen curves and there’s almost no bezel and not even a notch. Instead, there’s a cut-out at the top right corner for the front-facing camera.

Round the back meanwhile there are three camera lenses lined up horizontally, and the lack of a visible fingerprint scanner is no accident – it’s in the screen.

The iPhone XS on the other hand also has a glass back and a metal frame, but its screen is flat, and while there’s very little bezel there is a large notch at the top.

The back meanwhile has a dual-lens camera tucked away in the top left corner and there’s no visible fingerprint scanner here either, but that’s because the iPhone XS doesn’t have one, relying instead on Face ID which is also present in Galaxy S10.

The iPhone XS’s 5.8-inch 2436 x 1125 OLED remains one of the most balanced, colour-accurate displays on the market. At the time of its release we called it “quite possibly the best smartphone screen out there right now”.

Apple has long had an edge when it comes to smartphone performance, and the iPhone XS shows it’s as sharp as ever. The A12 Bionic SoC was the first 7nm chip to market, just pipping the Kirin 980 in the Huawei Mate 20 Pro.

The custom Exynos 9820 in the Galaxy S10 is built using a slightly larger and less efficient 8nm manufacturing standard.

It’s worth mentioning that the Galaxy S10 packs an impressive 8GB RAM – literally double that of the iPhone XS. Of course, iOS is traditionally a much more memory-efficient OS than Android, so the practical repercussions of this spec difference are minimal.

While we’re talking about memory capacities, the Galaxy S10 offers either 128GB or 512GB, while Apple offers 64GB, 256GB and 512GB options. Samsung offers microSD expansion, this gives the Galaxy S10 the edge on storage.

There’s a 3,400mAh one in the Samsung Galaxy S10 and a 2,658mAh one in the iPhone XS. So Samsung’s is significantly bigger, but remember it also has a larger screen to power.

Both phones support fast charging and wireless charging, but the Galaxy S10 ups the ante with Fast Wireless Charging 2.0 and Wireless PowerShare (which lets the S10 itself wirelessly charge other devices).

In practice, these are both one-day phones, meaning you won’t have much juice left at the end of a day of frequent use. However, we’d give the edge to the iPhone XS when it comes to media consumption, which seems to hit the Galaxy S10’s battery harder.

When it comes to the photographic offerings of these two flagships, the Galaxy S10 goes one better than the iPhone XS. Quite literally.

Samsung has gone with a triple-camera set-up compared to Apple’s dual-camera effort. This doesn’t mean the overall results are 50% better than the iPhone XS of course – the Pixel 3‘s single-camera beats both of these – but it does mean that the Galaxy S10 can take ultra-wide shots in addition to regular and telephoto ones.

Another eye-catching feature for the S10 is the variable f/1.5-f/2.4 aperture of its main camera. This contributes to the Galaxy S10’s strong (though far from class-leading) low light performance.

It’s tough to call an outright winner between these two phone cameras. The iPhone arguably takes more balanced and better exposed pictures in everyday conditions, with a smarter and more reliable auto-HDR mode. But the Galaxy S10 is the more versatile camera, capable of going places the iPhone XS just can’t follow.

To a certain extent, you can ignore the scores we’ve given these two phones. The Samsung Galaxy S10 is the best Android phone available, while the iPhone XS is the best iOS phone available (taking the ‘Plus’ models out of the equation). If you’re particularly wedded to either platform, you should make your choice accordingly.