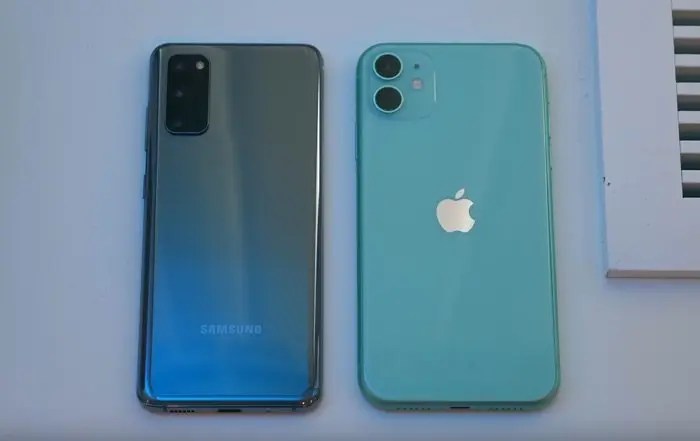 Are you thinking the Samsung Galaxy S20 is worth going for? Are you in the market for the latest high-end smartphone? Are you an iPhone user thinking you might want to give Galaxy S20 a go? Read on, as we compare both phones in this guide.

Design wise, the iPhone 11 and Galaxy S20 are different, but does have a few key similarities. Both smartphones features a aluminum frame.

Additionally, both handsets are more durable than their predecessors, while it also offers improved water resistance.

The iPhone 11 packs the newer A13 Bionic processor, while the Samsung Galaxy S20 is powered by Enxynos 990 (7 nm+) processor which is incredibly powerful.

In terms of battery capacities, Samsung high-end smartphones have 4,000 to 5,000mAh capacities, this is more than anything the iPhone has to offer at the current time.

But as for the Galaxy S20, it packs a fantastic Non-removable 4000mAh Li-Po battery, while the iPhone 11 comes with 3110mAh Non-removable Li-Ion battery.

We’ve heard rumors that iPhone 2020 might be a bit more significant with the OLED display coming to all models, 5G support, and more.

You will see these next-gen features in future iPhones and Android devices, so if you want to have a modern smartphone for the next few years, the iPhone 11 and Galaxy S20 is the best bet.

In general, if you’re on a tight budget, the iPhone 11 is still a great value.

As stated earlier, both phones are water-resistant, offering same IP rating of IP68 and can survive underwater at 2 meters (about 6.5 feet) for 30 minutes.