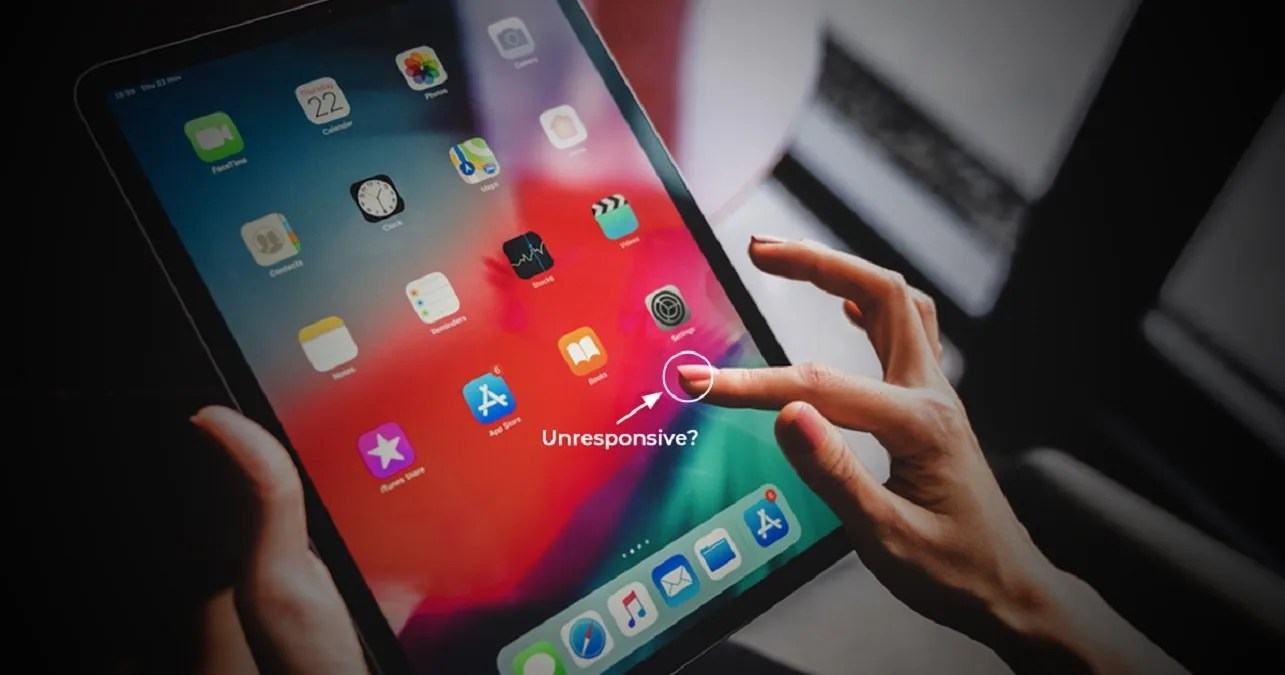 Some iPad Pro users report the touch screen is unresponsive at random. This can mean sometimes iPad Pro is not responding to any touch at all, or sometimes it may intermittently ignore touches or swipes or gestures, or the screen may appear to stutter or freeze after a touch, or even drop deliberate touches like typing letters on the onscreen touch keyboard of iPad Pro. This article explains what to do when your iPad Pro screen is unresponsive to touch.

If your touchscreen isn’t responsive or not working as expected, try the tips below to see if they can help to improve or resolve the problem for you:

After you try each step below, please check to see if your problem is fixed.

Before doing anything else, clean the iPad Pro screen. Press the screen lock button so that you don’t accidentally tap on anything you don’t want to, and then you just need a simple cloth and a tiny amount of water. You can use a lightly damp cloth, don’t use any abrasive chemicals or cleaner products.

Sometimes gunk, grease, or food smudges on the iPad Pro screen can make the screen unresponsive to touch, thus cleaning the screen can be an easy solution to resolve this problem.

Simply connect your iPad Pro to a wall charger and let it charge for a while. It is possible that your device battery is critically low. If you are using an Apple Pencil, charge your Apple Pencil also.

Remove the Case and/or Screen Protector

Lock the device screen, then try removing the case and screen protector from iPad Pro and seeing if the unresponsive touch screen issue continues.

Back up to iCloud (or a computer with iTunes, or both), and then install any system software updates that are waiting on the iPad Pro by going to Settings > General > Software Update.

It’s possible that the intermittently unresponsive touch screen issue is a bug or some other issue specific to some versions of iOS / iPadOS, so updating to the latest version of system software on the iPad Pro may help.

This is also called a hard reset. But do not worry, this won’t erase the content on your device. Here is how:

If the iPad Pro screen is still randomly unresponsive to touch, you can try enabling a system setting option called Touch Accommodations.

Apparentl,y you don’t need to enable or toggle any other setting within the Toufh Accommodations section, simply turning the feature on can resolve the unresponsive touch screen issue for some iPad Pro users.

Also read: How To Easily Fix iPhone 6 With Black Screen of Death

if your screen becomes unresponsive in certain apps. If this is the case, the problem is the app, not the screen. First, open the App Store app on your device to check to see is any updates available for the problematic apps. Try to update them. If updating does not solve your problem, you may want to delete them by touching and holding the app until it jiggles. And then tap the (x) sign (upper left corner) to remove the app.

iOS requires enough space to function properly. On your iPad go to Settings > General > Storage. You may want to delete apps you do not use or need. You may also want to remove media files, such as photos or movies.

Backing up and restoring may resolve the issue as well. This is also a step that Apple will require of you before you have a device serviced through warranty programs, so whether you want to do it or not, you should. Just backup your iPad Pro to iCloud or iTunes, then restore it from iTunes, or reset it and restore from backup using iCloud.

If your touchscreen still doesn’t work after trying the above tips, you may want to contact Apple Support or take your device to Genius Bar. If your iPad Pro is still under warrant, you can ask for a replacement.