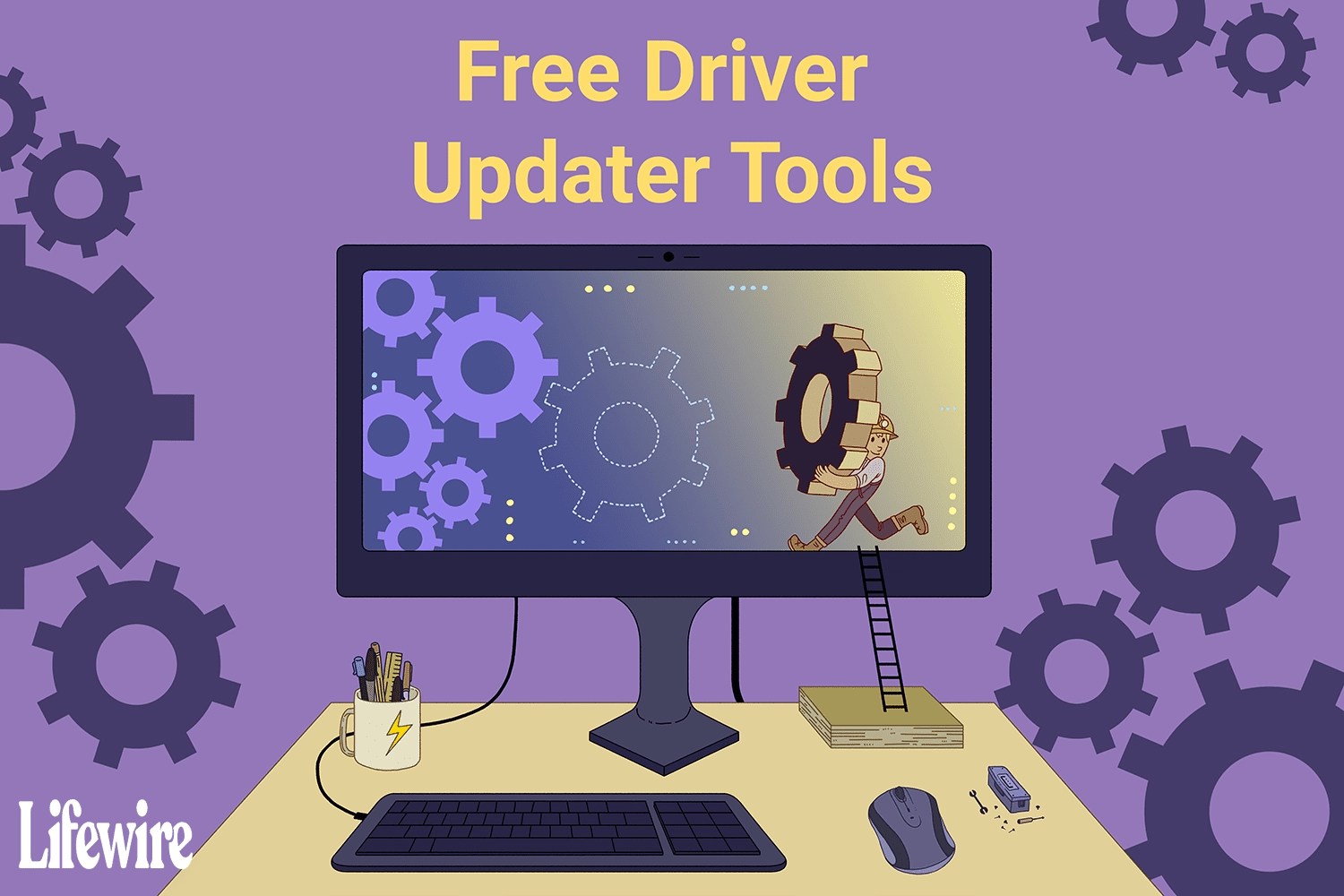 Driver updater tools do just what you’re probably thinking—they help you update some or all of the device drivers installed in Windows for your computer’s hardware. This tutorial will highlight the 11 best free driver updater tools.

These free driver updater programs make it easy to keep your drivers updated. Use one, and you won’t need to deal with Device Manager so much, nor will you need to find the right driver from your hardware maker yourself.

AVG is a top-rated anti-virus site, and exclusively for the PC, it also offers a driver management tool. As the name suggests, this tool scans the system, identifies expired drivers, and replaces them with the latest versions.

It checks with 100+ hardware makers to get the latest official driver. It also snapshots the working drivers on the system in case they need to be reinstalled for any reason.

AVG has a good reputation for making reliable code, and this utility works tirelessly in the background to keep the computer performing at its best. Unfortunately, this comes at a price, with AVG Driver Updater one of the more expensive options on this list.

AVG provides a free trial version to download and install that will scan your system and report those drivers that need an update. But the trial won’t update them without a purchase.

Driverfix has one clear purpose, to find and update all outdated drivers on a computer of almost any age.

It scans quickly and competently, maintaining a database of over 18 million drivers. Once a driver issue is discovered, you can see how the download progresses. Before updating any drivers, the app will perform a backup as a standard Zip archive. You can access it later if things go awry or save it for safekeeping. A scheduler means you can scan at optimal times and perform back-ups when convenient.

The dark mode interface is trendy and cool. Plus, the features available are clear and straightforward. Price is fair, too, with options to install on 1, 3, or 10 PCs.

This app doesn’t play around with any add-on features. For example, virus protection, a VPN, or other security features you may not really want or need anyway. We endorse it because Driverfix is meant for one purpose only and doesn’t muddle matters.

Driver Booster is compatible with all versions of Windows and makes updating drivers simple, making it admirable. It runs automatically to find outdated drivers. When new updates appear, it will download them from inside the Driver Booster program, so you can avoid getting them manually from each manufacturer’s website.

There’s an option in the settings to install drivers in the background. This hides installation wizards and other popup messages. This is handy, so you don’t have to click through so many windows when installing new drivers.

DriverPack has a user interface that’s easier to use than most others on this list. There are only a few buttons and no confusing screens or options. In addition, this program supports bulk downloads and automated installs so that you don’t have to click through any installation wizards.

When you initially launch DriverPack, you can let it usually run in “regular mode” to automatically download. Then afterward, install all of the drivers for you. Or, you can use “expert mode” to pick the ones you want to update.

There’s also some basic system information in DriverPack and a software downloader that can install some recommended programs on your computer.

Snappy Driver Installer is another freeware driver updater tool that’s a bit like DriverPack Solution. Download several drivers at once for many different types of devices. After they’re downloaded, the program gives you immediate access to install the updates—with or without an internet connection.

This driver is simple and doesn’t even need to be installed. Instead, use an external hard drive to transport and install the downloaded drivers to any other computer. Snappy Driver Installer doesn’t feature advertisements and doesn’t limit download speeds. It can also install as many drivers as you need without any restrictions.

Driver Reviver is a driver maintenance tool developed by ReviverSoft (a subsidiary of Corel) in 2014. The company makes various other Reviver branded software products for PC and the Apple Mac. However, this one is exclusively for the PC.

What it aims to do is keep the drivers on the system concurrent. It also prevents the system from accidentally installing corrupt or malware-infected drivers. We liked the feature that it creates a restore point before installing drivers. Enabling the system to be restored more quickly should the new drivers cause a problem.

It also has a useful option to automatically scan when Windows starts, allowing the drivers to be updated before working on the computer.

ReviverSoft claims that its driver database contains over 10 million files. Although, we assume that this includes all versions of many drivers. We don’t think there are so many hardware devices for Windows.

As the title suggests, this is the twentieth version of Driver Genius by Avanquest Software.

Avanquest offers a small but effective tool that manages driver updates on the PC. It also tracks more than a million hardware drivers to ensure that the right ones are on your computer.

The level of user intervention is shallow, as this solution is practically fire-and-forget. Once installed, the application scans the drivers installed and ties these against a driver versioning database. Then it downloads and installs the latest ones.

When these activities are scheduled, it is controllable by the user so that it doesn’t repeat the typical Windows irritation of initiating a reboot while using the system. And it notifies you of new driver releases.

What makes this one special is that it will bundle all the drivers into an executable file for you. A facility that hastens the reinstalling of a system dramatically. It also eliminates old drivers, so Windows can’t reinstall them accidentally.

Lastly, this Platinum release has a few extras. It includes a system booster that tweaks a system for better performance and another tool that optimizes SSDs.

Driver Talent (previously called DriveTheLife) is an open driver updater program that downloads device drivers, so you don’t have to search the internet for official download links. In addition, this application updates outdated and lost drivers, repairs corrupted ones, and backs up all your installed drivers.

The size of a driver and its release date and version number are displayed for you before you download it to authenticate you’re getting what you’re after.

An alternative version includes network drivers and works offline, perfect if you need to install drivers but don’t have the proper network driver installed.

DriversCloud (previously called Ma-Config) is a free web service that locates detailed information about your hardware and software, including outdated drivers. The procedure works by downloading a program that allows a web browser to gather information from your computer.

You can find categories such as BSOD Analysis, My Drivers, Autorun, Network Configuration, and other areas you can browse from the website.

When you need to update a driver, inspect the new driver’s information compared to the installed driver: the version number, manufacturer, INF file name and date, and hardware ID.

DriverIdentifier is a simple but functional free driver updater program. It scans for drivers if you don’t have an internet connection. This is especially useful if your network card driver isn’t working. When the scan finalizes, DriverIdentifier saves the list of drivers to an HTML file.

Just open the file on a computer that does have an internet connection. This helps the DriverIdentifier website to cross-reference the results with their databases. In addition, drivers that need updating will have an Update link next to them.

The one-stop shop for driver issues. DriverFinder is a fundamental tool that scans your Windows system. It recognizes those drivers that are either missing or need an update. And, it can find the latest versions and install those.

Most driver sources come directly from the hardware makers, so they’re generally the ones you’ll want. And it can also backup all the drivers currently used, which is ideal for those that need to reinstall a system promptly.

However, a few downsides to this solution need to be mentioned. First, it has no install-all option, meaning that if you discover that the system needs twenty updates, you’ll be clicking twenty times to resolve each of them.

This issue is only a problem initially, as once you’ve run it a few times, the likelihood is that it will only find one or two drivers that need updating at each scan. Unfortunately, it also doesn’t include a scheduler to run scans automatically, though you can have it run automatically when Windows launches.

DriverFinder has several payment systems, including a 1-PC license, with the option of paying extra to protect more computers. Signing up comes with a promise of no automatic recurring or auto-billing.