The Best Fallout 4 Mods For Xbox One, PS4 And PC 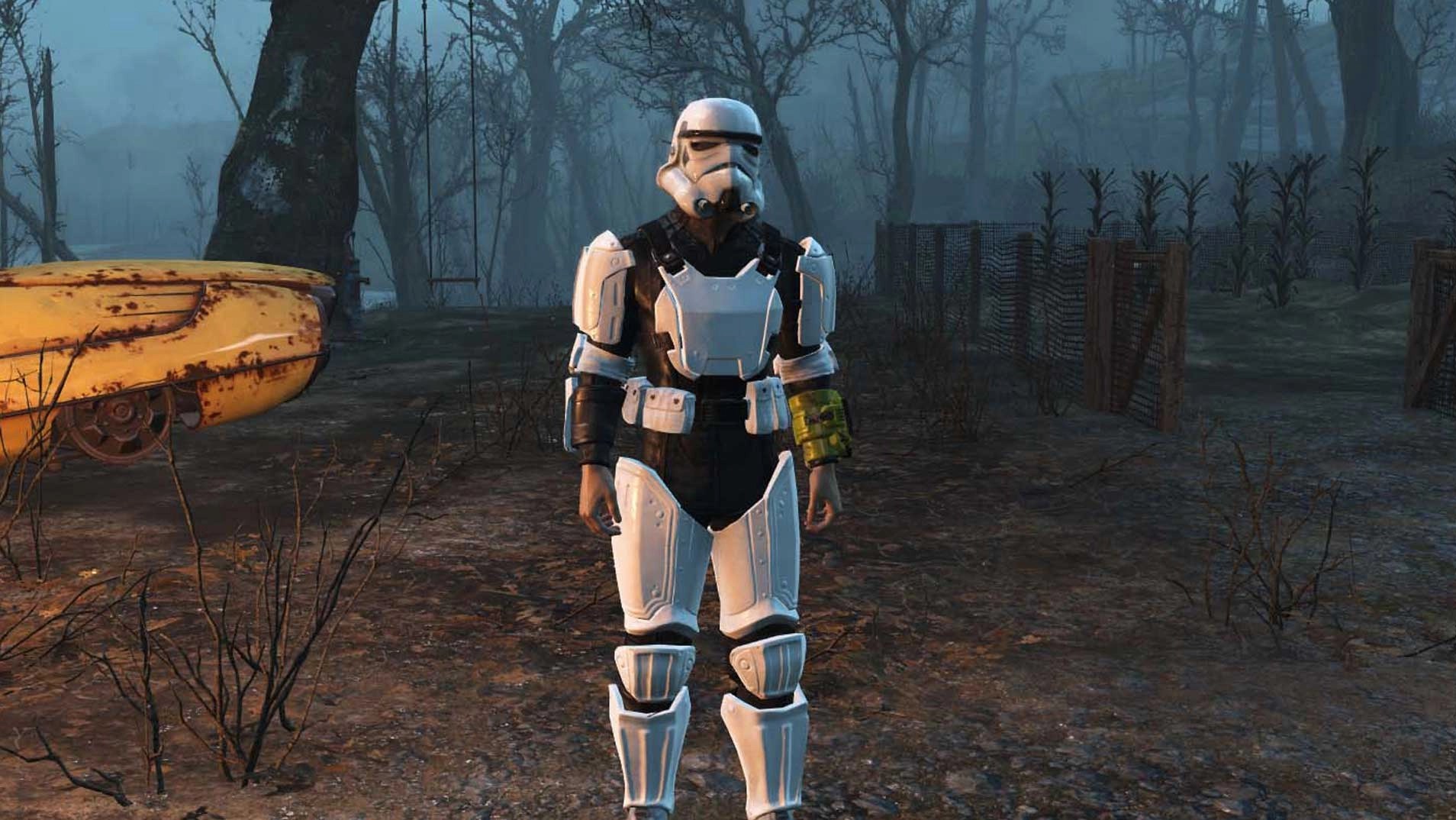 Bethesda’s Fallout 4 is an expansive open-world game filled with hundreds of hours of content in the base game alone, set in a beautiful but desolate wasteland. While Fallout 4 offers players hours upon hours of fun in both the vanilla game and DLC, a unique feature of Bethesda games is how readily mod-able they make their games be. This article will show you the best Fallout 4 Mods for Xbox One, PS4, and PC.

After launch, Bethesda will make their assets available for players to obtain to make the game easier to mod, and the modding communities of Fallout games are some of the most creative individuals who can add many more stories, weapons, and NPCs to Bethesda games while also breathing new life into games years after release.

Thanks to some engineering wizardry, almost all of the Fallout 4 mods listed below can also be tacked on to the PS4 and Xbox One versions of the game.

Despite the bursts of color occasionally seen in Fallout 4, you can’t deny that eventually, you’ll get fed up with the dreary yellows and browns of the wasteland. SimpleSeasons changes everything by turning the apocalyptic world into a feast for the eyes (but not the senses, which anyone with hayfever will be happy to hear).

If you’re looking for your weapons to pack more punch, you might want to check out the Legendary Modifications mod. This mod adds a new modification slot to your weapon and armor crafting options, allowing you to include one legendary weapon or armor attribute to your item in exchange for a significant amount of materials.

The Craftable Ammo mod adds even more crafting to the expansive build-fest that is Fallout 4, but we have no problem with that. The mod includes a new crafting table called the Reloading Workbench, allowing you to take materials and fill your ammo stores with plenty of bullets and bombs. There is no need to wander the radioactive wilderness, looting bodies and checking drawers for forgotten ammo. Just get crafting and make it all yourself.

Also read: How to Make a Water Breathing Potion in Minecraft

Infinite Ammo For Your Companion

The trouble with giving your companion a weapon other than their default choice is that they love to burn through your ammo. The Infinite ammo mod solves that problem. As long as your companion has one round of ammo for their respective weapon in their inventory, they can fire forever, except for the Fat Man mini-nuke launcher, because that could create a disastrous situation.

Suppose you’re a bit of a fashionista in Fallout 4. In that case, you’re going to want to download the Armorsmith Extended mod, which adds a new Armorsmith crafting table that allows you to make clothes and armor, and lets you wear gas masks and bandanas under more hats, and lets you upgrade every piece of clothing and armor.

It makes every piece of clothing and armor more valuable, which is a good thing. Unfortunately, it’s not on PS4, but Unified Clothing Overhaul is a super replacement. Of course, you have to make sure Armor and Weapon Keywords Community Resource is installed first.

The standard Fallout 4 sets of structures, furniture, and objects you can build and place into your settlement, is pretty limited. Still, there is a much larger selection when you add Settlement Supplies Expanded. In addition, with the mod installed, you’ll find hundreds of new objects to add to your virtual home. The new items include everything from vault doors and barbed wire concrete walls to trees and even aircraft.

When conversing with other characters in Fallout 4, sometimes your character can say the darndest things. Unfortunately, using the default paraphrased dialogue options don’t always clearly convey how your character will respond to that choice. You take out all of that guesswork with the Full Dialogue Interface mod.

The entire response is written out on the dialogue option, which might help your conversations go the way you intended. Unfortunately, because Sony doesn’t let their modders use external assets (thanks, Sony), this mod will not appear on PS4 for the foreseeable future. Damn.

Lowered Weapons make your character’s weapon handling safer for those around them. The firearm is lowered to a less aggressive position whenever the weapon isn’t being aimed or fired. It’s all about gun safety, people. If you aren’t careful, you’ll put someone’s eye out. Unfortunately, as with the Full Dialogue Interface, Lowered Weapons use external assets, so they can’t be ported to PS4. So yeah, I’m disappointed too.

If you’re fed up with seeing the same views as you explore the post-apocalyptic wasteland, then this mod can help you with a change of scenery. With subtle adjustments to the weather and lighting effects, your outlook on the world can be updated and refreshed.

For many people, the main appeal of the modern Fallout games lies in their freedom of exploration. There are few things as enjoyable as aimlessly wandering an open world environment, and as far as those go, the series has some of the best. True Storms, a weather mod for Fallout 4, can extend some of your virtual sightseeing hours by adding new weather types, new visual effects and textures for rain and dust patterns, new thunder and lightning effects, and enhanced interior audio during storms. If you’re only happy when it rains, you’ll probably adore True Storms.

Vivid Fallout – All In One

A collection of texture mods by the same author, Vivid Fallout is a set that will beautify the everyday surroundings of Fallout 4. Enhancing the textures of various landscape features like trees, rocks, roads, bridges, and concrete structures, the adjustments mostly change the contrast intensity, but with stunning results.

If you’re heavy into settlement building, you’re probably surrounded by familiar faces more often than not. To switch things up a bit, use the Better Settlers mod, which imports over 270 new settlers into the game. You can either use them as-is or use the extensive lore-friendly customization options, from equipment to gender ratio, stats, and mortality. With it, you can make your small communities seem more realistic.

More Where That Came From Radio

I’m a big fan of any mod that allows you to have more fun while exploring an open-world environment, and for me, new Fallout radio stations are a big part of that. So more Where That Came From not only adds 111 (!) songs to your Pip-Boy, they’re thematically appropriate and lore-friendly too, from “Atomic Cocktail,” as performed by The Slim Gaillard Quartet, and Arthur Crudup’s “I’m Gonna Dig Myself a Hole.”

Sadly, Bethesda can’t be trusted to fix all the issues in their games. So with every game comes the inevitable unofficial fan-made game patch. If you have the means to download and install mods, this should probably be your first one. Bonus: it’s been optimized to work with most mods.

Speaking of carrying weight, screw inventory restrictions in all their forms. They were only moderately inconvenient in Fallout 3 and New Vegas, but they’re intolerable in Fallout 4. That said, the game would be too easy without them. And while you can add to your carry weight through console commands, something about it feels cheap, like you’re cheating. Probably because you are. So if you’d like to balance the weight restrictions better and tweak them according to character stats in a more lore-friendly way, this mod is for you.

Given the quality and depth of the companions in Fallout 4 (featuring some of the best writing in the entire game), it’s downright criminal that the player can only have one companion at a time. However, according to the author of this mod, there’s evidence that the game was initially intended to allow the player to travel with both Dogmeat and one of the other companions simultaneously (as with past installments of the series, which allowed for two).

For whatever reason, this was taken out of the final version of Fallout 4. But luckily, you can put it back in again with Everyone’s Best Friend.

This mod favorably reminds me of The Sims 2: Seasons, arguably one of the best expansions in the Sims franchise. Fallout Season Project adds winter, spring, summer, and fall to the Commonwealth, with new weather patterns and environmental effects for each. Sadly, the mod doesn’t “change over” from season to season; you’ll have to set them by activating different files. It is, however, still an interesting look at what the wastelands would be like with proper seasonal patterns and puts a fresh spin on the sights, which is especially fun if you’re a Fallout 4 screenshot junkie.

Of all the settlement workshop-related mods, this one is probably the best. It includes seven new build sets, several prefab building units, hundreds of new decorative, lighting, and household objects in the game that were not included in the workshop, crop planters, new farmable crops, and a batch of new barriers and fences to bulk up the defense.

With all of these potential improvements at your fingertips, you can turn Fallout 4 into The Sims 4 and transform the Commonwealth into your post-apocalyptic kingdom.

See-through scopes are a must-have mod that makes it so you can see around the sides of a scope. This allows players to feel more comfortable during gunfights and gives them a sense of awareness they didn’t have prior. The game, by default, blacks out the screen around the scopes, making it so players can only see what is in their scope. However, this mod takes away the black area and allows players to see around them while using their scopes.

Modern Firearms adds a wealth of real-world tactical weapons to Fallout 4, but they aren’t handed to the player outright. Instead, players will need to purchase these weapons from traders for large amounts of bottle caps or will need to scavenge them from enemies or even territory. These weapons are very powerful and add an extra layer to the game’s gunfights.

The NCR Veteran Ranger armor adds the classic Fallout New Vegas cover armor to Fallout 4 but makes the player work to get it. This armor is great for the early game, and it looks incredible. No more goofy leather armor pieces over top of your bright blue jumpsuit. This armor can be found a couple of hours into the game at Diamond City and makes playing the early game a bit more enjoyable.

NVIDIA’s Vault and Atomic Radio are questline mods that add hours of gameplay to Fallout 4. They are both unique series of side quests that add not only an immersive storyline but unique items, fully voiced companions, and completely new areas to explore.

Voila! These are some of the best mods for Fallout 4. So get out there and get to modding Fallout 4.