The Best Cell Phones For Seniors In 2022 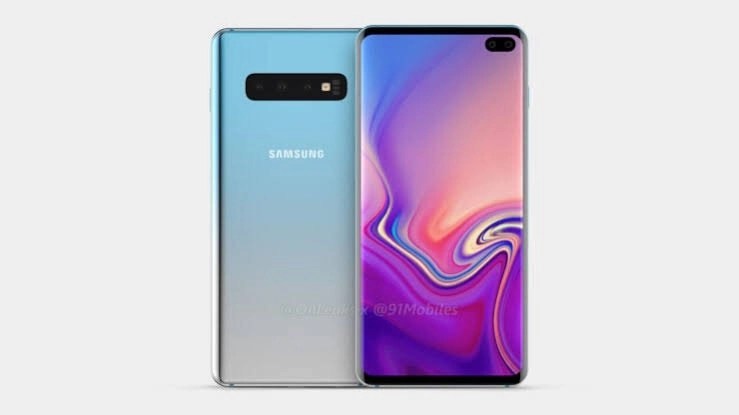 The best phones for seniors take into account all the needs of those who have reached their golden years. In addition, of course, there are accessibility needs and some physical disabilities to consider. But there’s no reason seniors should be out of touch, so their cell phones should be just as easy to learn and use as those used by younger generations.

A feature phone or smartphone can be handy for creating communities, sharing digital moments, and increasing communications between disparate people -especially now, when we’re learning the benefits of digital communications more and more. But not everyone can easily get their head around flashy features, so the best phone for most people isn’t always the best phone for a senior.

Most modern smartphones have “easy modes” or accessibility features that you can turn on. Generally, the best phones for seniors will have large buttons, a large bright display for easy viewing, wireless charging—meaning no fumbling with cables—and long battery life.

Thankfully, there’s a wide range of phones that cater to seniors’ needs that can be great for most grandparents, but if the senior you’re buying a phone for is particularly tech-savvy, some of the best phones right now might be good for them. Otherwise, there’s a range of features, flip or smartphones available.

Jitterbug is one of the big names in cell phones for seniors. That’s because Jitterbug and its carrier Greatcall built their phones specifically for those long-lived folks who want to stay connected. As its name suggests, the Jitterbug Flip is a flip phone with a small outside screen for incoming calls and notifications and a large inside screen with a custom operating system designed around simple yes/no navigation. The large buttons and bright screens are perfect for seniors because they’re easy to use. In addition, the loudspeaker makes phone calls a snap, even for those whose hearing could be better.

The camera on the phone isn’t the best, which is not surprising considering the flip-phone form factor. Unfortunately, the Jitterbug Flip is also exclusive to the Greatcall carrier, so if you’re a customer of another carrier, this phone won’t work. But Greatcall has no long-term contracts and uses Verizon’s nationwide network, which is very extensive. 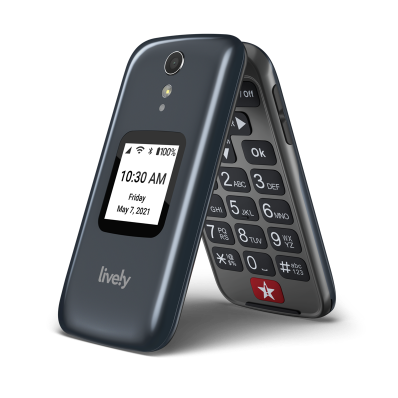 The Lively Flip is a basic flip phone with features made to suit seniors well. It doesn’t have any smartphone functionality a more tech-savvy senior might want, but it has a large, easy-to-read interface, simple navigation, and a loudspeaker. The result is a simple phone for anyone, so there’s no steep learning curve for seniors who aren’t used to cell phones.

A few extra features are made specifically with seniors in mind. The Lively Flip features an M4/T4 rating for hearing aid compatibility. It also has a 5-Star button so seniors can quickly get help in an emergency. It’s also got Amazon Alexa compatibility. 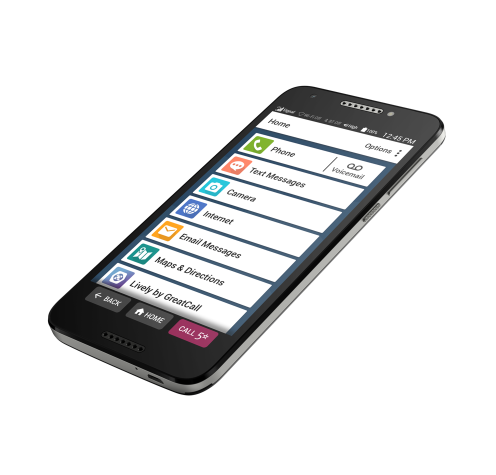 If you like the idea of Jitterbug but want a smartphone instead of a flip phone, the Jitterbug Smart2 might be for you. This is a 5.5 inch-smartphone powered by a heavily customized build of Android 9. As the name implies, this is a smartphone built with an easy-to-use interface with large buttons and clear text.

The camera is not impressive, and the phone itself is a little underpowered, but we’re assuming it won’t be used for high-powered applications like gaming. Speaking of gaming, there are a number of what Jitterbug calls “brain games” that are designed to help the user keep their mind active and sharp.

The main reason to look at this phone comes in the form of the health and service packages available. Its 5Star service is available 24/7 and is staffed by IAED-certified agents who can help locate a user, evaluate the situation, and get help if needed. A user can also speak with a doctor or nurse any time and even get prescriptions for common medications if needed. In short, the phone itself is underwhelming, but the services that come along with it can becritical and life-saving. 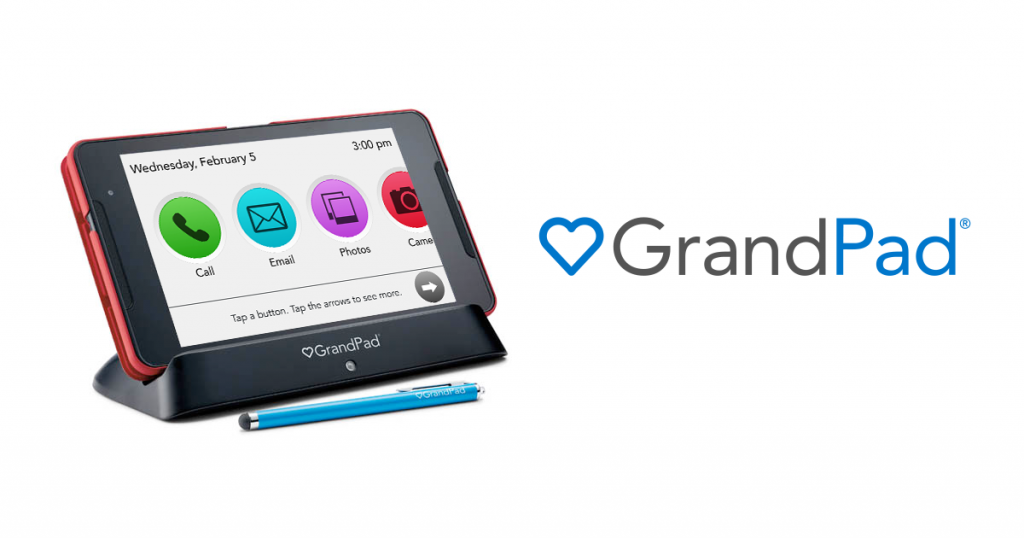 Just as its name implies, the GrandPad is a smartphone/tablet that offers easy ways for seniors to stay connected. It doesn’t require nearly as familiarity with tablet and smartphone functionality as typical Android and iOS devices require. GrandPad rocks an 8-inch, Full HD display with large, easy-to-read menu buttons for simple navigation, and it connects via 4G LTE on consumer Cellular or over Wi-Fi. It can also charge wirelessly on its dock, so you won’t need to worry about keeping track with finicky wires and power plugs.

Relatives can set up and manage the GrandPad for their love ones, populating the contact list with email address and phone numbers. One major consideration here is that this can help screen potential phishing attacks or spam callers, since they shouldn’t be able to reach the GrandPad.

The GrandPad will let seniors stay in touch through email as well as voice and video calls. It also supports a stream of social media, so seniors can see what they’re family members are sharing without needing to have their own accounts. 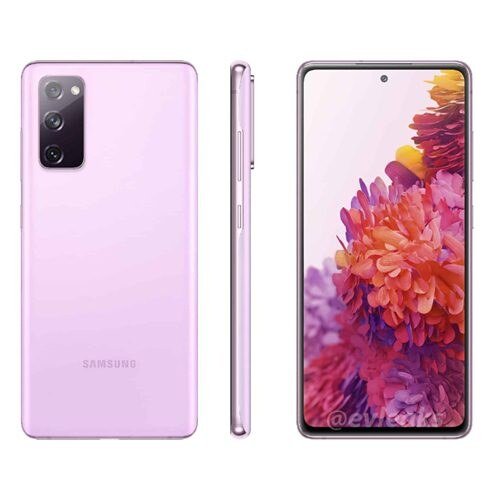 Samsung’s best 5G smartphone is easily the Samsung Galaxy S20 FE. Released in late 2020, this phone cuts a lot of corners to meet a low price tag compared to its older S20 siblings. But Samsung perfectly cut every corner to come up with the best combination of price and features you can find in a flagship phone.

It’s expensive for a fixed budget to be sure, but there’s no reason our elders should be relegated to flip phones and low-end smartphones. This phone is powerful and still comes at a lower price tag that punches way above its class.

All Samsung Galaxy phones come with an Easy Mode that turns the phone’s interface into large, easy-to-use and easy-to-read buttons. Plus this phone has a great camera setup, perfect for shooting photos of friends and family. 5G connectivity and the Snapdragon 865 processor means seniors won’t have to worry about sluggish performance. This is really the best value you can find in Android today. 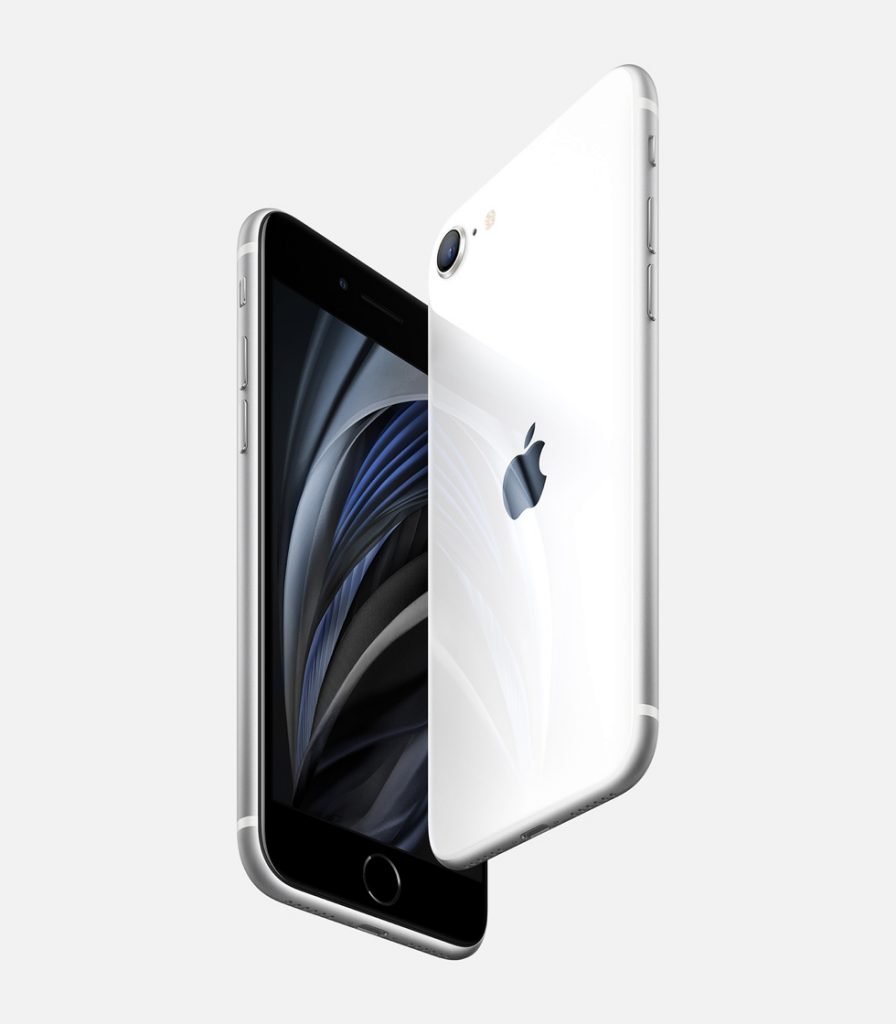 For the tech-savvy senior, the iPhone SE (2020) might be a great choice, as its an iPhone designed for people who don’t need all the top-end features of the newest Apple smartphones.

The second-generation iPhone SE has similar specs to the iPhone 8 in quite a few areas, but with a few tweaks to bringing it up-to-date with trends in 2020. Its screen quality, camera and design would seem outdated now, but unless the senior you’re buying a phone for keeps up to date with the latest tech, they won’t mind.

Seniors with an iPhone can also benefit from the nearly seamless transition between an iPhone and iPad whenever they might want an even larger screen. For the seniors buying this smartphone, an iPhone SE 2020 case is advisable, to bring extra protection to the phone and provide some useful benefits like somewhere to store cards. 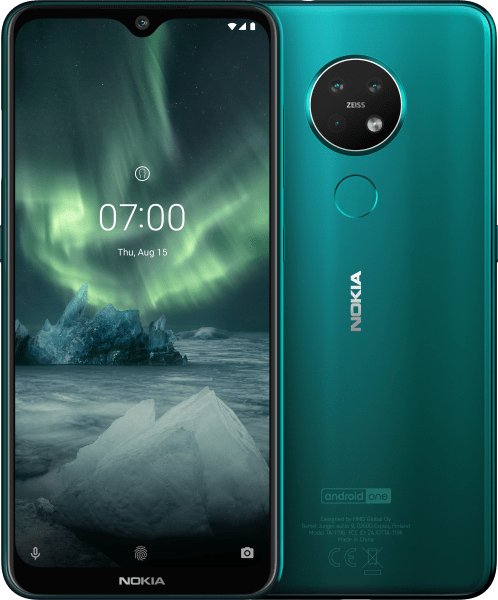 Nokia used to be one of the biggest names in mobile and it’s making a comeback of late under new ownership. One of the best values Nokia has to offer is the Nokia 7.2. This phone lies somewhere in between the budget and midrange category, so it has a nice price tag.

You get a large screen that is very clear and easy to read. Even its base model starts with 128GB of storage and is expandable via microSD card. The cameras on this phone are inconsistent along with video recording that’s not super great, so maybe you won’t need to extend the memory. But for those shutterbugs, the addition of expandable storage is nice. Plus, camera lovers might be able to squeeze more out of this camera than the average user.

All the same, this is a great value in the smartphone world, and should fit into the budget for a lot of people. 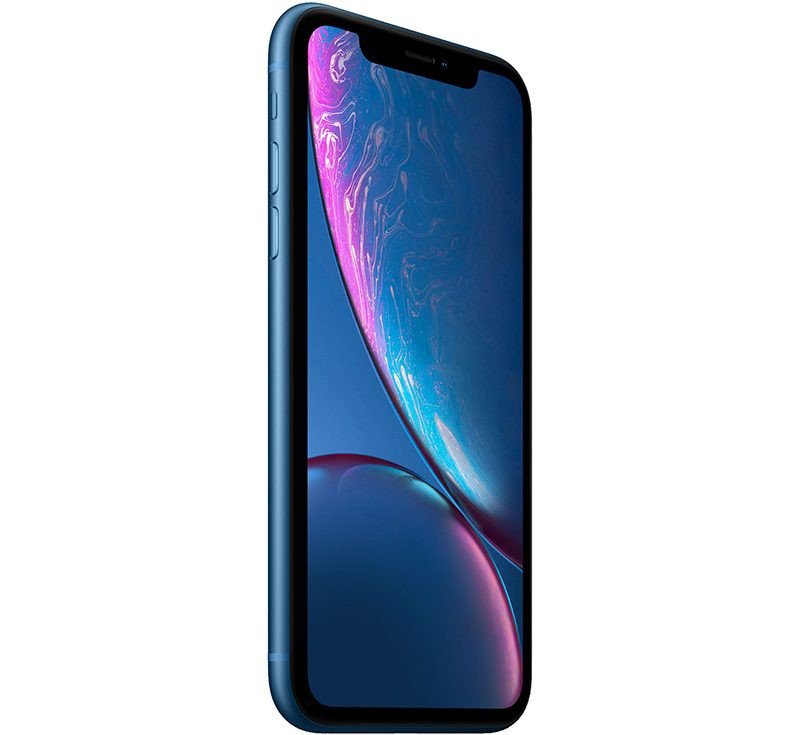 If you want a newer iPhone for the senior you’re buying a handset for, the iPhone XR is a great choice, because it’s slightly more modern than the iPhone 8 Plus. It was the affordable device of its series, and Apple now uses it to bridge the gap between the iPhone 8 and newer handsets in terms of price.

The iPhone XR has a relatively large 6.1-inch display, can be upgraded to the newest iOS operating system (and will be eligible for updates for years to come), and a decent 12MP rear camera. There are also plenty of iPhone XR cases to choose from to protect the handset.

On top of that, there are plenty of colorful iPhone XR options available – it’s not as dull as other smartphones, and whether you want a vibrant red, yellow, coral or blue device, or the more common black or white, there’s plenty of choice. 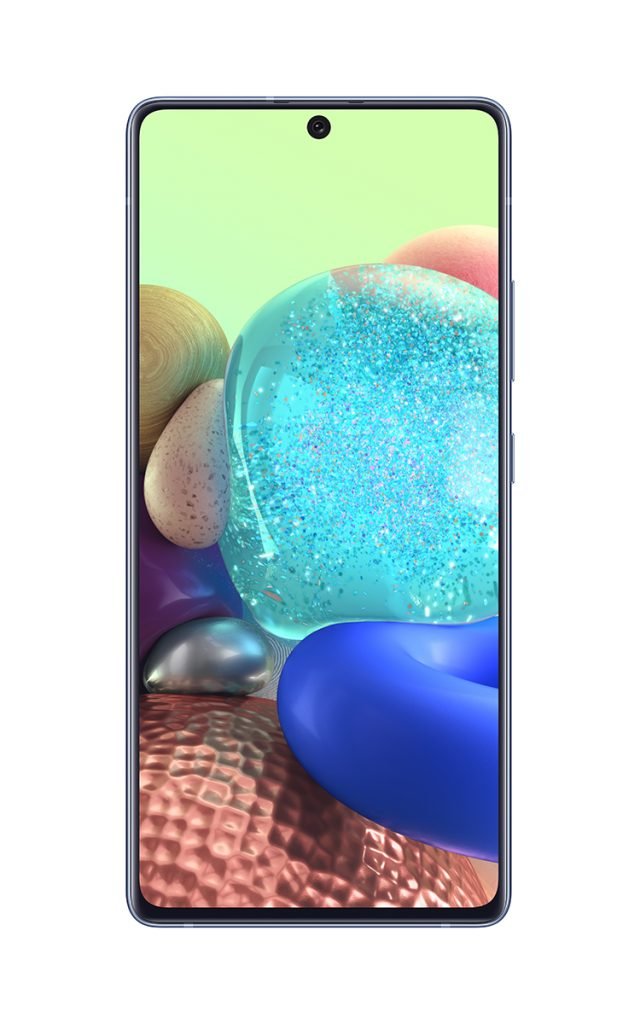 A solid entry in the midrange class, the Samsung Galaxy A71 5G should get consideration. Samsung’s Easy Mode comes along for the ride on this phone as well, and it looks great on the stunning screen. You also get a respectable 64MP camera that’s good in a lot of lighting situations and, of course, 5G capability for future-proofing.

The build quality on the phone itself is a bit suspect. There’s no IP rating, so you’ll want to keep it away from water. Moreover, the phone has plastic backing while its screen sports Gorilla Glass 3, which isn’t bad, but it’s several generations out of date. There are stronger options available out there, but as long as you take care of your phone, this phone will serve you for a long time to come. 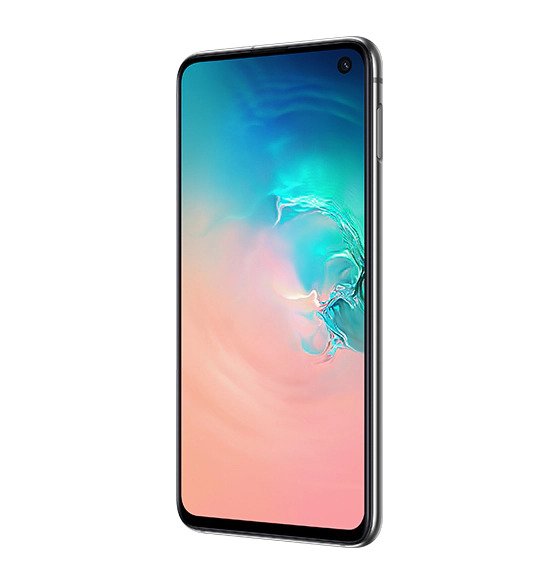 An easy-to-view operating system can be great for seniors, and Samsung’s One UI makes for very easy viewing indeed. The Samsung Galaxy S10e is the budget iteration of its S10 flagship range, so it’s decently affordable, but there are still some useful features here.

The 5.8-inch screen is big enough to make viewing easy yet small enough to use in one hand, so it fits in that perfect sweet spot. The side-mounted fingerprint sensor is also a lot easier than in-screen versions for most seniors, there’s a 3.5mm headphone jack here for wired headphones, and a battery that should get through a day pretty easily. These features would all suit a senior pretty well.

The phone is pretty responsive too, with a top-end Snapdragon 855 processor (well, it was top-end when the phone came out), so you won’t get confused texts frequently asking why the smartphone is taking so long to do things.