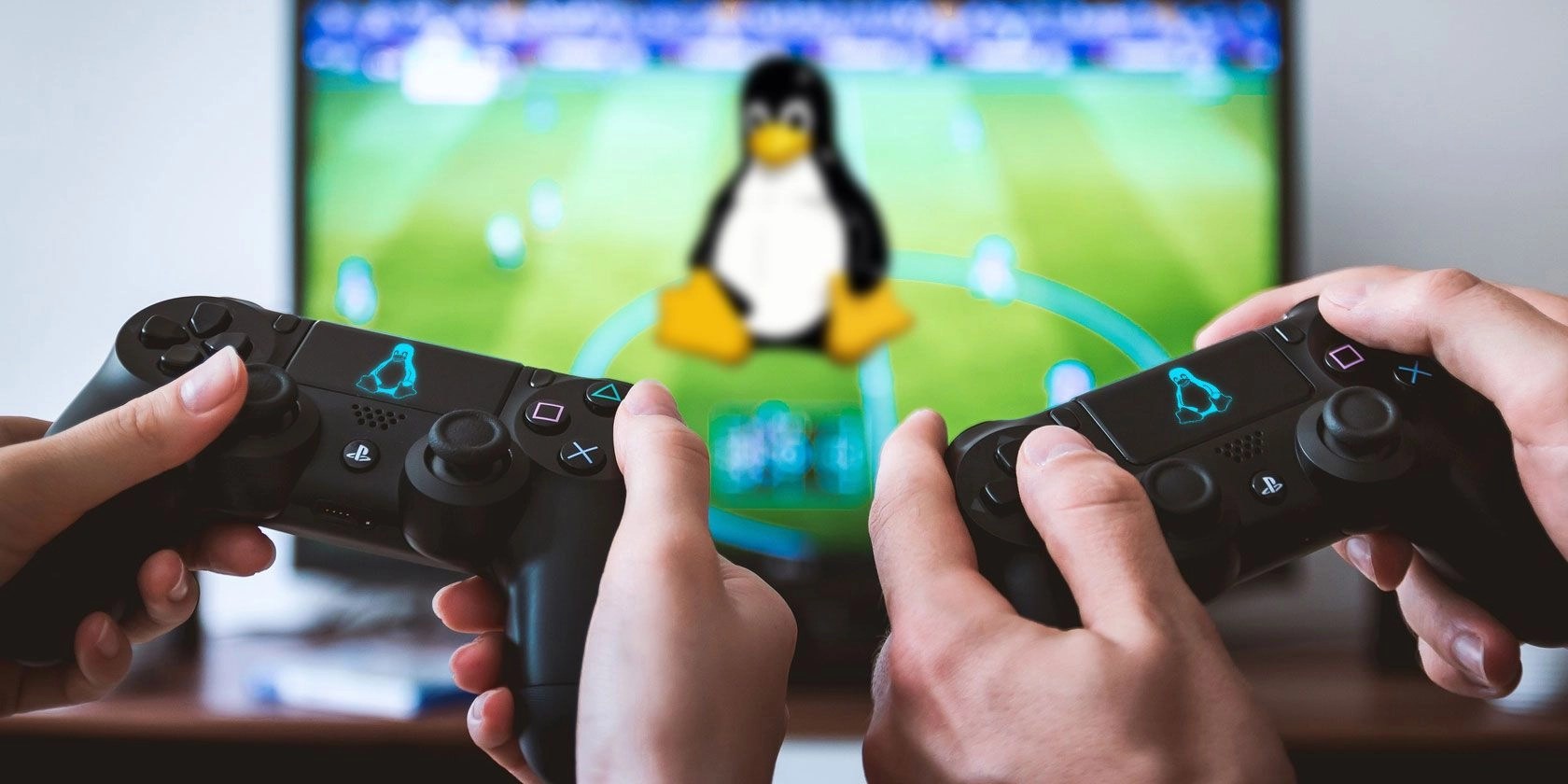 Linux might not be your first choice if you are a hardcore PC gamer. That’s fair because Linux isn’t treated as a first-class citizen when it comes to gaming. As a result, you won’t find the most awaited games of the year available on Linux natively. In addition, all the essential software tools and drivers needed for your shiny gaming hardware configuration may not be available on the Linux desktop. This tutorial will highlight the best Linux Distros for a better gaming experience.

Windows is the standard for gaming on a PC, but many users are turned off by how Windows handles personal data and its closed-source nature. This dissatisfaction is where Linux comes into play. Linux operating systems are open-source and can be the primary operating system on a PC, dual-booted, or run on a virtual machine. However, most Linux distributions aren’t as optimized for gaming as Windows. Thankfully, some Linux distributions (distros) are created explicitly for gaming. With the right Linux distro, retro gaming, couch gaming, and desktop gaming are all possible.

Here is a list of the best Linux distros for gaming without further ado.

The Ubuntu Gamepack OS is the best of the best when it comes to Linux distributions for gaming. It’s based on Ubuntu Pack 20.04, with many of the essential features users expect from an Ubuntu distribution. Additionally, Ubuntu Gamepack is easy to install and user-friendly, making it a solid choice for inexperienced Linux users.

As expected, Ubuntu Gamepack excels at gaming. As a result, the OS is packed with the most popular game management systems, such as Steam and ITCH.IO. In addition, Ubuntu Gamepack’s custom OS is compatible with over 85,000 games.

Because it’s based on Ubuntu Pack 20.04, Gamepack is a well-rounded OS compatible with many essential apps, like Microsoft Office. Thanks to its simplicity and distinct visuals, Ubuntu Gamepack’s user interface is similar to Windows 10. Handling basic tasks in Gamepack, like file management, is almost identical to its Microsoft counterpart. And for those that watch streamers, Ubuntu Gamepack comes with Gnome Twitch, letting users watch Twitch directly from their desktop.

GamePack offers a wide range of games for users to play, letting users customize their performance settings with Gamemodes. These Gamemodes change the operating system’s settings while gaming to optimize performance, making it perfect for users with weaker hardware.

Pop!_OS by System76 is based on Ubuntu, and you only get GNOME as the desktop environment.

It feels more polished than Ubuntu itself, and you can get most of the essential tools like Lutris, GameHub, and others right from the Pop!_Store (app store for Pop!_OS). In addition to this, you also get separate ISO files for NVIDIA and AMD systems.

So, depending on the GPU onboard, you can decide to install Pop!_OS using the correct ISO file, making your system ready to go out of the box. Not just limited to that, just because it is an operating system developed by a PC/Laptop manufacturer, you can expect it to be ready for the latest and most excellent hardware.

In a nutshell, Pop!_OS is easy to use, perfectly suitable for beginners, and compatible with the latest hardware. Feel free to try out the latest LTS (Long-Term Support) version of Pop!_OS.

Unlike the others on this list, Drauger OS is built on a low latency Kernel OS. A low latency OS prioritizes latency over throughput, making it a fitting choice for gamers. However, it isn’t an OS designed for daily use. Drauger OS is clunky, hard to install, and doesn’t come with many of the desktop apps one would expect from a Linux distro, like a word processor. Its UI isn’t as sleek or easy to use as Ubuntu’s Gamepack. It does come with Wine, allowing users to install Windows programs.

What sets Drauger apart from other distros is its game management software. It comes preinstalled with more game management systems than any distro on this list, giving users more options. These include Gamehub, Lutris, Legendary, and PlayOnLinux.

Its graphic driver support is impressive as well. Drauger is faster than most Linux operating systems, adapting the latest Nvidia drivers for use in a Linux environment. On top of this, it impressively has Vulkan support. Because Drauger OS is a low latency OS, it has exceptional GPU support. Drauger OS is the best bet for outstanding performance in Linux. This distro’s community is another standout feature. Drauger has a massive dedicated community constantly improving the OS, and they don’t show any signs of stopping.

Ubuntu is a no-brainer. It’s the most recommended starting point if you’re new to Linux, no matter whether you want it for work or gaming. However, I find Pop!_OS more appealing, and there are some differences as well.

You may not find all the Pop!_OS features in Ubuntu, but you can try out some GNOME extensions available to get a similar feature set.

Overall, Pop!_OS and Ubuntu should be a great choice, given that you have a decent hardware configuration (and not an old rig). Similar to what I mentioned for Pop!_OS, you should prefer using the latest LTS version.

Fedora Games Spin is a Fedora Spins OS with a GNOME desktop environment. What makes Fedora Games Spin a solid choice for gaming is its extensive list of preinstalled free games. Over 100 free Linux games come preinstalled on this OS, letting users start gaming as soon as the OS is installed. The library covers everything from racing games to turn-based strategy games. Don’t expect AAA games, though. Despite coming with a wide selection of games, they are still open-source and free, with their graphics reflecting as much.

In addition, it’s user-friendly, which will satisfy new Linux users. Although Fedora Games Spin has an easy-to-use interface, it doesn’t come with much of the default system software users need. However, thanks to its easy-to-use Gnome desktop environment, users won’t have trouble downloading the other games and applications they need.

If you do not like your experience with Ubuntu, you can try Linux Mint. Technically, it does a few things better than Ubuntu.

Linux Mint also offers LTS releases similar to Ubuntu. However, unlike some Ubuntu flavors (like Kubuntu & Lubuntu), which provide three years of system updates, Linux Mint offers five years of updates no matter what desktop environment you go for. In addition, you can choose Xfce, MATE, or Cinnamon edition.

Overall, Linux Mint is easy to use, compatible with a wide range of hardware and lets you install/remove the software without hassle using its software manager app.

Lakka is a lightweight RetroArch distribution designed for small, less powerful machines. Single-board computers like the Raspberry Pi are perfect for Lakka. Lakka doesn’t need powerful hardware because it’s designed for playing retro games. It’s a user-friendly OS made for couch gaming with a simple interface similar to the PlayStation 3’s home screen.

It doesn’t ship with any games, but installing them is easy. Users can connect their Lakka OS device to their network to easily drag and drop ROMs to the device or install them from an external drive via a USB. Of course, make sure you own a physical copy of a game before installing its ROM. The Lakka OS can run games from over 50 systems, including the Nintendo 64 and the original PlayStation. Additionally, Lakka supports most controllers and keyboards, with the OS auto-configuring buttons for users.

Garuda Linux is a somewhat less known distribution but could be a good fit for general-purpose desktop computing and gaming.

It is based on Arch Linux and provides several GUI applications to manage the system efficiently. The one thing that you would like here is the Garuda Gamer application.

It’s a GUI tool that lets you easily install gaming-related tools from one place. You can use it to install Itch, Wine, Play on Linux, Steam Proton, GOG, and many more such packages.

ChimeraOS is similar to SteamOS but more optimized and customizable. Like SteamOS, ChimeraOS is designed explicitly with couch gamers in mind. It loads directly into Steam Big Picture mode when you boot up the device. This ease of access means all users have to do is plug in a controller to get started, keeping players from reaching for a keyboard to navigate menus.

On top of playing Steam games, users can also install non-steam games via Steam Buddy. ChimeraOS guarantees hundreds of Steam games work on the operating system and comes with Steam Tweaks. This tool lets gamers customize their Steam gaming experience. In addition, steam Tweaks allows you further enhance your gaming experience. However, virtual machines are not supported with ChimeraOS, so the OS will need to be dual-booted.

Even though you can play games on any Linux distribution, the list mentioned above should give you some pointers to get a great user experience for your gaming adventure.