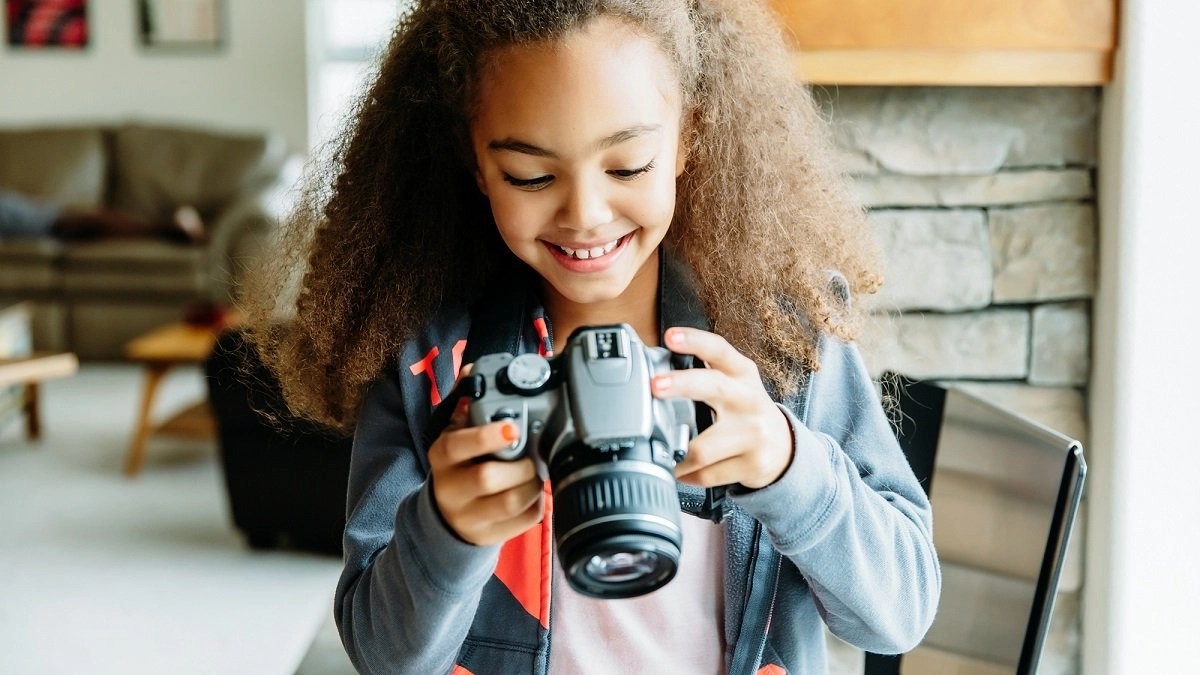 So, you’re looking for the best camera for kids? Perhaps your child is showing an interest in taking pictures on your smartphone or tablet. There several great cameras for children, some of which are expressly for younger people, and others that just happen to suit them.

Children, especially the young ones, remain as one of the only sectors in the market to not have a smartphone they can use for taking pictures, so it makes sense to get them one of the best cameras for kids.

Giving a camera to a young child can be a fantastic way to unleash their creativity, as well as getting an alternative viewpoint on your family trips, holidays and memories.

If you’re picking the best camera for kids, the first thing to think about is the age of the child for whom you’re buying. If you’re shopping for a toddler, then something brightly colored and simplistic is the way to go, but beyond that things start to get more complicated.

Manufacturers have models for all different ages, so we’ve got cameras for toddlers in our line-up, and more advanced models that will be suitable for different ages. We’ve prioritized cameras that are simple and easy to use, and models that still take great pictures, as there’s no point otherwise! In addition, as everyone will be working to a different budget, we’ve factored in price as well.

Choosing the “best” kids camera is quite a difficult task, since there’s quite a high number of variables. For example, if you have a very young child, picking something like the VTech Kidizoom 5.0 makes a lot of sense, but if you’ve got a teenager in your charge, the likes of the Instax Mini 70 is more likely to appeal.

Here’s our list of the best options to consider for your kids. 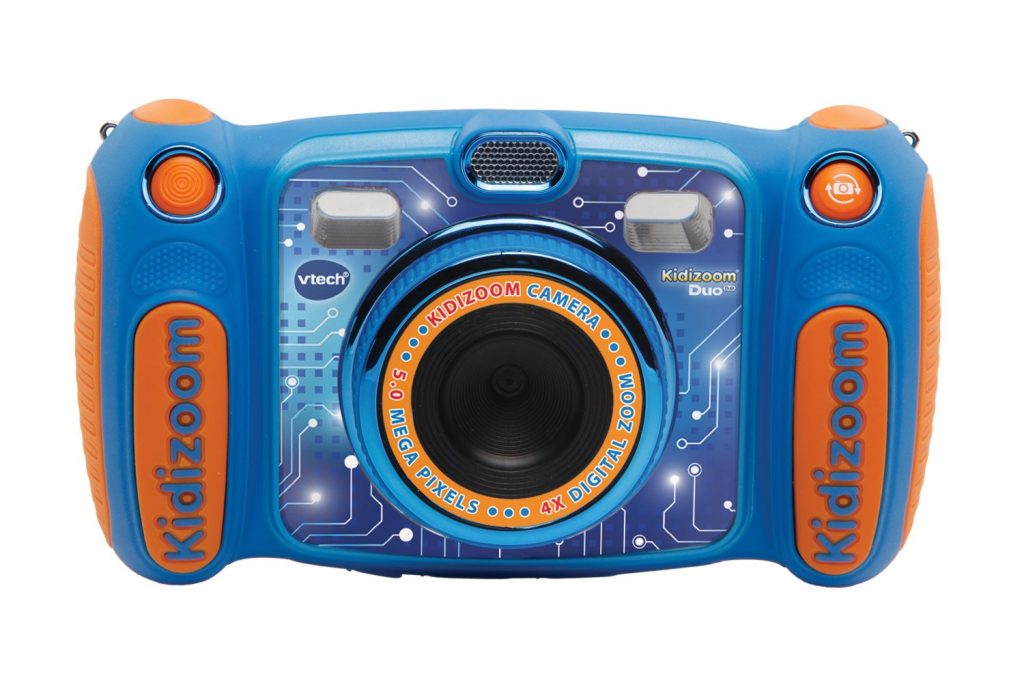 VTech makes a range of brightly colored, big-buttoned, entry-level tech gadgets for kids, and this is its current digital camera offering. The build quality is great, with its oversized rubbery build absorbing the shock of occasional drops, with big meaty grips on either side of the recessed lens for small hands.

While the camera and its controls may be relatively big for the average intended user, the specs have been improved with the most recent edition of this camera with a 5 megapixel sensor, coupled with a 4x digital zoom. On the back is a 2.4in LCD for composing and reviewing shots, through which you can also play five built-in games, so you’ve got a backup if the novelty of taking pictures wears off. The VTech KidiZoom Duo camera uses 4x AA batteries and a microSD card, that you will need to buy separately. So, the best camera for kids? Yes, but only if they’re very young. 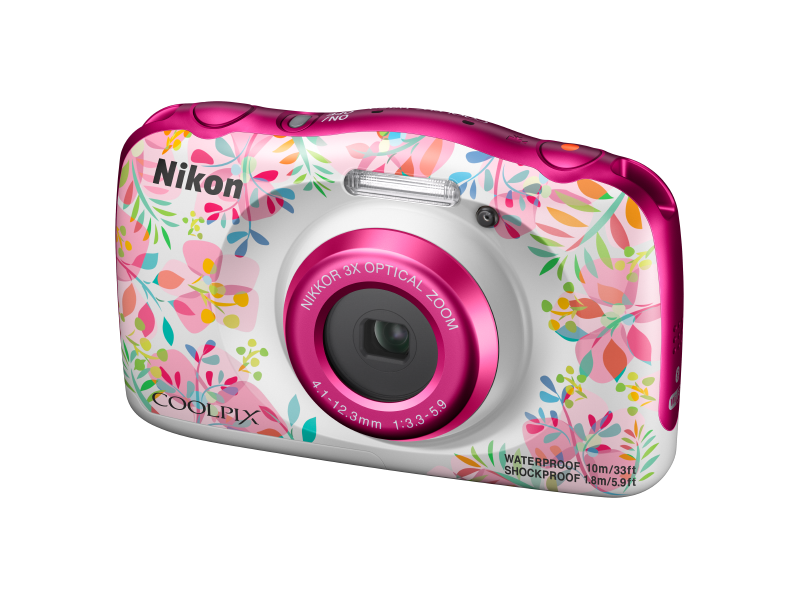 Available in 4 vibrant kid-friendly colors, the W150 is the ideal family camera. It is simple to operate, with large chunky buttons and a range of easy-to-use beginner-friendly options. It also uses icons, rather than words, for many of the settings, which is another bonus for young children. In addition, the Nikon Coolpix W150 is waterproof and shockproof, making it well placed for a trip to the park, or a bit of rough play in the playground. You likely won’t end up with masterpieces from the W150, but with its affordable price and tough credentials, it’s a great little starter to pique your kid’s interest. 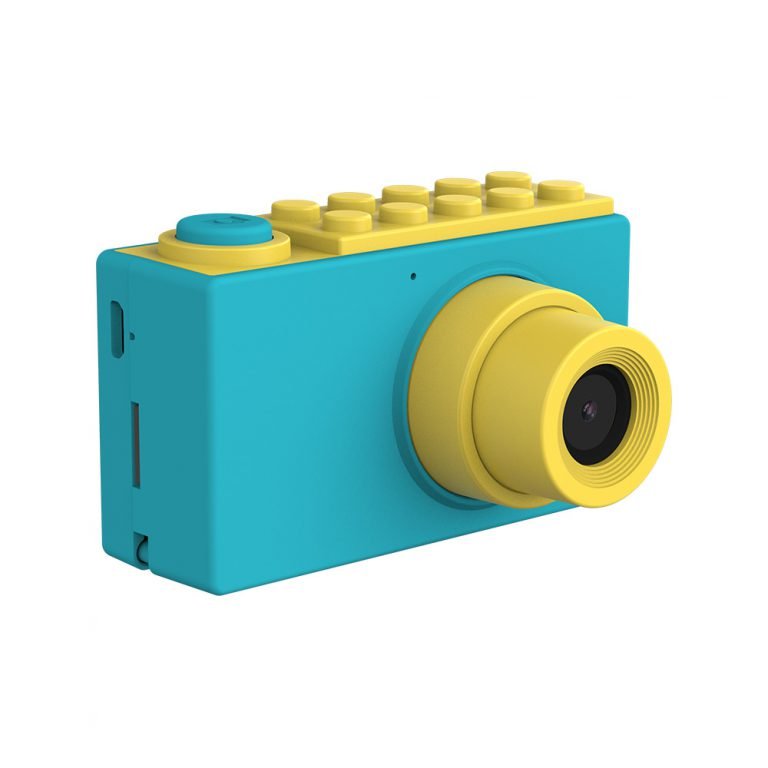 Oaxis myFirst Camera 2 8-megapixel camera is designed for kids aged around 4 to 8, and comes with a decent set of features to keep the curious mind occupied. It has an 8 megapixel camera, but video quality is reduced to a low-res 320×240 pixels.

An appeal of this camera is that it comes supplied with a waterproof housing, that can be used at depths of up to three meters (10 feet) – but you do need to check if the housing is secured properly before diving into the pool! Another fiddly operation is inserting and removing the optional microSD card – but this does at least mean that the user can take lots and lots of pictures. Available in bluish or pinkish color to suit different tastes!

Instant cameras have made a comeback! They’re perfect for kids of all ages – even young ones, because they’re big, chunky and simple to use. And for that endless succession of kids’ parties that seems to last for about a decade, they offer some instant picture swapping fun to keep the party vibe going. They also mean you don’t have to spend half a day printing photos on your inkjet printer – the camera does all the work. 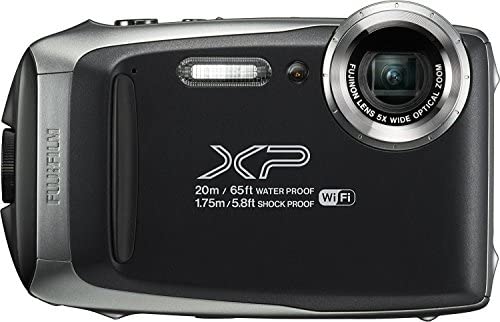 Probably the biggest selling point of the XP130 is its low price point. Available for under £150, there are much better rugged cameras available, but if you’re looking for something cheap and cheerful for children, it’s well worth a punt. While the Nikon W100 would be well suited to the under 5s, the XP130 probably suits the age range 5-10, with its slightly more complex operation. It’s got a 5x optical zoom and is waterproof, shockproof and all the usual tough credentials we expect from models such as this. Image quality is average, but it does well in bright light – so it should be perfect for holidays and sunny day trips. The bonus is, your kid can drop it, dunk it in the swimming pool and get sand all over it and it should still survive. 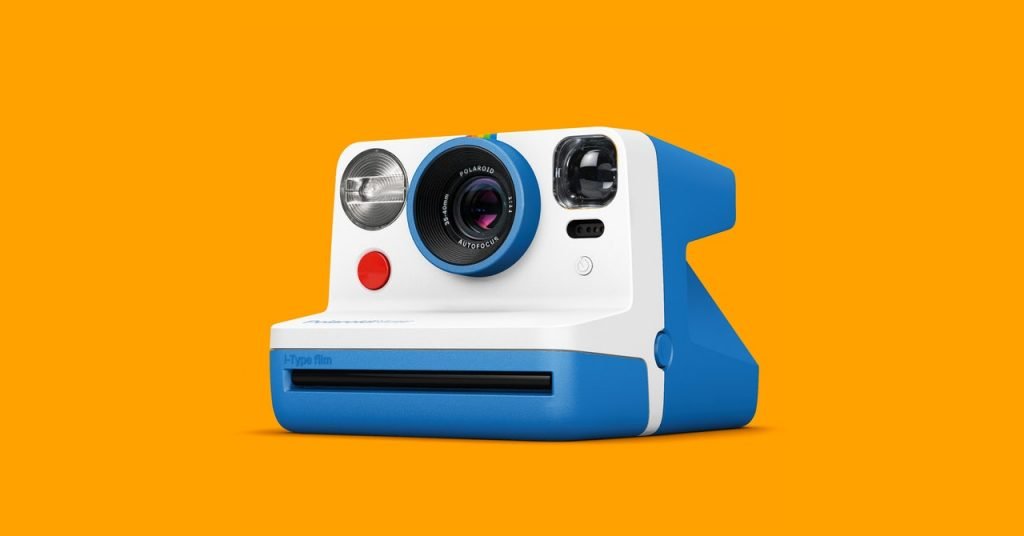 Embracing retro cool while still incorporating modern-day features, the Polaroid Now is a fantastic introduction to the charms and quirks of analogue image-making. Previous cameras in this resurrected Polaroid line have included the OneStep 2 and OneStep+, but this one out-shoots them both with better image quality and an improved flash. On the flip side, it’s a little simpler in operation with fewer specialist modes, so, while this might frustrate serious photographers, it makes it a perfect choice for kids. Images look fantastic with a single tap of the big, bright, unmissable button, thanks to the improved metering system ticking away behind the scenes, and the prints make for a perfect display in any home. 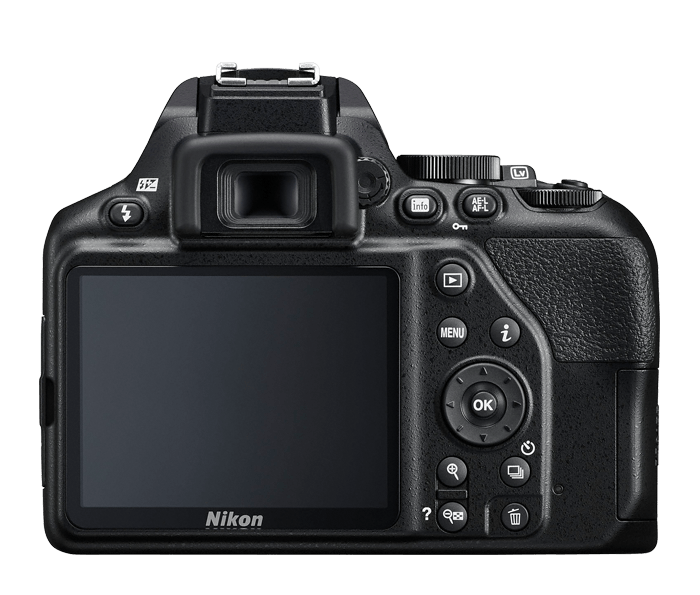 For slightly older children, the Nikon D3500 makes for a great choice for a very first DSLR, and you can pick it up for under £400 including a standard kit-lens. The D3500 features a Guide Mode which is fantastic for understanding how all the different functions work – making it the perfect learning tool for your child. With the option to add different lenses should your kids get really into it, the D3500 is a flexible option that kids can use right out of the box to get impressive shots.

On the downside, Nikon D3500 doesn’t have a touchscreen – something which might seem like an alien concept to children in 2022, while there’s also an absence of Wi-Fi (Bluetooth is included, though). 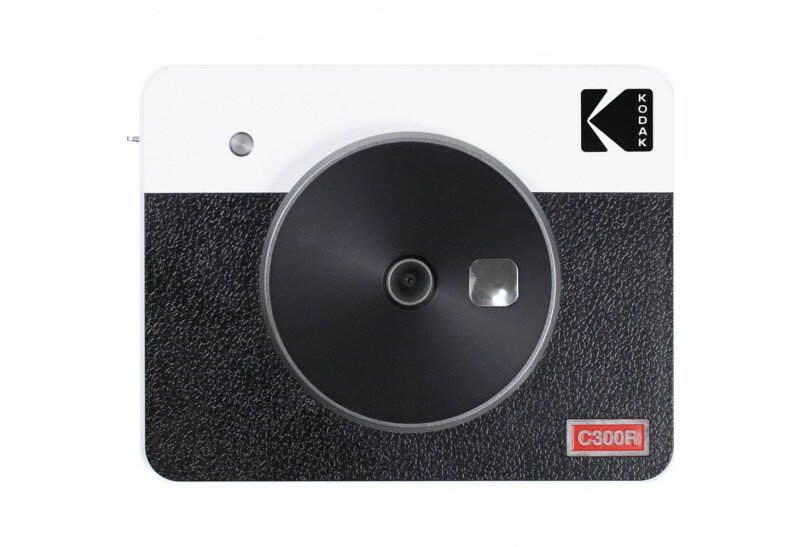 Kodak’s Mini Shot 3 is a tidy little digital instant camera that’s great for anyone who doesn’t want anything too complicated. It houses a tiny printer that uses Kodak’s 4PASS all-in-one cartridges to spit out little square prints, 3 inches by 3 inches. The colors pop a good deal better than some other instant cameras. The camera overall is pretty cheap, and running it isn’t too expensive either, making it a good option if you want to shoot instant on a budget. It also produces 10MP digital photos that you can save via Bluetooth on the app (and you do have to do it this way because there’s no internal storage). A cheap option that’s good fun for anyone. 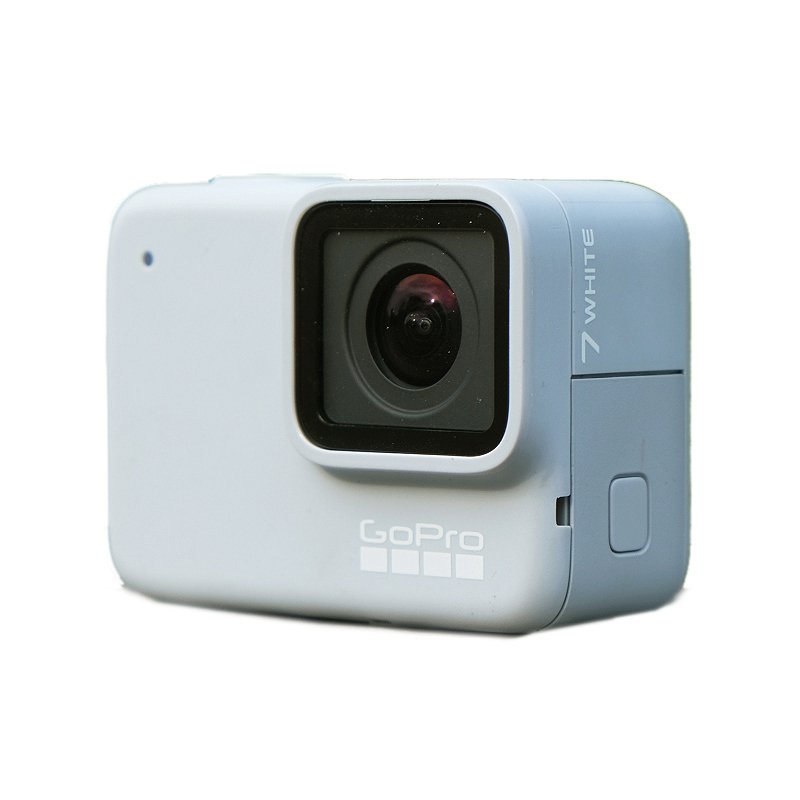 GoPro’s entry-level camera is a cheap and cheerful option that gives you a rugged and waterproof action camera for under £180. Kids will likely be at home with the touchscreen operation, with its simplified settings, making it easy to capture quick videos and photos without much effort. In Addition, it shoots Full HD, rather than 4K, but otherwise for the price it’s actually extremely well featured – making it something the whole family might want to borrow (if they can get near it). Kids will also love the ability to control the camera by voice, telling it to take a photo or record a video while they’re out and about. All in all, it’s the ideal first time little camera to fit neatly into your kid’s life (and their pocket). 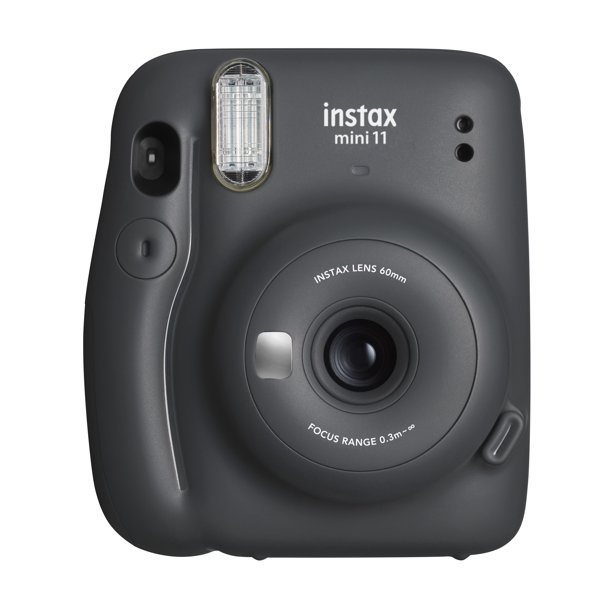 One of the easiest Instax cameras to use, this new version of the trusty Mini series is a great choice for kids. Its Auto Exposure mode produces great results in a range of lighting conditions, and though it can be a bit temperamental sometimes, you’ll likely be mostly pleased with the images it outputs.

Instax Mini 11 prints look great as ever, small, full of fun, and loading them is as easy. The camera is powered by two regular AA batteries, and the flash reliably gives every image a burst of light (and we do mean every image; there’s no way to disable it). Inexpensive, user-friendly and full of fun, kids big and small will have a great time with this one.

Whether you’re looking for a gift for a hard-to-please teen or a camera simple enough for the whole family to use, a low-cost point and shoot camera fits the bill perfectly. Or, if you think you need something tougher, many underwater compact cameras are also shockproof and freezeproof, which covers three household hazards at least. 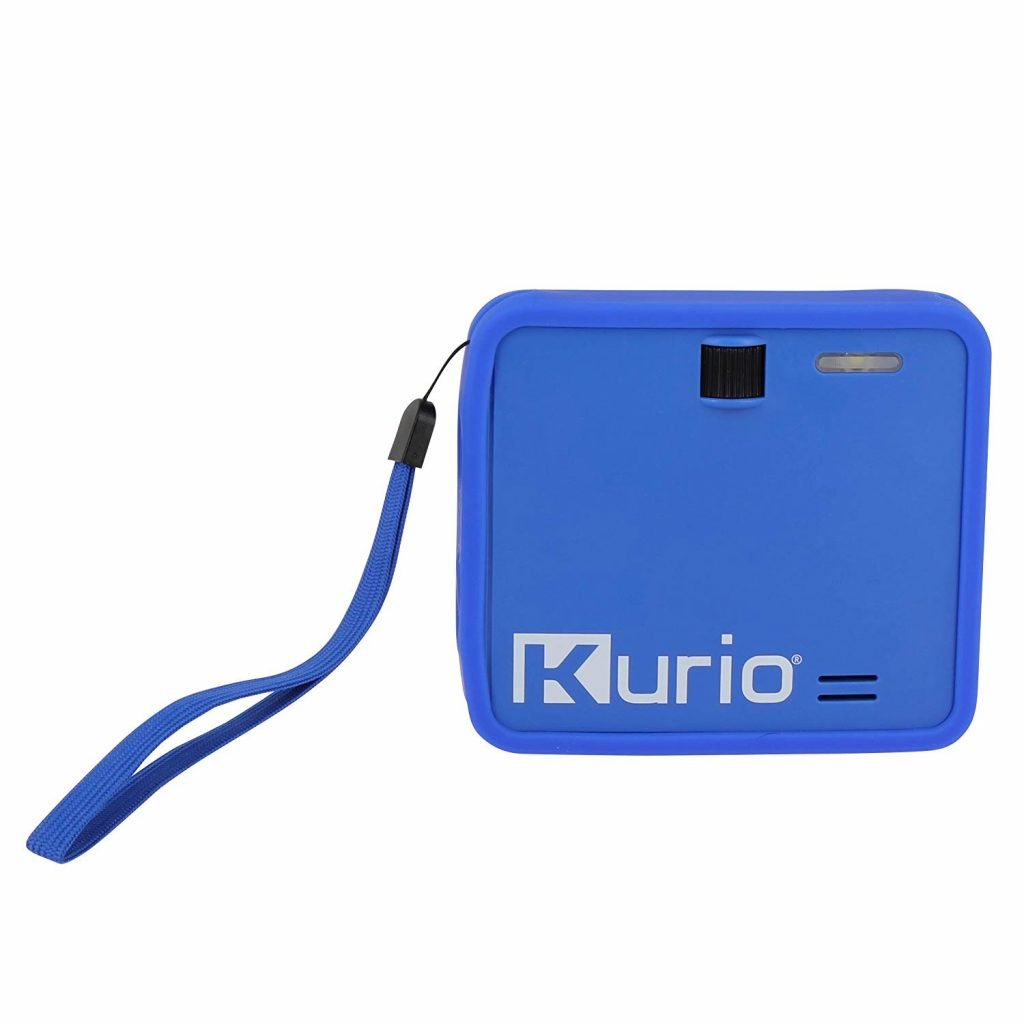 If it’s your little one’s first foray into photography, you may want to break them in gently. The Kurio Snap Digital Camera is just as much of a toy as a camera, allowing kids to take photos and videos, decorate them with more than 100 digital stickers and frame on the device. They can even draw on their photos and create flipbooks and slideshows, which will probably keep them busy for hours.

Little artists can share their creations, play games and listen to music on the gadget, which has a re-chargeable battery and is suitable for kids over the age of 4. It’s not an option for those who have expressed a serious interest in taking photos, but more of a toy for those who just like to express themselves in every way possible. At £79 it’s not a cheap toy, but it does tick a lot of entertainment boxes.