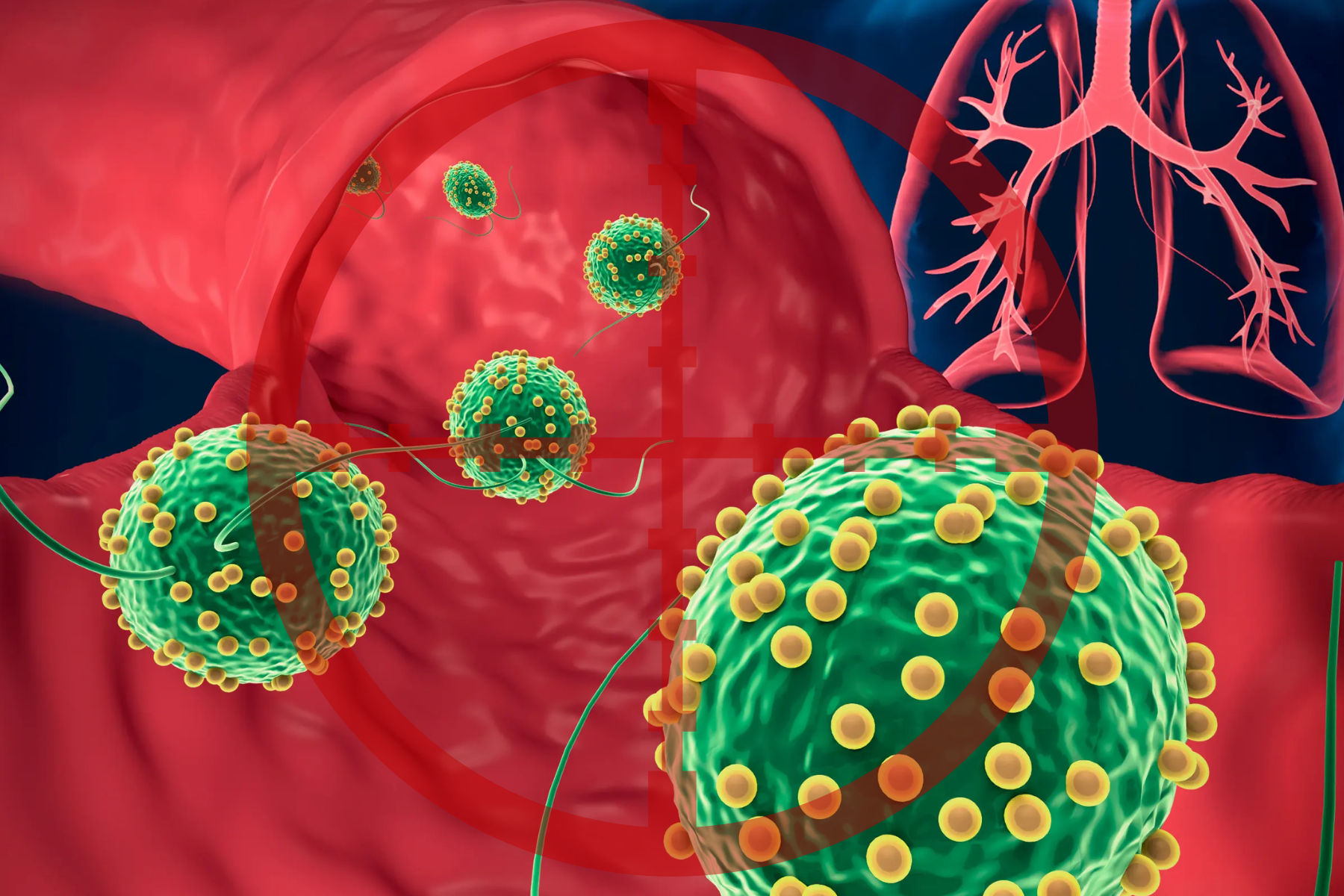 In a new study, a group of nanoengineers made new pneumonia-fighting microbots that could spell the end of the disease.

It is a group of tiny robots that can carry medicine, swim around in the lungs, and treat cases of bacterial pneumonia that are life-threatening.

The microrobots were made by a team at the University of California, San Diego. They were shown to get rid of the bacteria that cause pneumonia in the lungs of mice, and all of them lived.

On the other hand, mice that were not treated died three days after getting sick.

The Algae Is Used To Make The New Tiny Robots

A colored SEM image of a microrobot made of algae cells

The tiny robots were made by attaching special nanoparticles filled with antibiotics to the surfaces of algae cells. Because they are so small, the microrobots could "swim" around and directly give medicines to more lung germs. This was made possible by the algae's ability to move.

Each nanoparticle is made up of biodegradable polymer spheres with cell membranes from neutrophils. Neutrophils are a type of white blood cell that you might not know about.

According to InterestingEngineering, inflammatory chemicals are made by bacteria and the immune system of the body, which makes these cell membranes unique. This is something that the new microrobots can also do, which makes them better at fighting lung infections by reducing inflammation that does damage.

Nanoengineering professors at the UC San Diego Jacobs School of Engineering, Joseph Wang and Liangfang Zhang, worked together on the project.

Together, they've made tiny robots that can deliver drugs and treat bacterial infections in the blood and stomach of living animals. The most recent part of their work is treating lung infections caused by bacteria.

Our goal is to do targeted drug delivery into more challenging parts of the body, like the lungs. And we want to do it in a way that is safe, easy, biocompatible, and long-lasting. That is what we’ve demonstrated in this work.

The scientists then took care of the Pseudomonas aeruginosa-infected mice. This bacteria can cause severe pneumonia, which in some cases can kill the person.

Patients in the intensive care unit who are getting mechanical ventilation often get this type of pneumonia.

Watching this video will give you an idea of how life-threatening pneumonia can be.

Here's Why Pneumonia Is Still So Deadly

The microrobots went to the mice's lungs through a catheter that was put in their windpipe. After a week, all of the infections had been taken care of. Mice that didn't get treated by the microrobots died after three days, but every mouse that got treated by them lived for more than 30 days.

Surprisingly, putting antibiotics into the bloodstream through an IV didn't work as well as the treatment with microrobots.

To have the same effect, the second group needed 3,000 times more antibiotic than what was used in the first group's microrobots. For example, each mouse got 1.644 milligrams of antibiotics from an IV injection, but only 500 nanograms from a dose of microrobots.

The team's plan works so well because the medicine goes straight to where it is needed instead of being spread out over the whole body.

Wang said, that the results show that the therapeutic effectiveness is improved when targeted drug delivery is combined with active movement from the microalgae.

With an IV injection, sometimes only a very small fraction of antibiotics will get into the lungs. That’s why many current antibiotic treatments for pneumonia don’t work as well as needed, leading to very high mortality rates in the sickest patients.

Nizet is also a co-author of the study and works with Wang and Zhang as a doctor and scientists. He said that based on these mouse data, they can see that the microrobots might help antibiotics kill bacterial pathogens and save the lives of more patients.

Even though the new treatment seems a bit invasive, the scientists are sure that it is safe. After treatment, the body's immune cells break down the algae and any leftover nanoparticles in a healthy way.

Wang said, "Nothing dangerous is left behind."

The project's proof-of-concept phase, on the other hand, is still going on. The team wants to do more basic research to find out how the microrobots affect the immune system.

Before it is tried on bigger animals and, eventually, on people, the microrobot treatment will be tested and made bigger through research. Zhang said that they are making more progress in the field of targeted drug delivery.

Summary Of A Study

Bioinspired microrobots that can move actively in biological fluids have gotten a lot of attention for biomedical uses because they have unique dynamic properties that are hard to get with their static counterparts.

Here, they use click chemistry to attach antibiotic-loaded neutrophil membrane-coated polymeric nanoparticles to natural microalgae. This makes hybrid microrobots that can actively deliver antibiotics to the lungs in vivo.

The microrobots move quickly (>110 m s1) in simulated lung fluid and are evenly distributed in deep lung tissues. Alveolar macrophages don't get rid of them very quickly, and they stay in the tissues for a long time (>2 days) after being injected into the trachea of test animals.

In a mouse model of acute Pseudomonas aeruginosa pneumonia, the microrobots reduce the number of bacteria and cut animal deaths by a lot, but they don't hurt the mice at all.

Overall, these results show how algae-nanoparticle hybrid microrobots can be used to deliver medicines to the lungs of people in intensive care units in a way that is both active and in vivo.