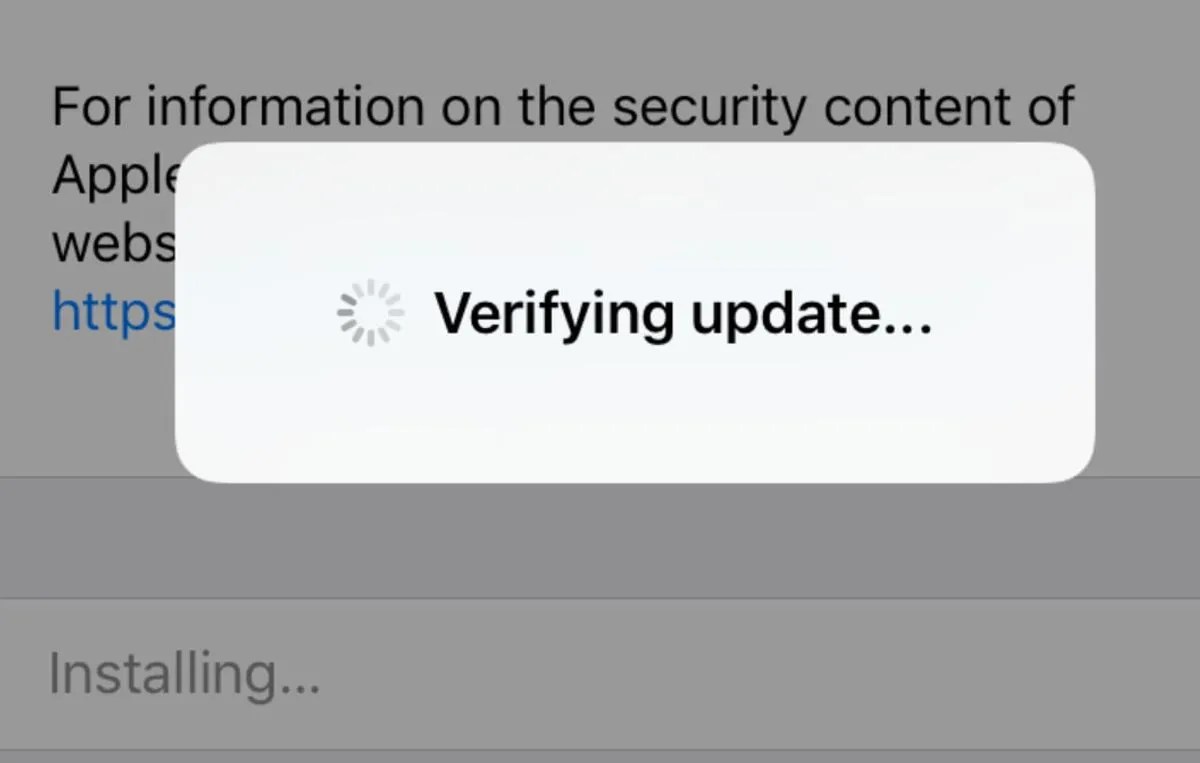 You just tried to install the latest version of iOS, but the “Verifying Update…” pop-up isn’t going away. It’s been on your screen for several minutes, but nothing is happening. This article explains why your iPhone is stuck verifying an update and shows you how to fix this problem for good.

Normally, your device will prompt an update notification if a new software update is available. And if that happens, you have an option to update your iPhone wirelessly. Installing an iOS update via over-the-air (wirelessly) is supposed to be done with a few taps. But things can go wrong and so you will just realize that your iPhone isn’t updating as it gets stuck on verifying the update issue.

How Long Should My iPhone Say Verifying Update?

Unfortunately, there’s no one-size-fits-all answer to this question. It can take your iPhone a few seconds or a few minutes to verify an update depending on a variety of factors, such as the size of the update and your connection to Wi-Fi.

The last time I updated my iPhone, it only took about ten seconds to verify the update. I’ve seen some readers say it has taken their iPhone as long as five minutes to verify an update.

However, if your iPhone has been stuck on “Verifying Update…” for more than fifteen minutes, it’s pretty likely that something has gone wrong. The steps below will help you fix the problem when your iPhone is stuck verifying an update!

If your iPhone shows ample storage space but still can’t install new updates, try the following procedures to rule out other culprits from within your iPhone software.

Make Sure Your iPhone is Connected to a Wi-Fi Network

This step is especially important because you can’t always update your iPhone using cellular data. Larger and more significant updates (such as iOS 11) almost always require using Wi-Fi instead of cellular data.

When an iPhone gets stuck verifying an update, it’s possible that it froze due to a software crash. To fix this, hard reset your iPhone, which will force it to turn off and back on.

The hard reset process varies depending on the model of iPhone that you have:

After hard resetting your iPhone, go back to Settings -> General -> Software Update and try to download and install the software update once again. If your iPhone gets stuck on “Verifying Update…” again, move on to the next step.

Delete the iOS Update File from Your iPhone

It is possible that some segments of the update files have already been downloaded but not completed. As a result, the update gets corrupted. In that case, the corrupted update file must be deleted first.

If you’ve initially downloaded the software update and get stuck on Verifying Update, delete the iOS update file from your iPhone and retry downloading the update again. Here’s how:

If that doesn’t do any good, proceed to the next method.

If you’ve tried all of the steps above, but your iPhone is still getting stuck on “Verifying Update…”, there may be a much deeper software issue causing the problem. By performing a DFU restore, we can attempt to eliminate a deep software problem by erasing and reloading all of the code on your iPhone. Check out our in-depth article on how to perform a DFU restore on your iPhone!

Also read: How to Fix iPhone Stuck in Headphone Mode

Update Your iPhone Via iTunes

If all else fails, iTunes can be deemed as an alternative. Since the update won’t download or install via wirelessly, you can try implementing the update manually. To get started, you will need to secure a Windows or Mac computer with the latest iTunes app installed. The computer must also have a stable Internet connection and sufficient memory space to allocate the updated file. Once everything is set, proceed to these steps to start updating your iPhone through iTunes:

If your iPhone still gets stuck on “verifying update” after exhausting all possible solutions including the above procedures, contact Apple Support for further assistance. There might be an ongoing issue with Apple’s update server like when it’s congested, unavailable, or experiencing technical difficulties at the moment.