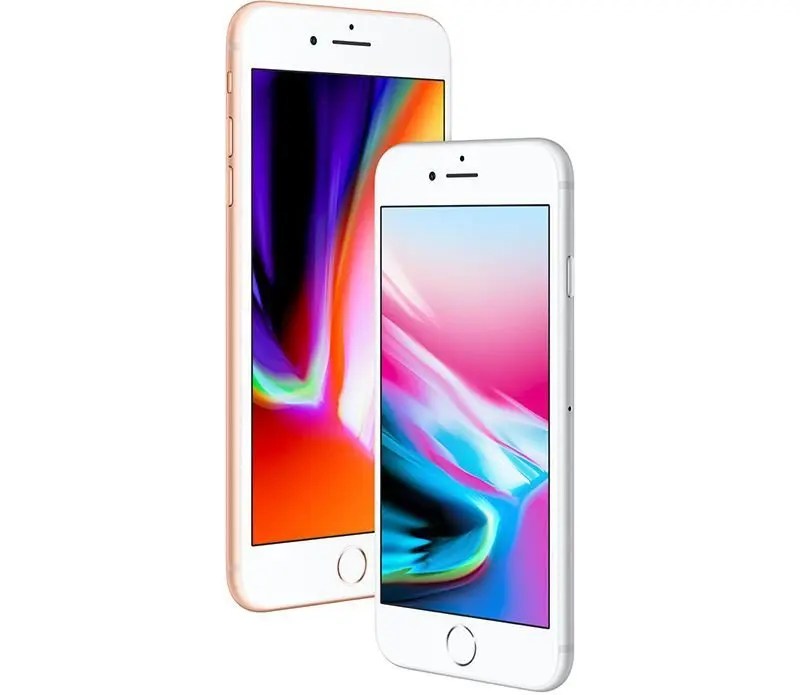 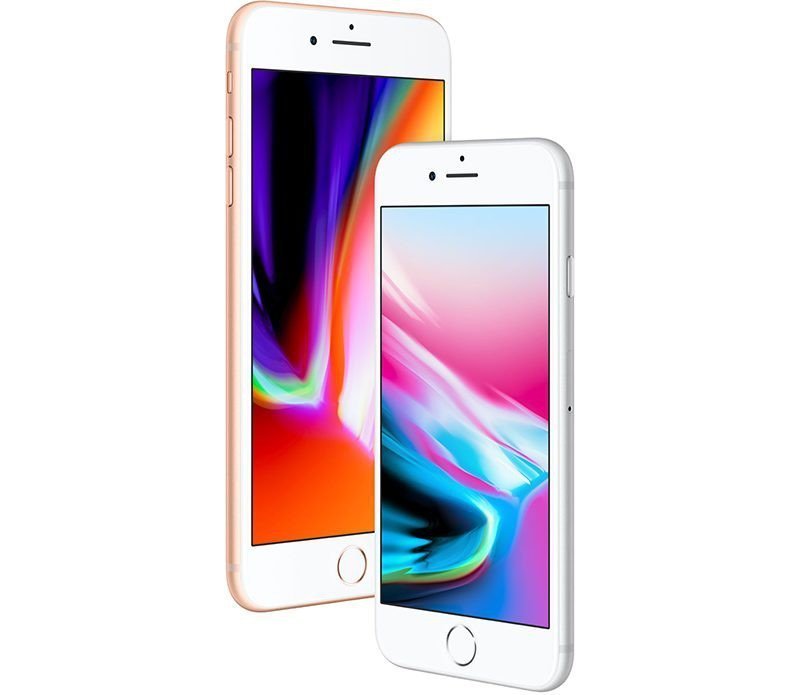 Introduced on September 12, 2017, the iPhone 8 and the iPhone 8 Plus represented a “huge step forward for the iPhone,” according to Apple CEO Tim Cook. The two devices “improve on everything we love about iPhone” with overhauled internals and a tweaked design, but the changes introduced were not as dramatic as the changes brought to the iPhone X, launched alongside the iPhone 8 series.

The new iPhone 8 and iPhone 8 Plus are successors to iPhone 7 and iPhone 7 Plus — featuring glass backs, wireless charging and better cameras — whilst the iPhone X grabs headlines with a new ‘edge-to-edge’ 5.8-inch OLED screen and facial recognition unlock.

There’s also a upgraded image signal processor built into the A11 that brings better low light performance, including faster autofocus, and there are new pixel processing techniques for sharpness pixel texture.

All three new iPhones come in at higher price points than any previous top-tier iPhone, but base storage has been bumped to 64 GB to compensate.

Presently available in three colors, Silver, Space Gray, and Gold, the iPhone 8 series featured the most durable glass ever in a smartphone in a reinforced steel and aluminum structure that is IP67 water and dust resistant. The stereo speaker setup in the device was updated to be 25 percent louder with deeper bass.

The iPhone 8 includes a 4.7-inch display, while the iPhone 8 Plus features a larger 5.5-inch display. Both displays were upgraded with True Tone support, designed to adapt color temperature and intensity to the ambient light in a room for a more natural, paper-like viewing experience. 3D Touch and P3 wide color support for a greater range of colors continue to be available.

Apple chose glass for the body of both iPhones to enable a Qi-based inductive wireless charging feature, which allows the two devices to be charged when placed atop any Qi-certified inductive charger. 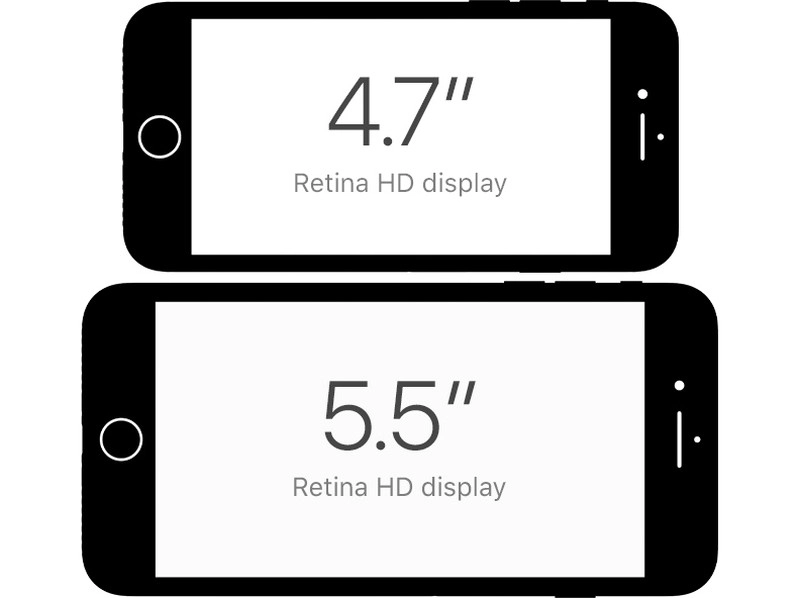 iPhone 8 features a new glass design on front and back surrounded by an aluminum frame. The glass frame provides a new look for the phone on the back side and enables wireless inductive charging.

The iPhone 8 and the iPhone 8 Plus might look a lot like the iPhone 7 and 7 Plus, but the glass body is a major distinguishing feature. According to Apple, the front and back glass is the most durable it’s ever made. The two devices come in Silver, Space Gray, and a new shade of Gold that’s a little bit rosier than the traditional gold shades.

In terms of color choice, iPhone 8 and 8 Plus come in Space Gray, Silver and a new fresh Gold finish.

On the left side of the iPhone 8 and 8 Plus, there’s a mute switch and volume buttons, and the right side houses the sleep/wake button. At the bottom, there’s a Lightning port and speaker holes. Like the iPhone 7 and iPhone 7 Plus, the two new devices have no headphone jack and require Lightning headphones or Bluetooth headphones.

At the rear, the iPhone 8 continues to feature a single-lens protruding camera, while the 8 Plus features a wider dual-lens rear camera arranged in a horizontal orientation.

Like the previous-generation iPhones, the iPhone 8 and the iPhone 8 Plus are water and dust resistant. An IP67 dust/water resistance rating means the two devices are entirely dust proof and able to withstand 1 meter of water (3.3 feet) for up to 30 minutes.

While the iPhone X features no Home button and thus no Touch ID, the iPhone 8 and 8 Plus both have Touch ID functionality, making them an excellent choice for customers not ready to give up fingerprint-based authentication in favor of the new facial recognition function in the iPhone X. 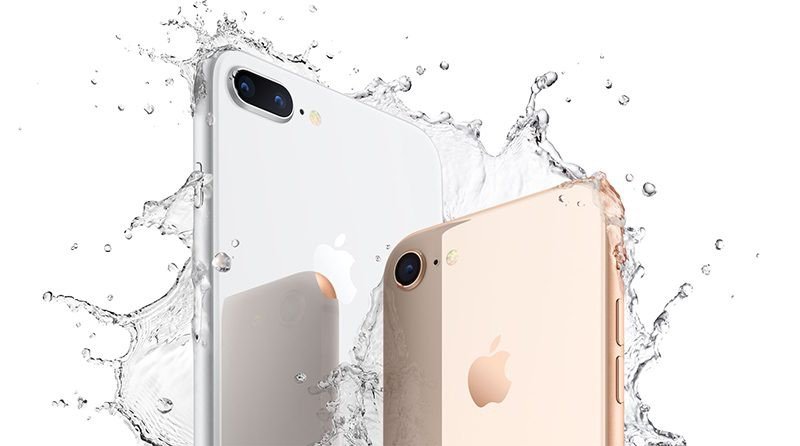 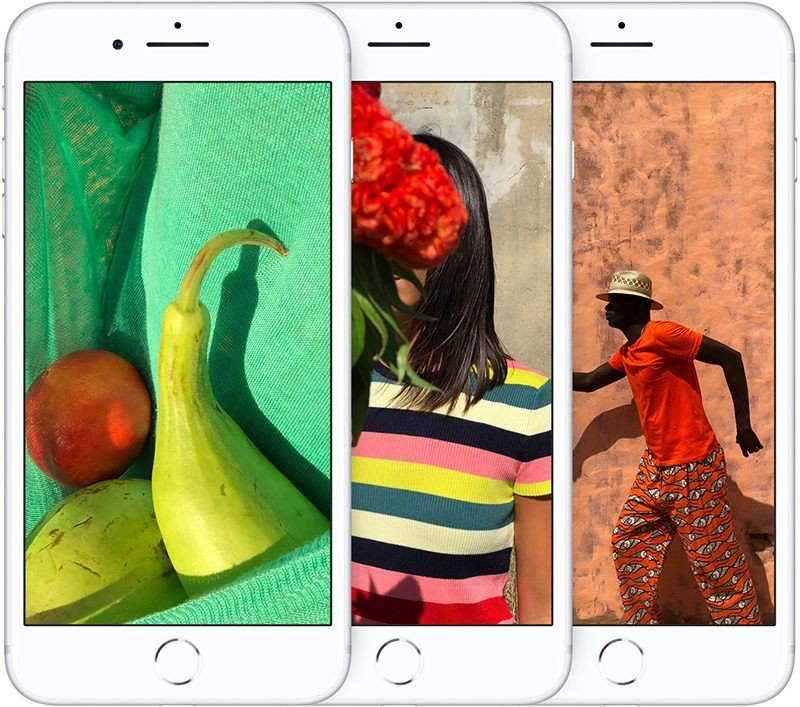 Both devices offer support for P3 wide color for rich, true-to-life colors and 625 cd/m2 max brightness, identical to the previous-generation iPhone 7 and iPhone 7 Plus.

New in the iPhone 8 and 8 Plus is the True Tone feature that was first introduced in the iPad Pro. True Tone uses the ambient light sensor to detect the lighting in a room, adjusting the color temperature and intensity to match the light for a more natural viewing experience. 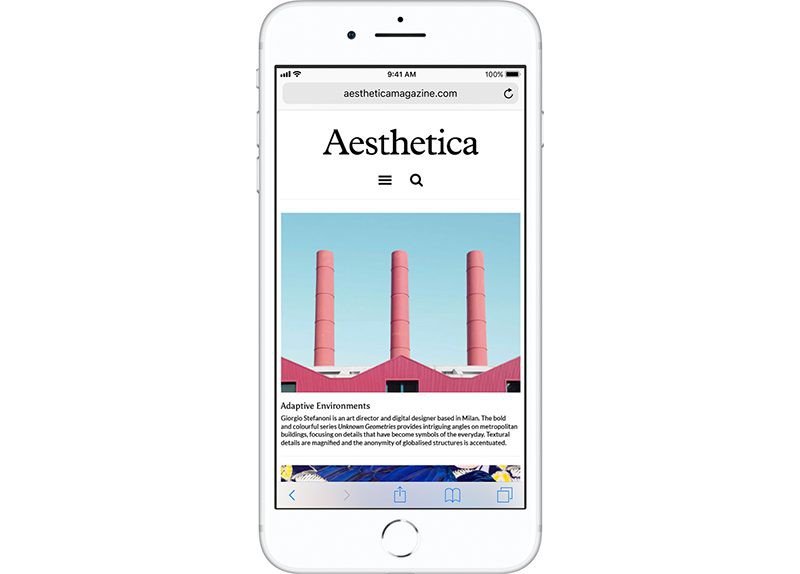 True Tone is designed to make the iPhone’s display appear more paper-like when reading for more comfort and less eyestrain.

Apple says the A11 Bionic processor in the iPhone 8 and 8 Plus is the most powerful and smartest chip that’s ever been introduced in a smartphone. It features a six-core CPU with two high performance cores and four high efficiency cores.

iPhone 8 features an Apple A11 ‘Bionic’ chip, to provide up to 25% better performance compared to the A10 Fusion chip found in the iPhone 7. 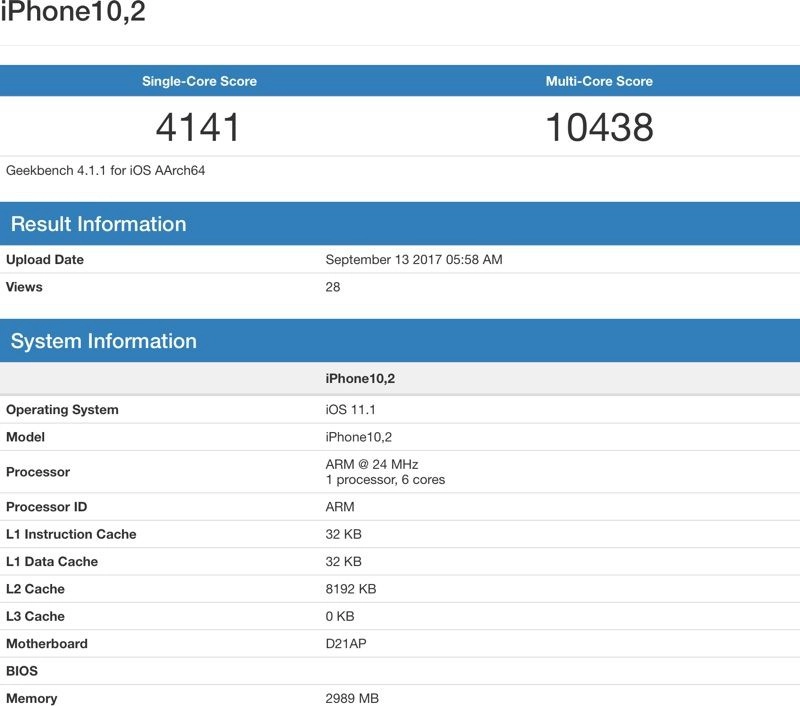 The A11 chip includes a new Apple-designed three-core CPU that’s 30 percent faster than the GPU in the A10 chip, introducing much improved graphics performance. There’s also an embedded M11 Motion coprocessor that captures motion-based data from the compass, accelerometer, and gyroscope to power fitness capabilities, augmented reality experiences, and more, without significant power drain.

The glass bodies of the smartphones enable an inductive wireless charging feature, which is new to Apple’s iOS device lineup. Apple has adopted the Qi open wireless charging standard that’s built into many Android devices, so the iPhone 8 and 8 Plus can charge wirelessly using any Qi-certified charging accessory. 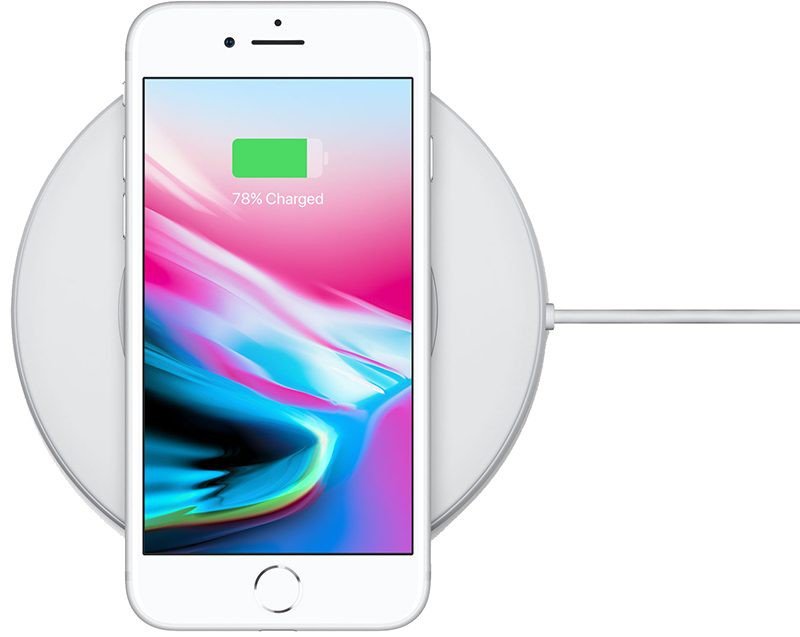 Qi charging is inductive, which means the iPhone 8 and iPhone 8 Plus must be placed on a charging mat or similar accessory to be able to charge. While physical contact is required, the wireless charging feature works with most cases.

The iPhone 8 features a more advanced 12-megapixel wide-angle f/1.8 camera with a larger, faster sensor that lets in 83 percent more light. Other features include a new color filter and deeper pixels for better color saturation, a wider dynamic range of color, and lower noise in photos and videos.

There’s a quad-LED True Tone Flash with a Slow Sync feature that combines a slow shutter speed with a strobe pulse for a brighter foreground subject and properly exposed background in low lighting conditions. The flash also offers more uniform illumination for better performance all around.

The larger iPhone 8 Plus continues to offer a dual-lens camera setup with both an f/2.8 telephoto lens and a f/1.8 wide-angle lens, both of which have upgraded sensors. Optical image stabilization continues to be available for the iPhone 8 and the wide-angle lens in the 8 Plus. 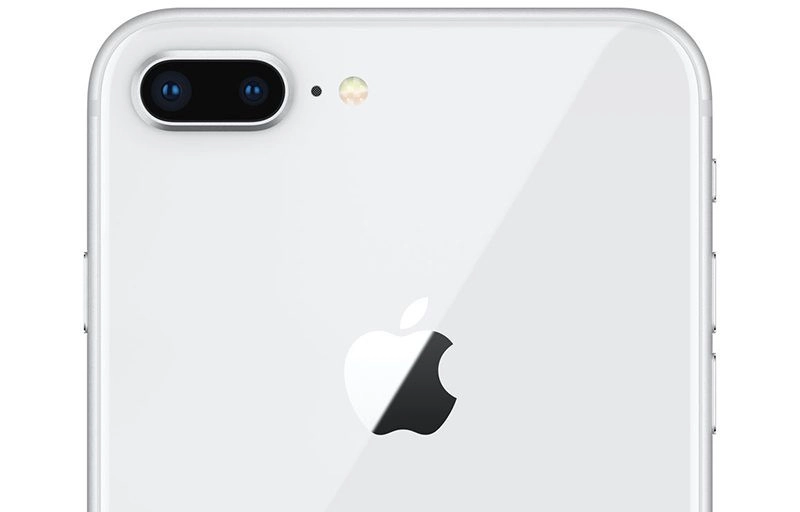 With improvements in the iPhone 8 Plus, there’s sharper detail, more natural background blurring, better performance in low light, and support for flash.

New to Portrait Mode in the iPhone 8 Plus is a new Portrait Lighting feature that lets you add studio quality lighting effects to your images. To enable Portrait Lighting, the two cameras create a depth map of an image, using machine learning techniques to mark the presence of a face and how the light in a scene interacts with the face.

Along with the image signal processor that reduces noise and allows autofocus to work more quickly in low light, there’s also a new Apple-designed video encoder that enables faster video frame rates and real-time image and motion analysis that can predict changes in content to optimize video encoding algorithms.

At the front of the iPhone 8 and 8 Plus, there’s a 7-megapixel f/2.2 aperture FaceTime HD camera for selfies and FaceTime conversations. The camera includes wide color capture, auto image stabilization, 1080p HD video recording, and Retina Flash that uses the display. 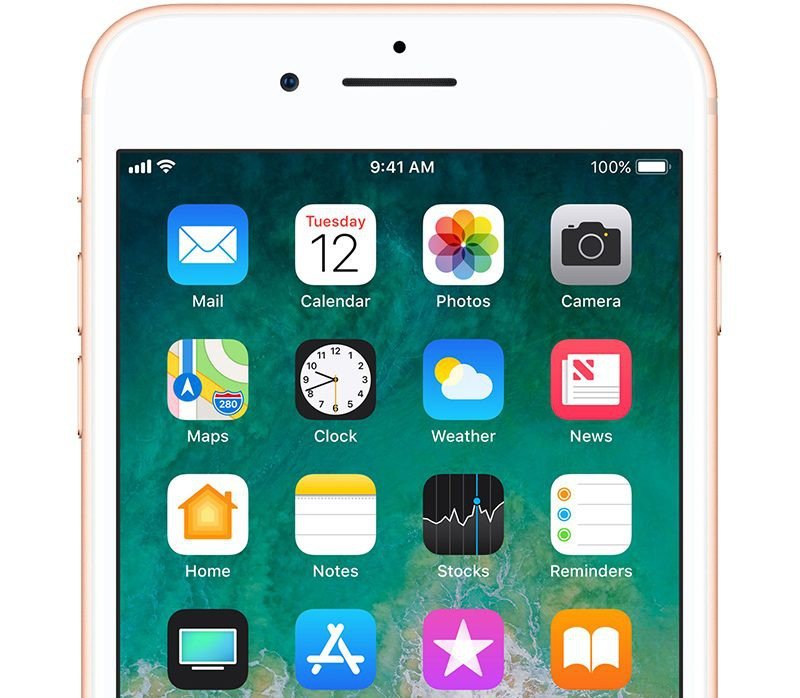 The iPhone 8 has an 1,821mAh battery, while the iPhone 8 Plus has a 2,675 mAhbattery. That’s smaller than the 1,960mAh and 2,900 mAh batteries found in the iPhone 7 and iPhone 7 Plus, but there is no difference in battery life due to other optimizations.

The iPhone 8 and 8 Plus are “fast-charge capable,” meaning they can be charged to 50 percent battery life in 30 minutes. Fast charging requires the iPhone 8 to be plugged into Apple’s 29W, 61W, or 87W USB-C Power Adapters, which are sold alongside its USB-C MacBook and MacBook Pro models.

A USB-C to Lightning cable is also required to go along with the USB-C Power Adapter, and the minimum price for those accessories is $74.Augmented Reality

Apple designed the iPhone 8 lineup with augmented reality in mind. The cameras are calibrated for AR, there’s an updated gyroscope and accelerometer to enable more accurate motion tracking, and the A11 Bionic offers world tracking and scenes while the GPU renders realistic graphics and the image signal processor offers real-time lighting estimation. iOS 11 introduced hundreds of new AR apps designed using ARKit, all of which can be experienced on iPhone 8 and 8 Plus.

Both iPhones support LTE Advanced for data transfer speeds up to 600Mb/s. There are more than 20 LTE bands available, which makes the two devices more likely to be able to work with networks in other countries when traveling.

As with the previous-generation iPhone 7 and the iPhone 7 Plus, Apple is using both Intel and Qualcomm chips, some of which are not compatible with the CDMA networks of Verizon and Sprint in the United States.

The iPhone 8 and 8 Plus support 802.11a/b/g/n/ac Wi-Fi with MIMO. The technology is the same as the Wi-Fi technology in the iPhone 7 and 7 Plus, with connection speeds that can reach a theoretical maximum of 866Mb/s. 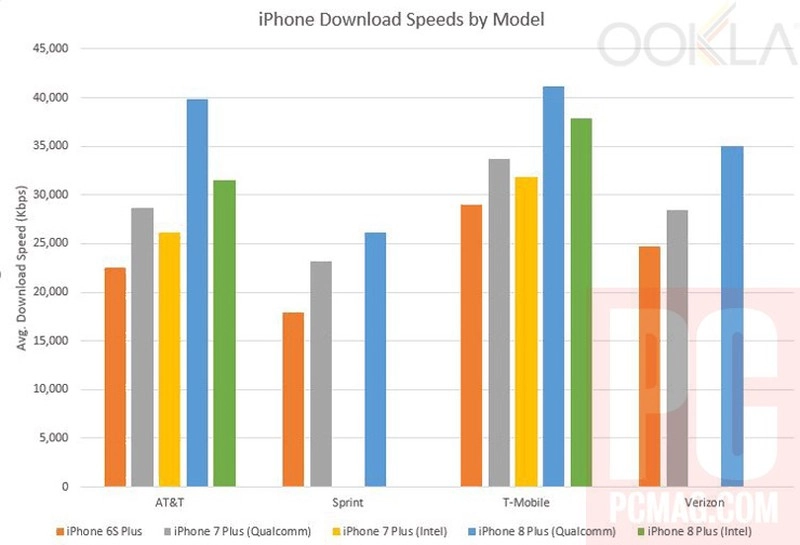 Support for the new Bluetooth 5.0 standard is built into the devices. Bluetooth 5.0 offers four times the range, two times the speed, and eight times the broadcast message capacity compared to the previous Bluetooth 4.2 standard.

In addition to the Global Positioning System operated by the U.S. government, the iPhone 8 and 8 Plus add support for Galileo, Europe’s Global Satellite Navigation System, and QZSS, the Quasi-Zenith Satellite System used in Japan.

As for NFC, there’s a new NFC chip with reader mode support that lets the iPhone 8 and 8 Plus read NFC tags installed in places like retail stores, museums, and more.

Both iPhones can be purchased from the online Apple Store or in Apple retail stores around the world. Carrier stores and big box retailers like Target and Best Buy also offer the iPhone 8 and 8 Plus in the United States.

The iPhone 8 was replaced by the iPhone XS, XS Max, and XR in September of 2018. Apple is now selling the iPhone 8 at a reduced starting price of $599 and the iPhone 8 Plus starting at $699