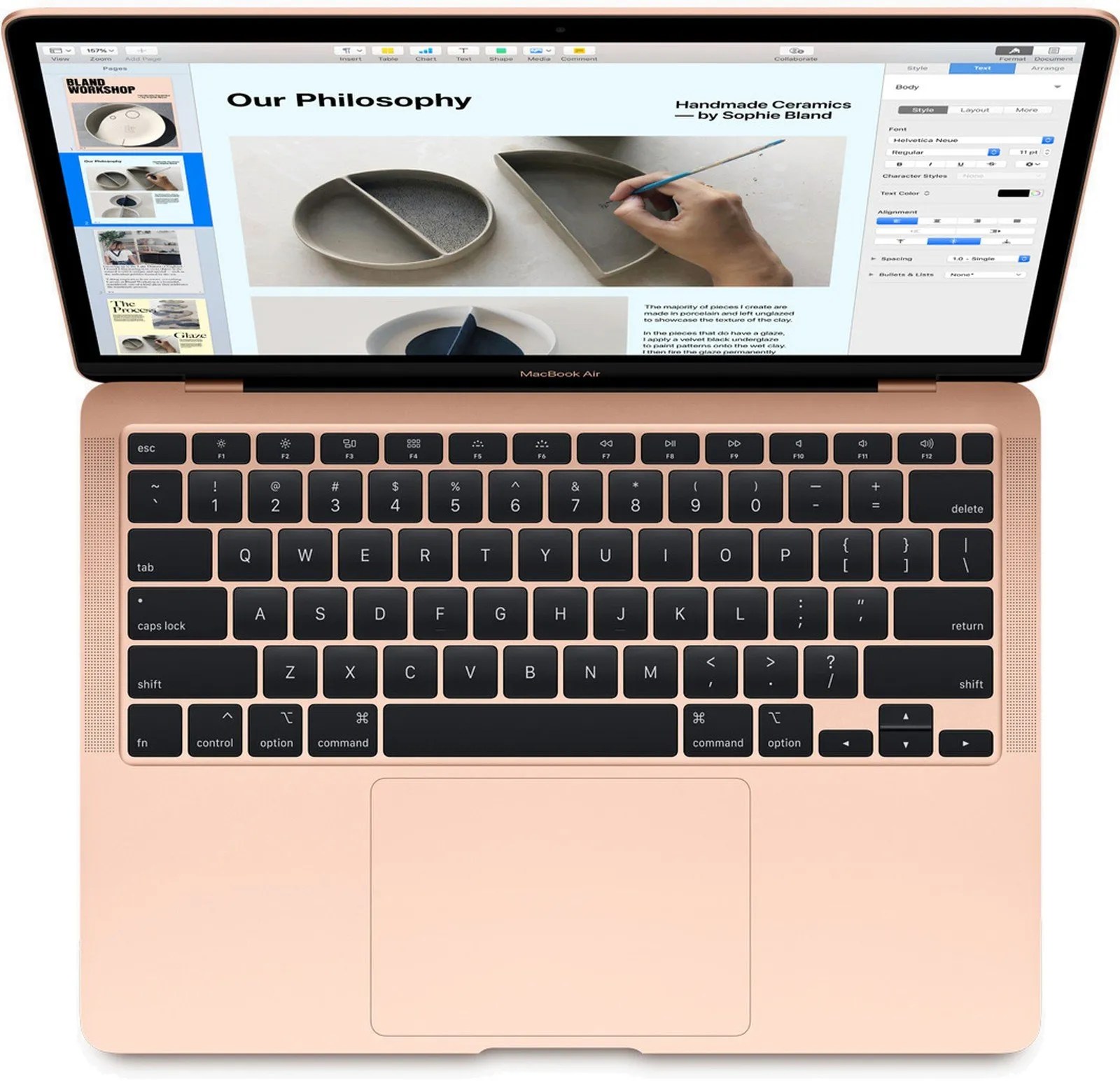 The main new feature in the MacBook Air is the new Magic Keyboard, first introduced in the 16-inch MacBook Pro. The Magic Keyboard features a refined scissor mechanism that’s more reliable than the previous butterfly mechanism, and it offers up to 1mm of key travel for a stable key feel.

Apple’s 2020 MacBook Air is equipped with Intel’s 10th-generation processors that offer up to 1.2GHz quad-core Core i7 performance and Turbo Boost speeds up to 3.8GHz. Apple says the new chips provide up to two times faster CPU performance and 80 percent faster graphics performance with Intel Iris Plus Graphics.

Like prior MacBook Air models, the 2020 MacBook Air includes a T2 chip and a Touch ID fingerprint sensor to use in lieu of a password. The T2 chip makes the MacBook Air more secure with an SSD controller for on-the-fly data encryption and a Secure Enclave to ensure a secure boot process. Through the T2 chip, always-on “Hey Siri” functionality is available.

“The default configuration ships with a tenth-generation 1.1GHz dual-core Intel Core i3 … For even basic users, however, I’d recommend adding $100 back onto the system price in order to upgrade to an i5,” explains Brian Heater for TechCrunch. “The system scored 5244 and 14672 on Geekbench 4’s single and multi-core tests, respectively, presenting a marked upgrade over the last model we tested, back in 2018.”

“The entry-level model comes with a Core i3, but the model I tested included the more powerful Core i5 option, which is a $100 upgrade,” writes Todd Haselton for CNBC. “It felt fast enough for me and I didn’t see any slowdowns while running a bunch of apps, like Apple TV+, lots of tabs in Chrome, Slack and photos at once.”

“As for speed, I’ve been using a mix of Chrome, Safari, Notes, Spotify, Photos and Slack, with a few App Store downloads,” on a Core i5 machine, describes Dana Wollman of Engadget. “Performance has mostly been brisk, though I noticed a slight delay when I rotated some pictures clockwise from the main feed inside the Photos app.”

“We’ve found early performance to be pretty impressive – even when loading up the RAM-hungry Chrome, filling it with 25 tabs and then trying to edit photos on the side,” writes Gareth Beavis for TechRadar. “We noticed very little in slowdown at all in terms of switching between tasks.”

The first reviews of Apple’s new and improved MacBook Air are out just days after its official unveiling. It will come as no surprise to fans of the machine that each one has great things to say about Apple’s most popular notebook.

New configurations, increased storage, a reduced price, and — most importantly — and brand-new Magic Keyboard make this a stellar MacBook Air upgrade. Still not sure? Here’s what the critics have to say…

The 2020 MacBook Air features no design changes compared to the 2019 MacBook Air. It continues to be made from an Apple-designed aluminum alloy that uses 100 percent recycled aluminum and it is available in Silver, Space Gray, and Gold.

The top of the display features a 720p FaceTime HD camera and a three microphone array.

With over 4 million pixels and a resolution of 2560×1600, the MacBook Air’s display is bright and crisp with vivid images and sharp text. The display supports True Tone, which matches the white balance of the screen to the ambient lighting in the room, resulting in a more natural viewing experience. 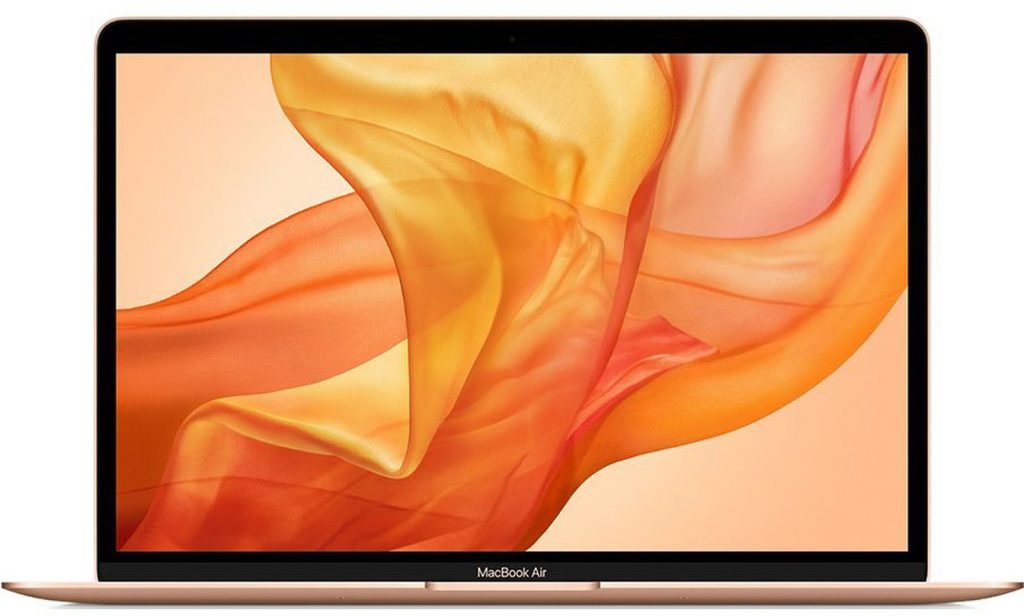 True Tone works through a multi-channel ambient light sensor that’s included in the MacBook Air models, which is able to determine both the brightness of the room and the color temperature.

There is one improvement that’s more important — for most users — than all the rest, though. That’s the Magic Keyboard, which makes the MacBook Air only the second Apple notebook, following the 16-inch Pro, to get one.

The scissor mechanism in the MacBook Air’s keyboard offers 1mm of key travel and a stable key feel, plus it uses an Apple-designed rubber dome that stores more potential energy for a more responsive key press. 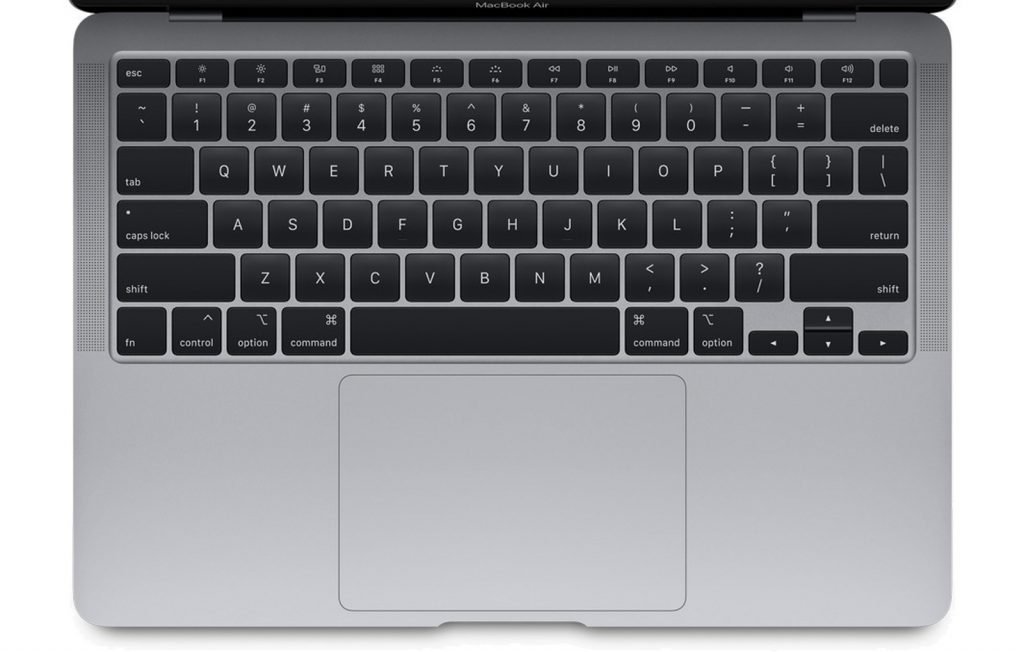 The keyboard also features backlit keys controlled by an ambient light sensor to light up the keys in dark rooms.

Some reviewers say it’s the primary reason you should consider upgrading.

“I’m pleased to report that the new keyboard is a vast improvement,” Haselton writes. “I’ve been using a 2018 MacBook Air for two years and, over time, it started to get jammed due to the older butterfly-design … But the new one is much more pleasant to type on. The keys feel like they have more give to them when you press down, and I was immediately typing with fewer typos.”

“It’s a big improvement on the long-suffering butterfly keyboard found in most Macs in recent years, which has been plagued by breakdowns and general consumer dissatisfaction,” notes Ackerman. “The keys sit visibly higher. They feel more substantial. There’s a satisfying heft to typing, and unlike the previous version you’ll never wonder if a keystroke registered.”

“It’s like night and day, honestly,” explained Heater. “The butterfly mechanisms were a clear misstep for the company … feeling here is pretty similar to what you get with Apple’s Bluetooth Magic Keyboard peripheral. Honestly, that makes it a valuable upgrade in and of itself.”

Apple’s 2020 MacBook Air includes a large Force Touch trackpad that has no traditional buttons and is instead powered by a set of Force Sensors, allowing users to press anywhere on the trackpad to get the same response. 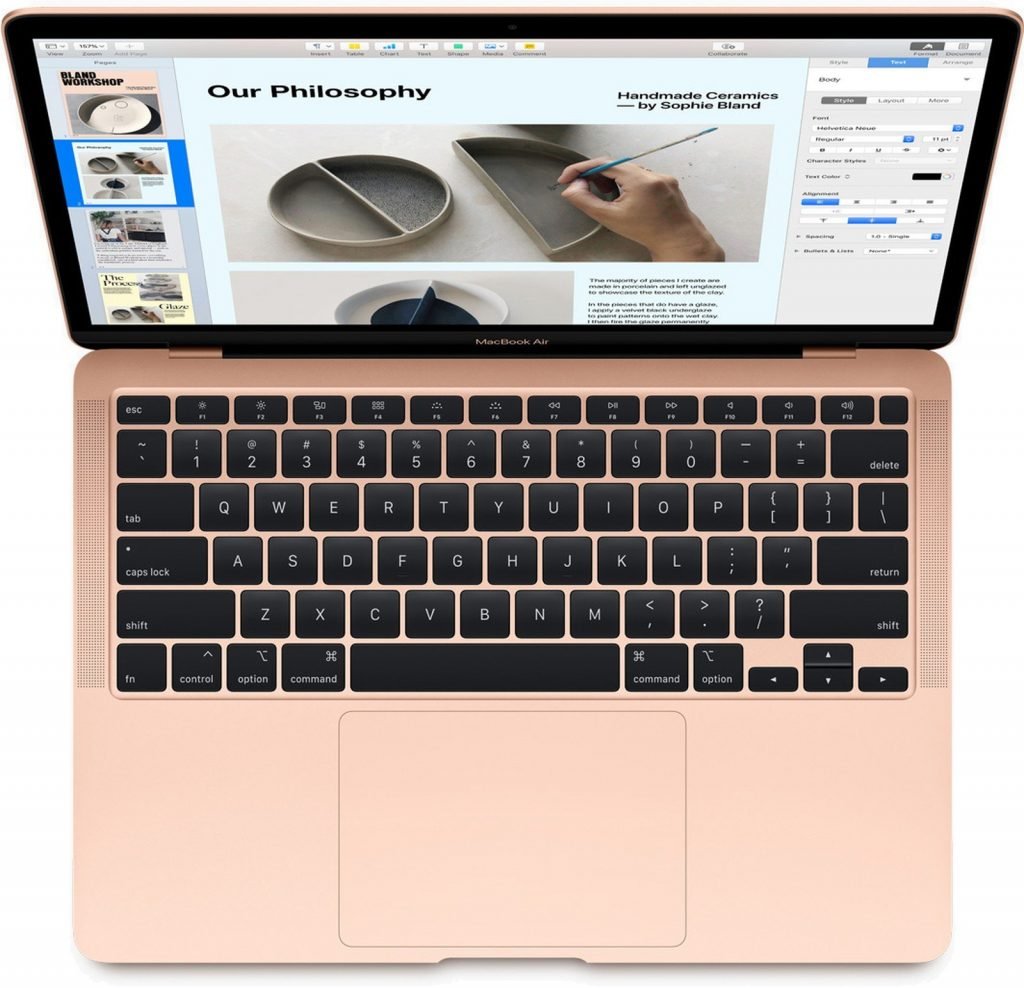 A Taptic Engine powered by magnets provides users with tactile feedback when using the trackpad, replacing the feel of a physical button press. The Force Touch trackpad supports a light press, which is used as a regular click, along with a deeper press or “force click” as a separate gesture that does things like offer up definitions for a highlighted word.

6K display support is new to the 2020 MacBook Air and allows it to work with the Pro Display XDR and other 6K displays. The MacBook Air supports a single 6K monitor, a single 5K monitor or two 4K monitors.

Along with the two Thunderbolt 3 ports, there’s a 3.5mm headphone jack on the other side of the device. Other than that, there are no additional ports on the MacBook Air, with Apple having removed the USB-A ports and SD card slot seen in MacBook Air models prior to 2018.

The 2020 MacBook Air models are equipped with Intel’s 10th-generation Intel Core processors up to 1.2GHz quad-core Core i7 with Turbo Boost speeds up to 3.8GHz and Intel Iris Plus Graphics. This is the first time that Apple has offered a quad-core processor for the MacBook Air. 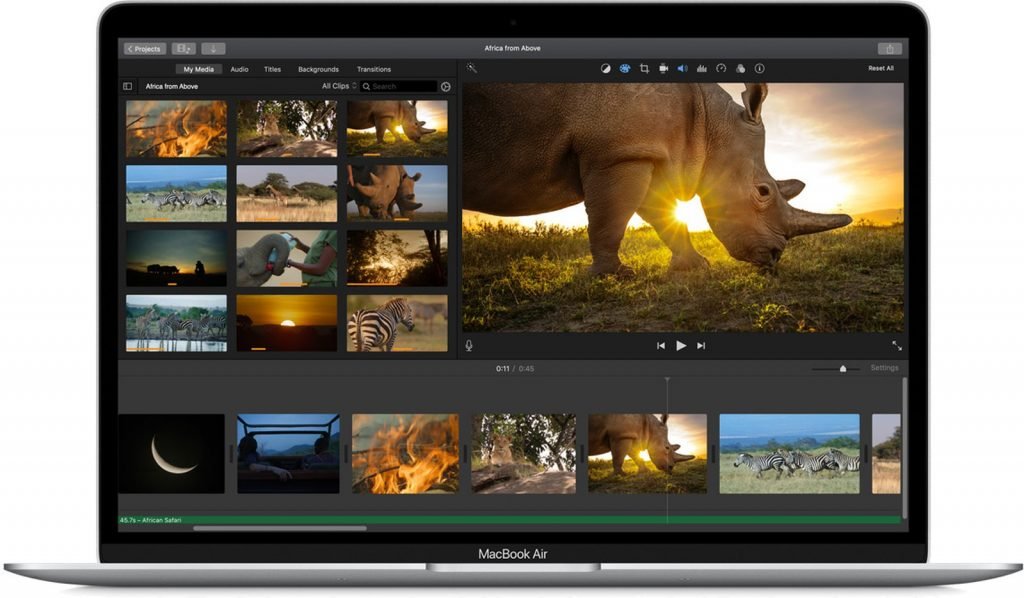 Benchmarks suggest the MacBook Air with 1.1GHz quad-core Core i5 processor is approximately 76 percent faster than the 2018-2019 MacBook Air models.

Base models of the MacBook Pro ship with 8GB of 3733MHz RAM, but they can be customized with 16GB of RAM.

The MacBook Air features a T2 chip that has a built-in Secure Enclave to protect your Touch ID information, and it also offers on-the-fly data encryption for everything stored on your SSD.

In addition to these security features, the T2, which is a separate little chip in your MacBook Air, enables an always-on “Hey Siri” feature so it listens for the “Hey Siri” command and there’s no longer a need to click on the Siri button to activate Siri.

The 2020 MacBook Air has a Touch ID fingerprint sensor that’s located next to the function keys at the top of the keyboard. Touch ID is powered by the T2 chip with a Secure Enclave that keeps your fingerprint data and personal information safe.

Touch ID on the MacBook can be used instead of a password, unlocking the Mac when a finger is placed on the sensor. It also replaces a password for password-protected apps, and it can be used to make Apple Pay purchases in Safari.

Like all of Apple’s mobile devices, the MacBook Air promises plenty of use in between charges. Apple says you’ll get a full day, but how accurate are those claims? According to reviewers, battery life is decent.

“Interestingly, the stated battery life has actually contracted, from 12 down to 11 hours,” Heater explains. “After several hours, I’m down to 35% left. I’ve had the brightness and everything else at default levels and have mostly been typing, using Chrome and Slack and listening to music on headphones via Spotify (along with the occasional benchmark).”

“All-day battery life seems like a fair enough description when you’re multitasking; 11 hours is probably a stretch,” Heater adds. “t’s worth noting that this can vary quite a bit based on a number of factors.”

“I’ve only had the new MacBook Air for about a day, so I’m still fiddling with battery life to see how long it’ll run,” writes Haselton. “But, it seems to be good enough to get through most of a workday so long as I keep the brightness at about half max.”

“I’ve had the machine unplugged for close to three hours, and I still have 70 percent battery left,” Wollman describes. However, “that figure quickly plummeted to 59 percent during a brief Google Hangouts call in Chrome and then started draining more slowly again after I was done.”

There’s a 720p HD camera built into the front of the MacBook Air for FaceTime calls. Apple has used a 720p front-facing camera for multiple years now and has not upgraded the quality.

The MacBook Air uses solid stage storage with capacities up to 2TB. Storage in the base level MacBook Air starts at 256GB, which is twice as much as the base starting storage included in the 2019 MacBook Air models.

Pricing on the MacBook Air starts at $999 for a 1.1GHz dual-core 10th-generation Core i3 processor, 8GB RAM, and a 256GB SSD. Higher-end options and built-to-order upgrades are also available.

The new MacBook Air is available to order from Apple’s online store or the Apple Store app.